Melissa Kuiper’s short story collection, The Whole Beautiful World, was published in 2017 with Brindle & Glass and reviewed in Image 99 by Samuel Martin. Melissa’s fiction and non-fiction have appeared in The Puritan, Ryga, Joyland, The Rusty Toque and Qwerty. She has an MA in Creative Writing from University of Toronto. In addition to…

I used to steal away into the sanctuary of Community United Methodist Church when I was a kid—this is fifth, maybe sixth grade—and lay on my back in the cool wooden pews, staring up at the ceiling with nothing short of wonder. (Note: this wasn’t on Sunday morning or Wednesday evening or any other time…

My parents were supposed to spend the last week at the United Methodist Church General Conference in St. Louis. Dad, who’s served as a UMC minister for the past forty-two years, joked that he wanted to be there to see the church either go down in flames or rebuild itself from the ashes, depending on… 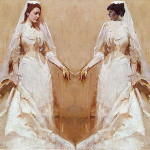 No union is more profound than marriage, for it embodies the highest ideals of love, fidelity, devotion, sacrifice, and family. In forming a marital union, two people become something greater than once they were. As some of the petitioners in these cases demonstrate, marriage embodies a love that may endure even past death. It would misunderstand these men and women to say they disrespect the idea of marriage. Their plea is that they do respect it, respect it so deeply that they seek to find its fulfillment for themselves. Their hope is not to be condemned to live in loneliness, excluded from one of civilization’s oldest institutions. They ask for equal dignity in the eyes of the law. The Constitution grants them that right.

Quite a few commentators have noted the beauty and elegance of this statement’s prose (not a given for Justice Kennedy, who’s been known to drift toward the purple with his pen). Jordan Weissmann, for instance, titled a post for Slate “The Beautiful Closing Paragraph of Justice Kennedy’s Gay Marriage Ruling.”