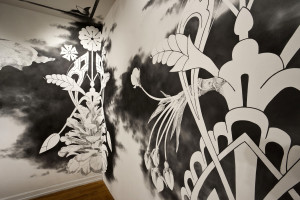 Artist Natalie Settles, featured in the most recent issue of Image, “Evolution and the Imago Dei” , has long been fascinated by the biological sciences. She makes drawings and installation art that mix highly detailed botanical and zoological imagery with highly stylized forms, like Victorian decorative motifs. Her installation works are interactive; they use a gallery space to create an ecosystem in which the viewer becomes a participant. We asked her about her interest in the sciences, the temporary nature of her work, and the way she uses color.

Image: In his profile of you in Image, Mark Sprinkle writes about your collaboration with Stephen Tonsor, an evolutionary biologist at the University of Pittsburgh. How did that come about?

Natalie Settles: We met up when I contacted him about his work and research after I’d been living here in Pittsburgh for about a year and a half.

I moved to Pittsburgh from Madison, Wisconsin, where I had been in personal and professional community with a range of folks in art and science through my graduate school experience and life there for nearly ten years. Madison plays host to one of the powerhouse universities for biological and other sciences, and so I had become accustomed to being immersed in a community full of science and scientists.

When I came to Pittsburgh, the culture was much more diverse and the culture of science much less pervasive, though still present. While I plugged into the art scene and began going to shows, I also noticed myself perusing the websites of the various biology labs and even wandering out of the studio to catch interesting lectures in the university bio departments. After a year and a half there came a tipping point when I knew I needed to either consider this a curious but distracting habit and set it aside, or engage my interest more intentionally.

I’d noticed a lab whose work seemed to be driven by some of the broader questions that motivated my own studio practice—life in the margins, forms shaped by place, the ideal and the compromised, things that are compelling and powerful and also fleeting. This was Steve’s lab.

One evening while we were walking the hilly streets of Pittsburgh, a friend urged me to get in touch with Steve to see what would happen. The next day I emailed him and told him I was an artist and was interested in his work. A couple days later, we met for a two-hour chat over coffee; now, four years later, the rest is history.

Image: You’ve been involved in several recent initiatives geared towards bringing art and science into dialogue, including the National Academy of Sciences’ DASER forum. It’s not hard to imagine a lot of common ground between artists and scientists—attention to the details of the physical world, and also love of big ideas and big questions. But what are the challenges? Are there things that make it hard to talk to each other?

NS: I think for a lot of people the connections between the practices and inquiries of art and science are hard to make, and even the few connections that may seem quick and easy on the surface are not in practice.

I’ve now been doing some form of work that interacts with the sciences for fifteen years and what keeps coming home to me is how cyclical the process is: First you find a connection, push as far as you can until it breaks. Then you get dumbfounded when nothing seems to fit, work, or connect anymore. Finally, just when you’re about to lose hope, the connection between the two reforms and refigures in some amazing new way.

It’s a bit like working a Rubik’s cube—you’ve got to be willing to make a meaningful mess out of things in order to get to a better place.

Concretely, the language and cultural values of the two fields are pretty different. The solitary studio pursuit and the communal life of the lab are intriguing and informatively different. It also takes a tremendous amount of experience and patience to understand rigor in the context of each field and to be able to detect and pursue it. Even funding creates challenging imbalances, as funding for the sciences is at an order of magnitude higher than it is at for art. There’s much more of course, but I’ll stop there.

Image: Tonsor has written that it was his “devotion to mystery and the sacred in life” that led him into science in the first place. Did you and he talk about faith much? Did that inform your connection?

NS: Perhaps it did subconsciously, as there was a Native American teaching poem on the front page of his lab website that told me this was a person who could think about his work in a broader sense. However, the overt faith dialogue developed much later in the four years that we’ve worked together.

Faith had always been a part of my thinking when it came to working amid the concerns of art and science. My earliest in-depth conversations with scientists had been with people whose faith drove them to their work, and whom I had met in faith communities.

Faith was the basis of our interaction that preceded any discussion of our lines of work and inquiry into the world. Faith served as a home base we could always return to when we got lost in the tangles between and in our fields.

With Steve, our dialogue started from the other end—beginning with the distinctive qualities of our work and the cultures of our fields, and converging on faith. It took us perhaps two years or more to find a language to connect on the notions of faith and spirituality, as our paths to the life of faith evolved through very different kinds of experience, leaving in behind different sets of loaded and meaningful words and images.

In many ways our process of learning to talk about faith with one another had many of the same qualities as our learning to speak across disciplines.

Natalie Settles has exhibited nationally and internationally since 1999. Her work intermingles the histories, inquiries, and forms of art and science and has lead to collaborative projects with researchers in biochemistry, botany, physiology, and developmental and evolutionary biologies. Settles was a 2008 Wisconsin Arts Board Fellow. Her wall drawing environment entitled “Ornament and Architecture” was featured in the 2011 Pittsburgh Biennial. In 2012 she served as Assistant Curator and essayist for The Andy Warhol Museum's Factory Direct exhibition of artist-industry collaborations, and from 2011 to 2014, she was Artist in Residence with the Tonsor Laboratory for Plant Evolutionary Genetics at the University of Pittsburgh. Settles continues her collaborative work with evolutionary biologist Stephen Tonsor and other biologists and technologists on a digitally evolving cast-light "wallpaper" that is both a work of art and a system of scientific experimentation. She is based in Pittsburgh, Pennsylvania, and you can visit her website here.