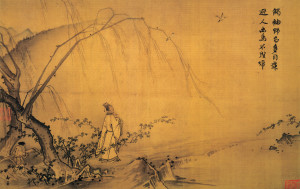 In his essay “The Wounded Word,” French philosopher-poet Jean-Louis Chrétien describes prayer as situated in “an act of presence to the invisible.” People who pray are disclosed to God and, secondarily, themselves, illuminated with a “light from elsewhere.” I was six when I first experienced this in its full measure.

We squirmed in the benches. The grass outside was positively shining; a second teacher blocked the door to keep us from running out to play in it. Fans spun overhead, not dissipating the heat so much as mixing us into it.

Finally we were released. My peers ran and played.

I, on the other hand, received a call from the Lord. It didn’t come down from the sky with thunder. Instead, I remember a quietly emerging sense of destiny. When our keepers called for us to reconvene in the classroom, I wandered towards a path my father had shown me earlier. It led into the woods.

“This act of presence,” Chrétien goes on, puts the praying person “thoroughly at stake, in all dimensions of his being. It exposes him in every sense of the word expose and with nothing held back.” As the ability to pray at all is a sheer gift from without, so the praying person is given in the act of prayer—both to the object of address, and to himself.

I walked into the woods, sure that I was about to meet the Lord. Clouds came and went overhead. A brilliant light came down in broken and shifting columns that irradiated plants and tree trunks.

Before reaching the beach, I stopped by a vacant pool and prayed. What did I ask of the Lord? That he would give me the gifts he had given the prophets of the Old Testament.

Fire did not descend, and I heard no still, small voice, but soon enough I perceived a calm over me and everything else on the earth. I had become hip to the world’s swaddling in divine love. Glory!

The gift I sought was given, I knew; I needed only to accept it.

To the beach, then. I wanted confirmation. In search of a tangible way to exercise the faith by which I would someday work miracles, I took off my sandals and walked onto the wet part of the shore.

The use of the voice in prayer involves the body, which makes possible the absolute gift: that “all can be sacrificed at once, without division or restriction.”

“Okay, now stop!” I thrust my hands over approaching waves. I varied the exercise in order to produce more satisfactory outcomes; I noted that four out of the previous seven waves had stopped their ascent towards my feet when I told them to, and felt as though I had achieved some facility with my God-given power. “I want to be like Moses,” I said to the sky, “I want to be like Elijah!”

Patience, patience, I counseled myself. I slowed my thoughts, began to consciously appreciate the splendors of creation: the gulls, the beached fish, the toddlers playing with their mom.

Could the Lord intend me to plant the seed of faith in these young minds? I observed their games on the beach with consummate magnanimity while making a slow, measured approach. Oh, you want to bury me in sand? Bury me. I delight in your burying.

Up to my neck, I deigned to remain interred while the children played. The waves broke gently in front of us; I felt the cool grit of my earthen body cast and smiled. God was with me. God was with us all. I noticed the sun was getting low.

Prayer, Chrétien says, is “real, like all that is implied in the encounter, only in the impossible. The agonic dimension is nothing other than the ordeal of transcendence.”

The struggle for truth and for God in prayer is an ordeal—a “theophany,” a passion for God. In this, prayer loses “any ability to measure itself and know itself completely.”

Instead of going back through the woods, I decided to take the road that led back to camp. On the road I met one of my teachers on her way home from dinner.

“I was just praying.”

She walked with me back towards camp, listening as I related my experiences.

When he saw us, my father ran and took me in his arms.

“I was talking with God, asking him to make me a prophet.”

We went to the cabin where my whole family was staying. My mother was crying. My father started crying. My sister and brother were crying. I had been missing for hours. Search parties had been formed.

My mother embraced me tightly; her face was wet and hot.

Didn’t you know I would be in my father’s house? I wanted to say.

Prayer ultimately gathers the praying person into itself, appropriates him or her through words that originate elsewhere. In prayer as in all speech, a chorus of voices exists in each single voice: I speak with phrases of my father, inflections of my mother, the intonations of my siblings.

Joining the silent chorus, I give voice to prayers of ecstasy and praise, prayers that contain the greatest hopes and questions and agonies of life—and also, perhaps, a prayer of thanks for a lost child found, safe, twenty years in the past.

He was unaware of his presumption. I wish I were still unaware.

Martyn Wendell Jones received his B.A. from Wheaton College and his M.A. from the Katholieke Universiteit Leuven. He lives with his wife in Toronto, Ontario.

The above Creative Commons Image entitled "Walking on a Mountain Path in Spring" is attributed to Google Images.