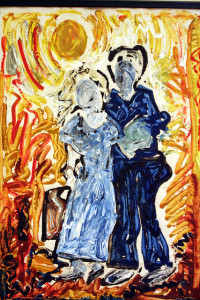 The summer after my freshman year in college, I made the mistake of signing a lease without noticing that the place had no air conditioning. The lease was for a bedroom in an informal boardinghouse set up by the widowed owner of a large, falling-apart, turn-of-the-century house in Uptown New Orleans. (But of course!, you ’re  thinking, she is making this up for literary effect!)

If only I were making this up for literary effect.

I signed the lease because I was determined to live on my own that summer, and with my minimum wage job, I was sure that I could Do This Myself.

The landlady answered the phone, “Praise the Lord, it’s a beautiful day!” She slept on a sofa in the dining room with a shotgun next to her. Her oddly laconic, slightly creepy adult son didn’t live there, but often lurked in the yard.

But it was the lack of air conditioning that was really the problem. I didn’t realize that there wasn’t any until the day I moved in, and my bedroom’s giant windows—which were hung with ancient tulle sheers that once had been white, but which had grayed to the color of insect wings—had to be left perpetually open.

Daily afternoon rainstorms left the room boggy and damp. Flying cockroaches sometimes got in. Each night I took an ice-cold bath, then lay on top of my sheets with a dusty old box fan on a folding chair pointed directly at me.

I think I would rather go through natural childbirth again rather than endure that.

I’ve been thinking about that summer a lot the past couple of weeks because the question of women and air-conditioned office buildings has been big in the news around me lately. As far as I can ascertain, this little boomlet in coverage started with Kate Murphy’s July 4 article in the New York Times’ “Sunday Review.” “Enduring Summer’s Deep Freeze,” which attempted to analyze the need for outerwear in frigid offices during the summer months.

I got onto the trail upon reading Daniel Engber’s riposte in the July 8 Slate, “Hot and Bothered: Air Conditioning Isn’t Bad for You or Even (Relatively) for the Planet.”

Responding to the Times article, Engber stated, “The article’s premise will be familiar to certain members of the paper’s demographic, for whom it’s self-evident that window units are not so much a source of comfort as a sign of gross indulgence. These people love to hate AC, and they drive me nuts.”

Then Petula Dvorak’s July 23 Washington Post Metro section article “Freezing Women, Oblivious Men: An Air Conditioning Investigation” really hit the fan, as it were, with its focus on how cold women get in office buildings. A follow-up by Dvorak examined the complaint of some really clueless folks that “overweight, menopausal women” are the reason for the frigid temperatures in offices—not suits and ties. That then led to multiple reports on NPR, including “New Study Says Chilly Offices Hurt Women Workers’ Productivity, Health.”

Maybe this is just because I once lived in Houston, but I am here to say that I have never, not once, been too cold in an office building. Or on the off chance that I was, I just put on a sweater and thought nothing about it.

I sometimes play a game with myself—which of the world’s greatest cultural treasures would be worth getting rid of if it meant you could not have air conditioning. I am an ardent (if screwed up) Christian, and I have taught classical literature, and I would still be willing to get rid of the Sistine Chapel.

Petula Dvorak ought not to dismiss the weight and menopause theory too quickly, in my view: My take on the air conditioning brouhaha is that too many women with power in Washington, D.C., (i.e., the kind of women who would be quoted in the Post) are just too tiny—little size-two girls (although they are more like fifty-eight) in $800 suits, with $600 shoes.

It’s like that old joke about rich women in New York City: “The smaller the dress size, the bigger the apartment.” Tiny, tiny, tiny women.

I am not one of those tiny, tiny women. I have breasts that swelled permanently to a C-cup from twenty-four months of breastfeeding two children, and hips with a breadth that could inspire a song by the Ohio Players. I am not that odd: Actually, to quote Lena Dunham, I could be “thin for Detroit.” I can make a trip to just about any Walmart and feel quite svelte.

But I ain’t thin. And I am in my mid, soon-to-be-late forties. And I tell you this: I love it cold. I love going on business trips and cranking the air conditioning down to, oh, sixty-eight degrees. Just put on an extra blanket.

I did, however, manage to marry the Most Wonderful Man in the World who, like my deceased father who lived through the Depression, is focused on saving money and wants to keep the thermostat on eighty.

This is a problem. I crank it down to seventy-seven (Seventy-seven! We’re not talking about seventy!), and then come back and hour or so later and he has nudged it up again. The other night there was the slightest breeze in advance of forecasted rain, and he got excited, turned off the air, and opened all the windows.

An hour later, I got up and turned it back on. Because it was TOO FRIGGING HOT.

Engbar’s Slate essay on how air conditioning is really not so environmentally bad notwithstanding, I suppose we might—as a consequence of such selfish energy hogs as myself—end up having a resource-poor future in which only the one-percent have air conditioning. It’s the kind of apocalyptic gloom that has been conjured by the wealth of dystopian novels and films that have appeared over the last few years.

Not being one of the one-percent, I suppose I will be right at the heart of the air- condition-less eschaton.

Guess what? I’ve done it before and can do it again.

The above royalty free image is attributed to .shyam. on Flickr.