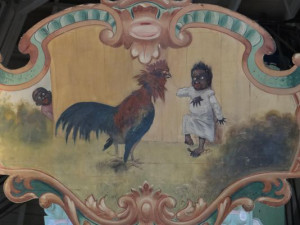 Underlying what’s wrong with this picture is where it resides. Not in a museum of racist caricatures. No, it’s on the popular Dentzel Carousel at Ontario Beach Park in my city: Rochester, New York.

The carousel is a special treasure. Built in 1905, it’s now one of only fourteen operating antique menagerie carousels in the United States; it’s also one of only a few that remain in their original location.

Dentzel Carousels, created by the Philadelphia firm G.A. Dentzel, were famed for their delightful range of animals to ride. Our city’s carousel offers not only the usual horses, but also cats, ostriches, pigs, rabbits, plus a deer, a giraffe, a goat, a lion, and a tiger.

When my granddaughters were young, I took them to ride the carousel. They had fun choosing which animal to climb upon. Did they notice the cartoon-style pickaninnies painted on one of a circle of panels topping the carousel?

Maybe not. Maybe so. Who knows what images a child absorbs unconsciously? And if that child is African-American?

So, what’s wrong with this picture?

Following the controversy in South Carolina over removing the Confederate Flag from the State House grounds, an editorialist in my local paper called attention to this pickaninny image on our beloved carousel:

On one of the top panels of the carousel there’s a picture depicting two black children and a rooster. These type of characters, often referred to as “pickaninnies,”are a racist depiction meant to dehumanize and stereotype black children. In a very very bad way. Many of these types of images are shown with black children in suggestive poses or being eaten by animals, targets of violence, frightened or maimed and killed. They’re meant to be racist, they’re meant to be unkind.

In our carousel’s image, the two cartoonish black children are depicted as terrified by a rooster.

Almost immediately after this editorial appeared, local groups of blacks and whites alike were calling on the County, which operates the park, to take down this offensive image. This began a messy process, complicated by the fact that the carousel is a National Historic Landmark.

County officials messed up the process even more by their response. At first they announced favoring community dialogue on the topic. Then, suddenly, a decision came down from the County that the pickaninny image would stay in place, but a plaque explaining its original cultural context would be hung on the wall of the structure housing the carousel.

The “take-it-down” groups were not satisfied by this response. They called for a rally at the carousel the following Sunday afternoon. My husband and I joined the rally.

As much as I’d thought I was sensitive to racism, I learned more from the many eloquent, impassioned speakers at the rally.

“I once brought my grandchildren to ride this carousel,” a black woman said tearfully; “but when I noticed this image, I thought no, I can’t ever bring them back. How can I expose them to this demeaning image of themselves?”

I heard more of what’s wrong with this picture.

One speaker recalled the children’s book Little Black Sambo, first published in 1899, which depicted the child Sambo in the same way as the carousel panel’s children: bulging eyes, big red lips, kinky black hair standing straight up. Around the mid-twentieth century, people started saying “this is wrong, because it demeans a whole class of people”; gradually the book was banned from schools and libraries across the U.S.

Nearby the rally stood a handful of people disapproving of the protesters’ sense of what’s wrong with this picture. “It’s just history,” they said. “You can’t erase history.”

But one of our speakers, a white woman, identified herself as a teacher and said: “If there were a swastika on this carousel, it would long ago have been removed in deference to the sensibilities of the Jewish community. Or if one of the panels was a Playboy bunny, it would certainly have been taken down by now because it was demeaning to women, turning them into mere sex objects.”

A letter to the editor in the local paper a couple days later added another analogy to explain what’s wrong with the pickaninny panel:

I’m sure we are all familiar with the offensive way the Irish were depicted in cartoons and drawings during the 19th century. Suppose a carousel designer of that era thought it would be amusing to have a panel showing a couple of filthy children playing in the mud while their obviously immigrant Irish father was passed out on the porch steps holding a whiskey flask. And suppose also that such a panel was actually installed and remained there, unremarked upon until the summer of 2015. And suppose the community decided that the best way to handle it was to leave it in place but install a plaque talking about the anti-Irish prejudice that prevailed in those years. Would that satisfy our neighbors who were rightfully proud of their Irish heritage?

So the public discussion continues, despite the county government’s attempt to stifle it. Though some people shrug that the panel should remain because “it’s just folk art,” many more are convinced that retaining offensively racist folk art in a place of entertainment for children is just plain wrong.

Peggy Rosenthal is director of Poetry Retreats and writes widely on poetry as a spiritual resource. Her books include Praying through Poetry: Hope for Violent Times(Franciscan Media), and The Poets’ Jesus (Oxford). See Amazon for full list. She also teaches an online course, “Poetry as a Spiritual Practice,” through Image’s Glen Online program.

The above image depicts the referenced carousal panel and belongs to Peggy Rosenthal.