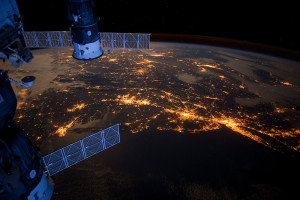 Though I’ve heard it said otherwise, the Great Wall of China is not the only evidence of human artifice visible to inhabitants of the International Space Station. Among the more prominent is Lake Powell, the now drought-shrunken reservoir behind the Glen Canyon Dam on the Colorado River. The dam—an impressive feat of engineering—required a tradeoff: electricity to chill and illuminate buildings in Phoenix and Las Vegas in exchange for flooding a beautiful landscape upstream and disturbing the ecosystem of the Grand Canyon downstream.

Parts of some national borders are visible from space, where one country—typically the poorer—has denuded its forests or otherwise severely degraded its land. The most obvious evidence of human activity, however, shines from earth’s nighttime hemisphere, where blobs of light radiate from cities like metastases from a tumor.

These are among the reasons some scientists now refer to the current epoch in the earth’s history as the Anthropocene, from two Greek roots meaning “human” and “new.” What’s new about it is the effect humans now have on the planet: an unprecedented and unhealthy pattern of change in biodiversity, regional chemistry, and global climate.

In 1967, decades before the word Anthropocene was first used in its current context, Lynn White, Jr., a historian, suggested that the real origin of the global ecological crisis was Christianity, which in its medieval form interpreted the injunction in Genesis 1:28, “fill the earth and subdue it” as divine authority to rape the planet.

For most historians and biblical scholars, White’s thesis has since died the death of a thousand qualifications, but some still find it attractive for its simplicity and clear assignment of blame.

For all the details and nuances White got wrong, his argument was subtler than even some supporters give him credit. He didn’t think ditching Christianity for “Science” was the answer. He argued instead for a transformed relationship between humans and nature, one that limited human power so that it was no longer exploitive. He even proposed St. Francis of Assisi as the model and patron of this new ecology.

How interesting, then, that the man who took St. Francis’s name when elected pope writes so forcefully on the urgent task of transforming humanity’s relationship with all creation. Like St. Francis, the pope links care of the nonhuman world with that of marginalized and impoverished humans. His insights draw from the deep Christian tradition, textured with knowledge from the sciences and hard-won wisdom from human experience.

The pope’s recent encyclical is titled Laudato Si’ (“Praised be”),words taken from St. Francis’s thirteenth-century hymn in praise of God through, for, and by the wonders of the created world: Sun, Moon, and Earth, those who forgive, those who make peace—even “sister bodily death.” It’s a large and generous vision.

St. Francis couldn’t have known about biological evolution. Pope Francis does, and presents the Christian doctrine of creation in harmony with evolutionary theory. Both Francises share an understanding, consonant with evolution, that for all the traits that make humans special, they are nevertheless part of—and in no way separate from—the totality of creation.

When we speak of the “environment,” what we really mean is a relationship existing between nature and the society which lives in it. Nature cannot be regarded as something separate from ourselves or as a mere setting in which we live. We are part of nature, included in it and thus in constant interaction with it.

He later underscores this deep unity:

If the present ecological crisis is one small sign of the ethical, cultural, and spiritual crisis of modernity, we cannot presume to heal our relationship with nature and the environment without healing all fundamental relationships.

It seems that human intelligence, that inexplicable product of a brain that evolved over millennia, must relearn its small place in a large and populous creation.

It may help to remember that the words “ecology” and “ecumenical” share a Greek root, meaning “household.” Pope Francis’s ecology of creation emphasizes broad consultation and carefully limited human stewardship, not the modern ideology that science and technology give some—but rarely all—humans the power and right to direct the planetary future.

Rather than pontificating from the Vatican, the pope quotes the Orthodox Ecumenical Patriarch, regional bishop’s conferences, and Sufi mystics. He consults the ecological sciences. He repeatedly advocates an increased respect for and engagement with the earthy wisdom of indigenous peoples.

There are those who disagree with the pope’s message, dismissing him as a naive meddler in matters beyond his competence. Some of the better-reasoned counterarguments, such as those of David Brooks or Damon Linker, emphasize the benefits—especially to the poor—of modern technology and consumer capitalism. They advocate tweaking current systems rather than radically transforming relationships and limiting human power.

Linker, for example, says the control of nature envisioned by early modern giants like Machiavelli, Bacon, Hobbes, and Locke will resolve the current ecological crisis and that it’s precisely the pope’s “kind of well-meaning wishful thinking that provoked the modern project in the first place.”

I think Linker is wrong, though I hope he’s right, if only because a series of tweaks to the current system seems far more likely than the global transformation the pope calls for in Laudato Si’. Humans rarely change if they can avoid it, and change reluctantly even when there’s no other choice.

Yet humans are visibly changing the world, and not necessarily for the better. Perhaps the current way of doing things is both sustainable and sufficiently adaptable to grow despite unintended global damage. I doubt it. Adaptation and growth are key to evolution, but so are limits, interdependence, and bodily death.

I, for one, hope to embody the difficult and humbling transformation Pope Francis calls for. It’s still too beautiful a world not to try.