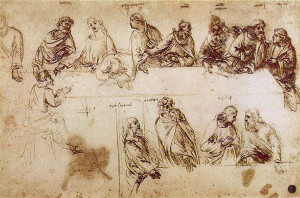 The much-beloved poet and teacher Brett Foster passed away earlier this week and so I’d like to dedicate “Poetry Friday” to his memory. Image published quite a few of Brett’s poems and the one I’ve chosen to talk about is “Mixed Company.” I chose it because while many of Brett’s poems exemplify an elegant formalism (in part deriving from his deep knowledge of Renaissance literature), this one shows him to be in a more informal, colloquial mood. With its short lines and dramatic soliloquy form, “Mixed Company” offers a vivid glimpse into the second chapter of the gospel of Mark. Like those medieval or Renaissance paintings that placed biblical stories in contemporary settings, this poem begins by talking about a coffee shop. There’s some fun as Brett plays with the meaning of the poem’s title (and don’t you just love “the ‘meh’ of our behaviors / or consistent confusions”?). Having disoriented us with the coffee shop reference, Brett suckers us in to the perspective of one of the disciples, who is grateful for the way Jesus accepts him (and his fellow “sinners”). The speaker realizes that something Jesus has told them might be considered insulting, but instead he finds it liberating. In Brett’s deft handling, simple language gains unexpected resonance and power: “I found / myself happy to be allowed /
to stay there.” I believe Brett did find a place to “stay” on this earth and I trust that he’s found it even more truly now.

Meaning, not the fey name
of a coffee shop cheekily named,
but me and the sinners
(not “mixed” as in unlike things
commingling, but rather
the “meh” of our behaviors
or consistent confusions,
contradictions like breaking
news ongoing, over and over
with little new to report…)
as I was saying, me and sinners
and tax collectors, resorting
to the healer’s home most nights
since Levi from the tollbooth
introduced us all. That one night
he delicately explained how lately
the holier-than-thous
who police our community
were increasingly complaining
of our all hanging out.
We half expected to be gently
asked to leave at that point.
I mean, I think we would
have mainly understood it.
You’ll appreciate with me, then,
how surprised and pleased
we felt that this wasn’t
the case or the result
of his telling us this, not
at all. “It’s sick people who need
a doctor, not healthy ones,”
he said, smiling. Thinking
of it now, it’s sort of insulting,
but that’s not how we heard it.
They were comforting
words instead, and I found
myself happy to be allowed
to stay there, just nodding,
nodding vigorously,
at the sound of those words.