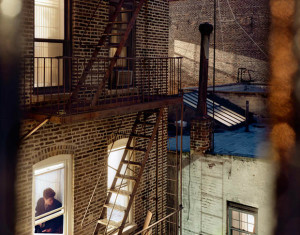 When I moved into this apartment with my wife after gaining Canadian immigration clearance, I noticed, standing on our balcony, two apartments in the public housing building across from us.

The first apartment, near the center of the building and four stories below us, was always visible at a sharp angle from above, and inside it I always saw someone I came to refer to as the Sad Man. He’s there now—I just checked—lying in black clothes on top of the sheets on his bed, presumably looking at a television mounted across from him and obscured by the outer wall.

The Sad Man is very old, and every time I look into his apartment he’s lying there, or just getting up, or just lying back down. I’ve never seen anyone in his apartment with him.

Two floors above the Sad Man’s apartment and one unit to the right is his spiritual twin, the Sad Woman, into whose apartment I have a deeper sightline on account of the shallower angle.

The Sad Woman keeps her blinds closed more often than the Sad Man, but sometimes she draws them and lies in a blue robe on top of the sheets on her bed, looking out the window. My eyes are bad: I can’t tell if she and I have ever made eye contact. But I have seen her there all the same, sometimes lying there at the same moment as the Sad Man, the two of them demonstrating their tiredness and resignation in tandem without being able to know that the other exists.

At least, this is how things were up until about a week ago. I went out to pick up a pizza on a Friday night, and on my way I noticed an Ontario policeman in the lobby of the public housing building trying to maneuver a gurney through a door. The gurney did not have sheets. On top of it sat a bare, thin mattress, and on top of the mattress, a gurney-length red bag with a zipper running up the middle.

Days later I noticed through partially drawn blinds a couple of men cleaning the Sad Woman’s apartment; soon after, through open blinds, painters. Now the blinds appear to be gone completely and the apartment is fully visible to me through the window: every white wall, every bare counter, and almost every tile set in the empty floor.

When I was young and within view of a department store, I’d wonder why people on different floors could not communicate with one another, since they were so plainly visible to me. If crowds can form horizontally, what’s to prevent them from forming vertically as well? The floor, of course. I suppose in my naïveté I imagined there to be something in the human spirit capable of overcoming a barrier as simple as a floor.

Today, something still bothers me about the fact that the man four stories down remains unaware of the passing of the woman who lived in the unit two floors above his. From my vantage point, they were practically an embodiment of entanglement theory, performing the same actions of life at a distance with a synchronicity that I found downright eerie.

But of course, this synchronicity is not a unique possession of two isolated public housing tenants. It is familiar to me, recognizable from my having watched elderly relatives keep time in the twilight of life with their own routines and expressions of fading agency.

I find death to be unthinkable; in this I am squarely in the ideological mainstream. “White Americans do not believe in death,” James Baldwin writes in The Fire Next Time, “and this is why the darkness of my skin so intimidates them.” This denial assumes many forms. Baldwin again: “[W]e will imprison ourselves in totems,…steeples, mosques, races, armies, flags, nations, in order to deny the fact of death, which is the only fact we have.”

Even now, standing up to look across the way into the empty apartment that used to house the Sad Woman, I can’t understand the reality of her absence. What is there to understand, I suppose? She was there, and now she is gone. Or maybe that’s just an expression of my failure to grapple with that inescapable fact of death, as real as the indention left in a nicely made bed by the body of a person who doesn’t want to un-tuck the sheets.

I still wonder when I see the glassy walls of a department store. What if a person on the third floor looked up and said a simple greeting to someone on the fourth? What if I saw the exchange? What if the Sad Man had offered the Sad Woman a word of comfort in her last days?

I am chasing an ugly kind of security here. I want these connections to exist because I want the system of interlocking purposes and mutual regard that I impose on the world to correspond to underlying spiritual realities. Honesty and courage require judging this imposition by what I know of spiritual realities, if I know anything about them at all.

What I know of spiritual realities comes to me by way of my faith, and that faith weaves the fact of death into its liturgies and creeds. It’s built upon the death of God himself. We are invited to join in this death, in preparation for our own deaths, at which point we are ushered into the life everlasting—a life that partakes of eternity, thereby bending my notion of life beyond recognition.

I look across the way; I read Ecclesiastes; I take my medicine. I recall that finitude is blessed. I recall that in French, the words “to bless” and “to wound” are similarly pronounced. I step outside and look down at the Sad Man. Today it seems to me that he is asleep.

Martyn Wendell Jones received his B.A. from Wheaton College and his M.A. from the Katholieke Universiteit Leuven. He lives with his wife in Toronto, Ontario.