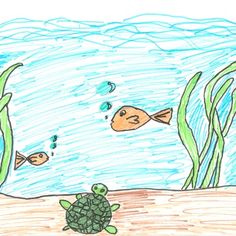 I spent much of this past summer watching my friend’s three-year-old girl, Mia, as my friend prepared for the birth of her son. I’d met Mia last year in Boston before her family had all moved back home to Beijing. Now, Mia was in Minnesota, living in an old Saint Paul house where she could watch birds and bunnies from the porch.

The first time I visited, Mia yelled at me and her mom because we were speaking English and she couldn’t understand us. So we agreed that Mia would teach me Chinese and I’d teach her English. We drew sea creatures together and learned their names. When I said something in English that Mia found odd, she yelled the Chinese version of it back to me, putting the long diphthongal vowels of the upper Midwest into the word and then collapsing in giggles.

I don’t understand children very well and am a little scared of them. When Mia moved to the US, I thought of her as something helpless to be carried along by her mom, as if the new culture and the buzz of a befuddling language wouldn’t bother her at all.

Early after she and her mom moved in, Mia started positioning her toys on the floor in ways that were meaningful to her. Sometimes, she told her mom to stand in one position until it was okay to move. Once, Mia and I were making up stories about the octopi and crabs we’d drawn when her mom moved a book Mia had placed on the floor, and Mia screamed and sobbed for an hour.

Of course, this all sounds a bit odd and troubled, because it is, but to me, it was also pretty familiar. A touch of obsessive compulsion is a necessary part of brain development as children form emotional cause-and-effect associations between disparate things.

But I remember doing this when scared, when my mom was getting sicker and my family was changing and self-destructing: placing objects on my dresser in eastward-facing positions, doing things a certain number of times before I could stop. It wasn’t a bribe or a ritual; it felt more like a responsibility I was born with and had to fulfill.

Mia was soaking wet after the tantrum, and when she could finally speak, she said she’d screamed because she couldn’t find the words to say what she wanted to say.

A dance instructor once told me that sometimes in a movement, something in the body will scream or draw attention to itself. When this happens, she said, look for the quiet thing behind the loud thing; look for what’s trying to be invisible, and you’ll find your problem, your real hurt.

So many things happened to my family this past summer and fall, things I can’t control or talk about, other than to say that it feels like I’ve been dragging my heart around behind me. I want to pray, but prayer feels like throwing up, so I’m trying to find new ways to pray. The classic helphelphelphelp is reliable, and lately, I love repeating “I have poured out my soul above myself” from St. Augustine’s exposition on Psalm 42.

It’s easy to underestimate kids. Three years is not a long time to be on the planet, and there’s a particular beauty and horror to this newness. Everything’s a surprise, and every surprise is a little incomprehensible. When you don’t understand something, it’s easy to grow confused or scared; when you grow confused or scared, it’s tempting to want to own the fearful thing.

Mia’s very aware of what is hers, and she monitors her flock at all times. When I’m with her, I’m Nata-ayi (Aunt Nata), and if I stray out of her vision, I can expect to hear her counting her people and yelling for the missing one.

The things children love are so simple: the lilt of a word repeated over and over, a color, cut paper, a stuffed animal thrown back and forth. It’s easy (at least for me) to think that because of their simple loves, children are stupid or boring. But the things they love are so full of meaning, almost unbearably full. I think a lot of the time they love because they’re so full of the responsibility of salvation, the burden of making sure the world doesn’t end on their watch.

I don’t know where this sense comes from or if it’s universal. I know I had it (and probably still do, in that sense of unexplained dread that creeps up more than occasionally), and Mia has it. Horror movies seem to rely on it: the kid being the only one to know the monster is there, needing to save her family while never being quite able to express what’s wrong.

Mia and her family went back to Beijing a few weeks ago. I found out on the last week she was here that all the Chinese words she’d taught me were made up—words that relied on Mandarin sounds but had no meaning other than what she’d given them. It’s a language spoken by only two people in the world.

I love that she did this: countered her lack of understanding not by learning or teaching, but by inventing something that reflected what we needed to draw, play with our food, and look at neighborhood dogs together.

I’ve started to think of prayer this way, as a language I have to make up. I love words, and I know language can help us suffer responsibility, even when that responsibility is inflated or false or comes in the guise of a dragged-around heart. I like that prayer is navigation, that it always feels both difficult and childlike, that it’s a way of sharing some responsibility for pretending to save the world.