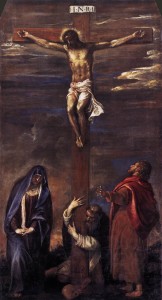 If God is love, as we’re told, then what kind of love is he? In the quest to know that which is beyond all knowing—another one of those oxymorons so characteristic of religion—we find a set of pictures that for any serious adult proves ultimately unsatisfying.

Brotherly love, fatherly love, even passionate love have all been employed to express God’s essence through platitudes and poetry, paintings and precepts. God with his hand on our shoulders; God carrying us in his arms; God pining away below our windows, vexing tarts that we are. Speaking for myself, these images long ago began to cloy. To the limited extent that they can voice the truth about the transcendent, any effect they take is all worn out. The fuzz is off the velvet.

And yet, there is one image that does not lose its appeal—that beckons the beholder further in rather than tires him with what only settles and sates. One image is always fresh, with the power of pulsing blood, of throbbing lesion; and therein seems to lie the answer to what kind of love God is.

The crucifix must surely be the strangest of all religious symbols. No matter how many cultural anthropologists strain to find parallels between Jesus and Apollo, or Dionysus, or Orpheus, or any of the other likely lads who “fade in the fall, rise in the spring,” the symbol of the tortured God—God stretched upon a rack, transfixed upon it, and left there to bleed his life out by the creatures he has made—is unique.

Even the closest myths are distanced by the teleological purpose of the crucifixion; after all, it’s not just crops that grow again in the wake of this deicide; it’s not just a matter of better grapes and a higher stand of corn. In the crucifix, the murderer is reborn in the act of a God who has deigned to die at his hands, and more importantly, in his place.

Sure, the Aztec gods wanted their sacrifices, and the faithful ripped the beating hearts out of captured prisoners as an offering of appeasement; the Celts slit the throats of an assorted lot and sank them in their bogs to get what they needed, and the Chinese were wont to entomb a goodly number of servants as part of a great man’s burial ceremony. Hardly a culture known to us, from pole to pole, is unblemished by this history.

Scapegoats are a part of even the crudest, most primitive forms of religion. The impulse is practically instinctual. Find someone willing or unwilling, saddle him up with your sins, and then send him over the precipice, burn him on a pyre, or gut him on a rock. It’s supposed to provide you with a clean slate.

But in all of those instances, the substitution is offered to the deity by the transgressor, and the roles are clear and distinct. In the crucifix, the deity takes two of the roles in the triad. In every other case, there is a difference between the payer and the payee; in the crucifix, God is both bank and borrower, lender and debtor.

This comports with what we know of love in its highest expression and purest form—sacrificial love. The love that wins the life of the beloved at the cost of the lover’s life is qualitatively different. It is the unparalleled example of what the word means. When we hear tales of it, rather than respond with hearts all aflutter and cheeks all aglow, we stand wide-eyed and sober, even somewhat frightened by the awesomeness of a soldier who throws himself on a grenade to save his fellows, of a mother who rushes into a burning house to save her child.

The more cynical like to say that such acts can be put down to some instinctive need to preserve one’s gene pool, but why do people do it to save those with whom they share no DNA? Why do strangers save strangers? Even more perverse, why would a victim volunteer himself for a martyrdom deserved by the very one who effectuates that martyrdom? Only love can explain it.

And to push the point as far as it can be pushed: If the ontology of love is sacrifice, and if God is love, then God is sacrificial love, and always has been. Not just at the point when the Second Person of the Trinity entered time and allowed the ransoming to occur on a craggy hill outside Jerusalem in the first century, but before there ever was a time. Beyond all beginning, there was a wound; beyond all endings to come, it will remain.

Further yet, if our being is contingent, in that we constantly receive our essence and existence from the source of being—and if that being is sacrificial love—then what enables us, what sustains us, is a stream of the archetypal selflessness depicted upon the crucifix. In seeking God’s face, we are shown his wounds, their cost and purpose.

Who is God? The one who has bled, is the answer; the one who bleeds now, and will forevermore.