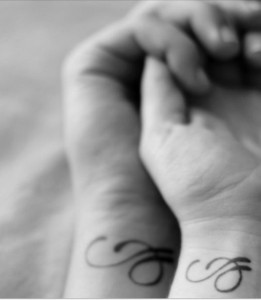 If Katie had had a tattoo when we met, I probably would have married her thinking it quirky or even, perhaps, kind of cool. But when we married her only unusual body mod was a tasteful nose ring.

Fast forward twenty years. Out of the blue she says to me: “I want a tattoo.”

My first response was not, “Oh, that would be quirky and even, perhaps, kind of cool,” but something more like, “What, aren’t you happy in our marriage?”

The response in my head, at any rate. Out loud, I did what I usually do when I’m uncomfortable: grunted noncommittally and changed the subject.

My reaction surprised me. When I thought about it, I didn’t have moral objections, and I wasn’t convinced myself by the social objections. Why was I so uncomfortable?

Working out the answer took me on an unexpected psycho-spiritual and theological journey.

I stalled Katie initially with aesthetic objections. We can’t agree on where to hang pictures or what color towels to buy, so I had concerns about the design. If we don’t like our towels, we can buy new ones; if I didn’t like the tat, I’d have to see it every time she changed her clothes or we went swimming or made love.

It was more difficult for me to describe my discomfort with how eager she was to permanently change her body. For me that marked a social and emotional boundary with profound marital implications. I had a vague vision, crazy as it sounds, of rows of people standing on display, and some were plain, naked bodies and some were stamped with ink.

And in the vision my wife and I were not in the same camp.

Friends weren’t always helpful. It surprised me, in fact, when some of them said, “It’s her body, why do you care?” I thought, “That’s precisely why I care. Our bodies belong to each other; that’s biblical, friend.”

I knew what they meant, of course, but, PC or not, we believe the love we’ve found in marriage has given us each a deep, intimate claim over the other, including the other’s body. To be honest, the anxious part of me did want to exert control, but the loving part of me wanted to be sure I was caring for her and for our relationship.

And here was the crux of the issue: My care for my wife’s body can only be as loving as my theology of the body provides, and my theology, it turned out, had some limitations in this area.

James Smith argues that God’s incarnation as Jesus Christ affirms the persistence of the goodness of Creation pronounced in Genesis. God did not see it a tarnishing of his glory to take on human form. For Smith, this means that it is good for us to have finite, created bodies and even that we should expect to have finite, created bodies in eternity.

I’d been teaching this for years without having had to reckon with it in my own life.

Growing up a late-twentieth century Midwestern evangelical, I imbibed the familiar confusing messages about the body. Most bodily things belonged to our sin nature, but a few things were okay when you met certain conditions. Whereas my peers often rebelled against this confusion by doing all the prohibited things in a baby-and-bathwater rejection of “legalism,” even as an adolescent I recognized the nugget of truth and attempted to discriminate between what was and was not truly acceptable for my body.

But this tattoo situation made me realize that I still too often see my body as some kind of barrier between good and evil. On such a view, a little thing can spoil the idol of purity I’d concocted for myself.

We’re right to desire purity, of course. But the way I’d internalized the concept was not “the Lamb’s blood cleanses me” but “I must guard against the bad like a goalie guards the net.”

Imagine this absolutism developing within an emotionally enmeshing home environment where any difference was registered as the threat of abandonment. It took me until college to really do the separation from my parents thing.

Deep down, then, my reptile brain heard my wife saying, “I want to permanently stain my body and (thus) mark my separation from you.”

I had to appreciate that “getting a tattoo” meant something different to each of us. She was willing to cross the line between those with ink and those without, those who chose to be pierced a thousand times by the needle, who walk around with the visible reminder, and those who refrained, who remained unmarked.

To me it meant experiencing my embodied self as a physical, temporal, permeable reality, someone who made a choice about his body at one point in time that will persist into a future that will unfold one day at a time. Unlike marriage and children, getting a tattoo had no script. It meant going off-book into an unfamiliar narrative.

The decisive moment came as a surprise. Katie changed strategies and suggested we get matching tattoos for our fifteenth anniversary. It was a cunning move because it circumvented my abandonment anxiety and allowed me to confront my incarnational issues alongside her.

I began to imagine my own body as the kind of thing that might be ornamented in such a way that might be good enough to merit its extension in space and time.

That’s where my wife wanted to go, and if she was going to be indelibly marked, then I, as the man who promised to always grow together with her, would do the same—not because I was afraid of losing her, but because I wanted to embrace the adventure of embodiment.