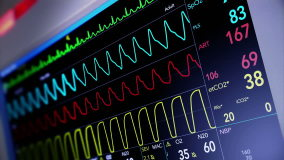 While I was finishing grad school, I worked two jobs, the first at an infectious disease research center and the second spent tabulating data from death records of women who had been killed by partners. It’s amazing how much data is forgotten in the world, how many trends and progressions are hidden in numbers waiting to be grouped and observed.

Students of viruses and bacteria and violence—and the suffering that accompanies them—start to feel split from other people at some point. What I mean is: The population-based study of epidemics, heart failure rates, quality of life-years, and breast cancer complications is aimed at making people grotesque, burdens of risk, carriers of microbes. Dirty, stupid, and contaminated.

As students of public health, our goal was to decrease the burden of disease, lower cancer and heart disease risk, prevent sexually transmitted disease, and always be tabulating causes of death and trying to stop them. But people, with their eating and drinking and loving and hating, with their carbon-based bodies and relentless submission to the physical laws of matter, were always in the way.

There was a joke a lot of the professors told about how the most effective way to stop any virus is to drink a gallon of bleach. It’s funny (and horrible) because it hits us in the place where we’ll always think there’s something intrinsically wrong or broken with us, and because it puts us at a remove: We can pretend we’re all fixable.

I loved analyzing data; I still do. I love the experience of feeling the numbers pile up in me, of the way they stay in my belly week after week, of the easy and distanced compassion it inspires to carry data unattached to story or body.

When I first started my two grad school jobs, I didn’t know that the data would accumulate in me like this, or that I would have to confront two opposing ideas: the idea that mortality and disease mean you failed or did something wrong versus the idea that the beautiful miracle of us is in our fragility.

In the dark bathroom at work, pondering frightening statistics, I’d sit and push my closed eyelids against my knees until I could breathe again. At night, after poring over rural shotgun murder statistics, I’d lie in bed and feel my face shatter over and over, one prolonged flinch, until I fell asleep.

The first time I went to an Ash Wednesday service was during grad school, and I attended a noon service at an on-campus church. There was something of kismet to it: the right thing at the right time, or two signs coinciding to make an epiphany. At the time, all I wanted was the rightness of my own mortality back, how good and right it feels to be imperfect. The fact—smeared with oil on my forehead—that I was nothing but carbon and perfectly okay.

I’ve gone to Ash Wednesday services at the campus church every year for the past eight years now. There’s a mural above the altar that I love to look at: an octagon containing a central cross, and, in each corner, what I’d initially thought were the four elements. Sinuous curlicues representing flame, thicker wavy lines for water, clumped circles as air’s molecules, and wheat the consequence of earth.

I later learned that the mural was a little more esoteric and less elemental. It’s meant to show the Holy Spirit’s descent as dove (not fire), baptismal waters (I got that one right), and the Communion grapes and bread.

I like my interpretation better: the elements at the head of the church. The Greek philosopher Empedocles was the first to identify and define the elements as essential parts of all matter. He also believed that peace was lonely and solitary, that humans started conflict in order to come together, touch, be close to one another. He believed that peace and conflict existed in balance, a time to heal and a time to destroy.

That’s what I love about Ash Wednesday, why I look forward to it. It’s the only day in the year when I don’t have to try to be perfect, when I can be fine the way I am. Can we talk about how disturbing the New Testament miracles sometimes appear, how Lazarus was faced with the horror of dying twice, how no one knows if the blind man missed the soft, aural cocoon of the dark and the muscle memory he used to understand the world?

People, including me, don’t often enjoy being confronted with their mortality. But spend some time with the alternative: not immortality, but a trajectory toward greater organization, perfection, elimination of mutation and clot and infection. There’d be no room for us, no right way of being in the soft bodies we know as home.

I’m not romanticizing injury or death or decay, but I am saying that at the end of every day, we come home to our bodies; we have to fall in love with the broken pieces of ourselves in order to live with ourselves. The real miracle is carbon-based: a line of electricity that lets a heart beat and beat and beat for years and then stop.