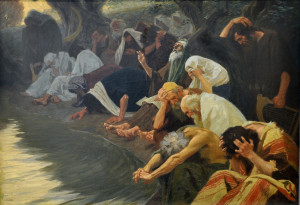 By the Rivers of Babylon by Gebhard Fugel. 1920.

Sarah Arthur: As Poet Laureate of Ohio, in what ways do you see the bardic role of the poet as “lamenter-in-chief” having changed over time? What role do you see a contemporary American poet laureate playing in a time of communal/national grief?

Amit Majmudar: This is an interesting question because of the question it begs: Is a poet laureate, or a poet otherwise in the public eye, obliged to lament on behalf of the nation? This is a culturally determined role, clearly; history has seen cultures in which the poet is meant to exhort to battle or record deeds of military prowess, and in which the poet is supposed to extol the emperor. Yet Virgil is said to have moved Octavia, Augustus’s sister, to faint with grief when he described her beloved son Marcellus, who died young, in the underworld; the great destiny of Rome didn’t quite hit her as hard.

“Lamenter-in-chief” is particularly complicated today. On the one hand, grief or national trauma, as brought to us by the news media, is one of the few things that Americans, otherwise divided by religion and race and culture, actually share. Basically everyone agrees that victims of the latest terrorist attack are tragic; beyond that, one wades immediately into fractious debates, like the one about what to do in response, and the debate concerning whether America itself is ultimately responsible for its own targeting (the chickens-coming-home-to-roost theory).

The idea of a poet actually expressing national or communal grief is more of an idealized one, in my opinion; quite simply, the news cycle works so quickly that it would be truly rare, a sort of felicitous “tipping” phenomenon, if some hastily dashed-off poem were to make the rounds of the internet and twitter in time for it not to seem dated by the next week. And for a large number of newspaper or internet readers to like or understand this hypothetical public elegy, the poem would have to be cast formally in some compromise with prose, and express left-leaning commonplaces in any case.

Dick Allen: World War I changed everything, didn’t it? No more praising the gallantry in Tennyson’s “Charge of the Light Brigade.” Mass trench warfare deaths, machine gun mass slaughter, and, in World War II, the Holocaust and dropping of the bomb on Hiroshima. So the contemporary American state poet laureate, in order to speak publicly for more than himself or herself, has to somehow find a way again to speak of “we” and “us.” Not easy.

Contemporary American poetry in the last half of the twentieth century into the present twenty-first is understandably dominated by the poetry of the individual self. It is also mostly written in free verse rather than traditional rhyme and meter. Regular rhyme and meter would make poetry more public and accessible (i.e., think of songs).

Further, contemporary literary poetry eschews the didactic and sentimental and nostalgic, leaving these to doggerel and greeting card verse. So the serious poet, almost from the start, has learned to avoid being “bardic” or “prophetic” or even a “lamenter.” How dare you speak for us? How dare you try to lay your truths on us? How dare you chide us or try to lead us?

Swimming against this stream, I’ve used an “our” point of view and traditional rhyme and meter in my two main public grieving poems, “And Leave My Human Feelings” and “Solace.” The former was read on public occasions during memorials to the victims of 9/11. The latter poem is a very quiet, small work, alluding to the children killed at Newtown, Connecticut, a town close to mine. It was put to music by the Pulitzer Prize winning composer William Bolcom and has been sung before thousands. It accepts grief as impossible to avoid or fully overcome, but also assumes an afterlife as part of the mystery of human existence.

A strong part of a state poet laureate’s function is constantly to remind readers and listeners that while we live on a planet of suffering, we also live in beauty and mystery—with butterflies and waterfalls and slowly falling snow and even orange peels and green shoelaces.

SA: As poet laureate, how do/did you balance speaking on behalf of a people with offering prophetic or critical commentary on what’s happening?

AM: I plan to do it by skirting political hot-button issues entirely! I see no benefit to turning the laureateship into a megaphone for political commentary. That would be an abuse of the office, in my opinion. Politicians largely leave laureates alone, and it’s a wonderful thing. In America, we aren’t expected to praise the president or the governor or the military. Jingoistic poetry went out with Kipling. (Today, if anything, the reverse attitude seems the default.)

I myself believe most citizens don’t go to poetry for political commentary; they go to newspaper editorials and pundits on TV for that. The best poetry in our culture is so personal and idiosyncratic that the collective “we” can seem almost presumptuous, even from a poet who hails from a state or nation’s religious and/or racial majority group.

But here’s the good news: The political “we” is the poetic “I.” This collective “we,” uniquely in America, is composed precisely of idiosyncratic personalities because, historically, America has had an astonishingly, unprecedentedly flexible and shifting sense of “we.” In my personal case, Ohio has chosen as its first poet laureate a member of a less-than-one-percent religious and ethnic minority. I believe such a thing can happen, and has happened, only in the United States.

DA: I obviously feel there is a real need for public poetry at times of grief, yet I’ve published an essay in The Hartford Courant bemoaning almost all dashed-off and heartfelt occasional verse that well-meaning but amateur poets tend to gush at such times. Most is filled with stock phrases, clichés, and the kind of standard sentiment that so wracked Hemingway.

The major thing a poet can offer in a time of grief is religious faith and a sense of perspective. For me such a sense stems from my Buddhist/Christian beliefs in grace, acceptance, compassion, an afterlife. An utterly important understanding to convey is that there is no real cure for grief. Grief won’t go away, ever, but can only be blunted or blurred.

At such a time as the massacre at Newtown, the acceptance that there will never be a real recovery from such unimaginable horror is, paradoxically, a first step to carrying on. There cannot be any easy “answer” to evil and suffering. To write or communicate otherwise is to lie. But to be with others in grief or happiness, to quote from other poets’ poems—as W.H. Auden’s “September 1st, 1939” (“we must love one another or die”) was quoted on 9/11—to attempt to speak wisely and caringly in poems…well, that can be truth; and with truth we may begin to find new ways to live.

Sarah Arthur is the author or editor of eleven books, most recently the anthology Between Midnight and Dawn: A Literary Guide to Prayer for Lent, Holy Week, and Eastertide (Paraclete Press, 2016). www.saraharthur.com.

Dick Allen is the former Poet Laureate of Connecticut and winner of the New Criterion Poetry Prize. His most recent collection is This Shadowy Place (St. Augustine’s Press, 2014).
http://zenpoemszenphotosdickallen.net.