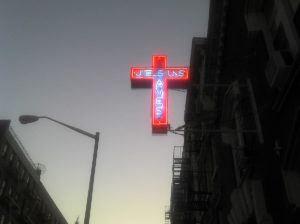 In my sophomore year of college, I wrote a poem. Though I had no idea how to go about doing this, I composed a page and half of hifalutin mumbo jumbo that I was quite proud of and eager to show one of my teachers. He asked me to read the poem out loud to him.

He said some kind things. Then, after a few moments of quiet, he asked, “Would you talk like this to God?”

I shook my head.

What my professor did not know is that he’d touched a raw nerve in my view of the sacred. The truth is, my prayers often were stock, mechanical laundry lists, dusted with a few O Lords and Father Gods to remind me of whom I was addressing.

I believed—or intellectually assented, at least—to the concept of God being near and ever-present. There is a saying that out of the abundance of the heart the mouth speaks. But in prayer I spoke to God with more distance than I would toward a stranger.

And yet, with study, poetry has become my rickety bridge from desolation to the divine. As it is for many others, I am sure, my default setting is often that of detachment: a proclivity for thinking of God as distant, obstructed—intensified when I’m feeling lonely and anxious or condemned by my own failings.

There is some degree of reality in this perception of obstruction: brokenness is a wall that both contains and deflects, while that which once seemed intimate and knowable becomes closed off, wholly unfamiliar.

I once heard poet Li-Young Lee, when addressing a group of graduate students, say: “Language is not the thing. Language is the means toward getting at the thing.”

Whether in writing or in prayer, trust remains intertwined in the creative movement: There is the vehicle, there is the destination, and there is a force that pushes the one to the other. And in it all, a kind of faith that one is heading toward something of consequence.

Attempting to write creatively—by opening the self to the beguiling terror of possibility—seems counterintuitive as a spiritual practice. I still don’t know what poetry is, or isn’t—only that the craft of it is unpredictably alluring, frustrating, and sustaining.

It is difficult not to worship what one adores. But however analogous spiritual searching and the creative process may be, poetry is a poor substitute for the divine. Still, I wonder if our tendency to worship idols is often less a matter of defiance and more a kind of impatience, coupled with a blinding ache for something authentic.

There’s an old cliché that makes its way onto billboards and church marquees: “FEELING FAR FROM GOD? GUESS WHO MOVED?”

I find the taunt here unsettling, an oddly uncompassionate approach toward those who are at best questioning, and at worst, truly in agony and desperate for a sacred presence.

Even Christ, in death, felt far from his Father. “My God, my God” he cried, “why have you forsaken me?” In his agony, Jesus chose to borrow language, quoting the poet-king David who began a psalm of anguished inquiry with those very same words.

And here lies the question of whether or not God actually abandoned his son—or if, in his son’s absorption of the world’s brokenness, Jesus could not (for a time) know the presence of the Father.

I’m inclined to believe the latter.

As poetry has caused me to reevaluate the way I think about language, so has Christ caused me to reevaluate how I think about God. I understand God even less than I understand poetry. Still, I’ve often found myself thinking of faith in terms of what I know, as though whatever convictions I hold spring entirely from the strength of my own conjured abilities or intellectual posturing.

I try to be more cautious now. Not out of a belief that God is unknowable, but because I am daily coming to see faith as a way of actively recalibrating—un-learning—if you will—my humanly skewed view of him: a reductive view, a view that exalts my own belief instead of the source of it.

Here, again, we may think of Christ. There is John the Apostle’s rhapsodic—dare I say, poetic—prelude in the New Testament: The Word was God…and the Word became flesh. His gospel and the three others in concert with it render a composite portrait of someone profoundly baffling, unpredictable, compassionate, witty, provoking, and powerful—the embodiment of God, a living ekphrasis.

What we are offered is a moving portrait of the divine disclosed: God known not merely by human imagination or preconceived expectation, but by embodiment and recorded language.

The Word became flesh and dwelt among us…full of grace and truth. Here God’s character is revealed, God beyond our circumscribed conceptions: a plain-as-day imparting, yet full of mystery. And it is this mysterious nature of grace—and of writing—that continues to challenge my assumptions about the divine.

Over time, my prayers have become less poetic, while poetry—however I encounter it—has come to feel more and more like urgent prayer: whether in invocation, heartache, or ecstatic praise.

Yes, words will often fail. They will fail to do justice to our deepest longings, betrayals, and wounds. And yet, in that faltering, may we seek mercy for what language cannot touch.

May we yet seek the strength to pursue the Word, full of grace and truth.

Natasha Oladokun is an MFA candidate and teaching fellow at Hollins University, where she studies poetry. She also writes essays for the Indie Film Minute Blog. Oladokun currently lives in Roanoke, Virginia.

Above image is by David Shankbone, used with permission under a CC 3.0 license via Wikimedia Commons.