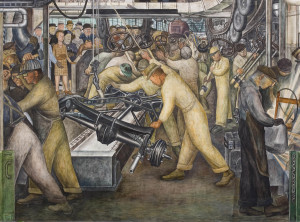 The Detroit Institute of Art (DIA) is obviously not a religious institution. But damn if its Rivera Court doesn’t feel like sacred space.

The Rivera Court consists of wall murals, floor to ceiling, around an indoor courtyard. The murals were painted by Diego Rivera (1886-1957), the famous Mexican muralist. Rivera himself was not an especially religious man, to put it mildly. He was pretty clear about this fact. “I am an atheist,” he once said, “and I consider religions to be a form of collective neurosis.”

The content of the murals is as secular as the man. Rivera began painting them in 1932 (finishing in 1933), an era when the auto industry in Detroit was pumping out product full throttle. The murals portray, for the most part, working people hard at work. That’s probably why they are known as the Detroit Industry murals.

Why was a Mexican muralist—known at the time mostly for works portraying the history and everyday lives of people in his home country—commissioned to make art about Detroit’s manufacturing economy? A couple of sentences on the DIA website do a succinct job of explaining the project.

You can understand, then, why the industrialists of Detroit would pay good money for a mural by Rivera. They, too, saw “industry and technology as the indigenous culture of Detroit.” But this does not explain why the murals create—perhaps despite themselves—a sacred feeling.

In 1986, the art critic Robert Hughes reviewed a retrospective of Rivera’s work on display at DIA. In his review, Hughes tackled the question of why Rivera chose murals as his primary medium.

“Mexico,” Hughes explained, “had a huge illiterate population, used to learning Church doctrine by looking at images. Painting had little or no competition from other media. It could be as direct a form of social speech as it had once been in the city-states of the Renaissance.”

So, part of the reason that it feels, when standing in the middle of the Rivera Court, like standing in the middle of a cathedral, is that there is a direct lineage between the two. Rivera was recreating, for secular space, what the stained glass, mosaics, and murals had done in churches for hundreds of years. Instead of telling religious stories, Rivera was telling social, historical, and political stories.

The largest Detroit Industry panels focus on what is happening within factories (Rivera made many studies of the Ford River Rouge plant as the basis for these images). Workers pull and push and tug and bang. Blast furnaces pour out molten metals. Machines whir and clang. In these panels, Rivera shows us, literally, the cogs of the capitalist production process.

It has often been pointed out that Rivera was at pains, in his mural, to place his quasi-communist and pro-worker politics center stage (Rivera had officially broken with the Communist party by 1932, but was sympathetic with the politics of the far Left). Another mural by Rivera, Man at Crossroads (1933), was destroyed at the Rockefeller Center in New York because he famously refused to remove the portrait of Lenin he’d included in the work.

There’s no question that Detroit Industry contains a statement of leftwing, pro-worker politics. But what is often less noticed is the degree to which the specific politics of Detroit Industry are embedded in a greater cosmic narrative that is importantly pre-political. Put another way, Rivera embedded his pro-worker politics in the framework of a universal mythology.

For Rivera, the social, historical, and political story of human industry is related to a deeper, more fundamental story. Rivera portrays human industry as but an extension of a vast organic process that is cosmic in scope. The blast furnace on a lower panel, for instance, is connected to the natural forces of a volcano on the panel just above it.

Rivera intended that viewers of Detroit Industry should start reading the “narrative” on the eastern wall. At the center of that wall is a panel showing an infant child curled up in what looks like a womb, though it is also the root system of a giant tree. The rest of the mural unfolds from this “seed.”

Detroit Industry makes it very clear that human industry is an extension of more primal productive forces. There is a greater power at play, and that greater power manifests itself as the cycle of birth and death, creation and destruction. At its core is an idea of the cosmos as fundamentally creative. Individuals (human or otherwise) who are closer to this production process are also therefore more valuable, more vital. They are, in the Judeo-Christian sense of the term, more sacred.

Rivera borrowed much of his imagery—the fecund females at the top of the eastern wall panels; the reclining figures symbolic of the four races at the tops of the central panels, etc.—from Aztec mythology and the sacred art of other pre-Columbian peoples. He fused this imagery with storytelling techniques taken from Christian churches and from his deep knowledge of Renaissance art. The end result is a work of art deeply infused with spiritual form and content.

The only question is (and this question has dogged Western art since the early Renaissance): How does one use this new kind of sacred art? There is no specific form of worship or manner of ritual to be performed at the Rivera Court. No method for getting in touch with the deeper forces on display.

A troubling vagueness, therefore, hovers silently in the courtyard at the Detroit Institute of Arts. We’re not crazy to stand in the middle of that room and feel the aura of the sacred. But, what, exactly, are we supposed to do here?