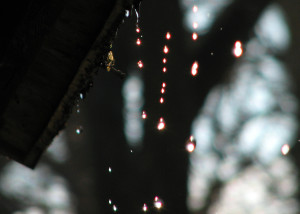 Judaism tells us how to leave.

Leaving the Sabbath. Leaving Israel. Leaving a marriage. Leaving life. We have rituals and words of prayer and entire theologies and words of wisdom about departure. Sometimes we leave with candles and sweet smells. Other times we depart with a divine request for safety as we journey. When leaving our spouse, we sign legal documents and ritualize the end just as we ritualized the beginning. And other times, at death, for instance, we depart with confessing all our sins. It’s only then that we’re ready to enter the next world.

But we have no ritual for leaving Judaism itself. There is no escort. There are no words of blessing. Nobody holds your hand and wishes you well, bestowing you with gifts for the next phase of life.

Sitting in church, I prayed. I stared long and hard at the enormous Jesus with his leg bent ever so slightly, with the white linen loincloth, with his head hung and his eyes closed, blood dripping, draped on the cross. Dear Jesus, please show me what to do right now. I just need some clarity.

I’m not unfamiliar with praying to Jesus. In the Milk Grotto in Bethlehem, a cave that sweats Mary’s milk, I wept. Tears, after all, are a kind of prayer. At the Church of the Holy Sepulcher, in Jerusalem, I’ve wiped my face with holy water. There, in one of the busiest holy sites in the holy city, I offer Jesus a restful slumber. He is a busy deity, with many requests.

Father Bill’s church was no different. As I prayed, it occurred to me that I was there to serve as an escort. I wasn’t there as a way to remind the groom that Judaism is amazing and please, dear groom, just hold on. We’re worth it. Your ancestors didn’t sacrifice themselves just so you could stand next to your bride and vow to raise your kids in the Catholic Church. No, that’s what a different rabbi would have said before he or she refused to serve as an officiant.

In fact, I didn’t have much to say during the marriage ceremony. I mainly stood around and smiled, made sure to remain on the right side of Father Bill, and watched the alter boys in their brown frocks and braided belts, wondering if their parents forced them to attend church or if they felt pulled to prayer and ritual. I read the booklet and recited a few meditations. I tore at my cuticles. I made eye contact with the Jewish family members. Our groom wasn’t ever coming back to Judaism.

I was the first rabbi to share Father Bill’s church, and probably the first rabbi to stand beside him and shed a few tears. Rabbi Akiva, a famous ancient sage, was said to have found his way to Judaism later in life after years of watching water drip on a stone. The water slowly eroded the rock. He believed, at witnessing the slow, gentle erosion, that our tears have the power to transform all the hard places in the world. To erode and recreate and smooth.

Jewish approaches to intermarriage are hard. Intermarriage is the impenetrable rock. No amount of water has eroded the rigidity. But Job tells us, in Chapter 14, verse 9, that water wears down rock. If he can utter these words, after all of his pain and sacrifice, certainly our tears around communal loss can transform the hard places.

My tears in church that morning were about many things. When the couple exchanged rings, and when Jesus was invoked as being part of their bond, I was sad for her, not for him. I wished I had known them throughout their courtship. I could have warned her to quit this Jewish guy and go find a Catholic man that shared her love for Jesus. One who would sit in church and take communion. One who would visit the snow-filled lot to choose a Christmas tree, and one who would, at the first sign of spring, stuff Easter baskets full of chocolate bunnies and painted eggs.

I wanted her to know that there was nothing sweeter than being in sync about the heavens and the earth and how they operate, but it was too late. Somebody had likely already told her all of that. And they’d failed at convincing her. Because we love who we love. And there’s no sense to it all, at the end of the day.

I won’t accept another invitation of this kind again. My saying yes was one of experimentation, of wanting to understand the restrictions by living the experience, but in the end, it didn’t really work. There was no co-officiation. It was a Catholic wedding with a pretty rabbi as window dressing.

We should escort, with grace and acknowledgement that another religion offers much, that ours isn’t the only one, or the best one, or the one where everybody belongs. It’s true; Jews fight to keep our own. We believe in numbers, and in that, there’s an aspect of scarcity rather than abundance. Generations of Jews are now lost with the groom’s choice to wed a devout Catholic. There is sadness in that realization, but it shouldn’t prevent us from doing the work that clergy are expected to do—rethink, transform, create, and love.

As Father Bill walked me to my car, he held my hand. He was like my grandpa. Slow and gentle. Afraid to let me go. We strolled through a late spring garden in full bloom. I told him I’d likely never see him again. I bowed in gratitude, among the large leafy hostas and the red maple, near a statue of Mother Mary. And then I couldn’t help myself. I asked him why I was stationed on his right, and never on his left.

Image above is by Jan Tik, licensed by Creative Commons.

Danielle Leshaw is the Rabbi and Executive Director of Hillel at Ohio University in Athens, Ohio. She’s been published in The New York Times, Tablet Magazine, The Jewish Daily Forward, Mutha, Moment Magazine, is a Puschart Prize nominee, and is a two-time recipient of the Ohio Arts Council prize, the leading state grant for writers and artists. To see more of her writing, visit www.DanielleLeshaw.com. She’s also on twitter (far too frequently) at @RabbiDanielle.