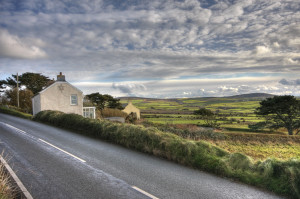 Now spring has come again, the season that’s best for hope. Post-Lenten promises are fresh as a baby’s breathing, and the failures that eventually spoil them are as far away as the height of summer’s heat.

Hope can make us believe in endings as well as beginnings, in the idea that we can accomplish the hard tasks of life and see them to the finish.

However, as usual, I get pensive about things coming to a close. When years of labor spent in achieving something are about to meet resolution, there’s part of me that puts on the brakes—not strong enough to stop the momentum, but strong enough to set my mind churning.

“What now?” becomes the question. Achievement ends purpose, and purpose gives meaning. When foundering around for purpose, we can’t help but feel disoriented.

I’ve heard people express what I’m describing along these lines: “Without what I’ve been doing for so long, I expect I’ll be a bit lost.” And that feeling is all the more profound when the end is an event more necessary than relished, more required than sought.

The Germans are always good at giving words to concepts that we all know, but have never given a name. That’s why I turned to them when I was looking for a term that would fit. After all, Germany is the home of much modern philosophy, and the phenomenologists were the ones who delved into the power of empathy—of consciousness and experience.

Of course, we all know some words: Schadenfreude, the pleasure derived from someone else’s pain; but there’s also Fremschamen, which is the mortification we experience when we see someone else humiliated; and Fernweh, which apparently is the opposite of homesickness—i.e., a yearning to be anywhere but where you are.

I’ve noticed that many of these concepts involve pain of some sort, but the Germans also have words for the pleasure of relaxing after a hard day’s work: Feierabend; for having a song stuck in your head: Ohrwurm; and for the lack of knowledge that should be, but is not, possessed: Bildungslücke. I’m told that some of these words may just be idioms; regardless, there’s pleasure in finding a nominalization for something experienced but never spoken of (is there a word for that too?—the delight of discovering a term?).

The word that comes closest to what I’m describing is Torschlusspanik, which is roughly described as the “panic of the gate,” a sensation that comes when you feel closed in by life’s circumstances. But that’s not exactly right for what I mean. What I need is a word for having worked diligently, tirelessly, to achieve some result that isn’t particularly desired—or isn’t desired at all. It’s something that must be, that should be, but won’t be rejoiced over when it comes to be.

This must be a common emotional state; it has to be akin to the feeling a parent experiences after a year’s worth of planning to give a child away in marriage, or the feeling that a traveler has after making arrangements for a long trip of unknown, perhaps unending, duration.

Kiss the bride and off she goes; step on the gangway and wave goodbye. It was all done with earnest zeal and herculean effort, and it would all be done again—because it was the right thing to do. It’s just that it comes with a cost, a loss that’s inextricably part of the gain. Is there a concept for victory-grief in the Saxon tongue? Of success-loss?

The occasion for my [insert German word here] is the sale of some country property that has been in my family for nearly as long as I have myself. It has brought me immense joy—indeed, has formed me in more ways than I can fathom. The Southern “sense of place” Eudora Welty spoke of never required explaining in my English classes, because the place to which I refer gave me all my senses to begin with.

But the time has come to let it go; common wisdom dictates; adulthood prescribes. And more effort than my own has gone into the process of fixing things up and making things sharp; there wasn’t much work in that, as the place spoke for itself. It was its own recommendation. Anyone who had eyes would love it.

Still, while I was in the process of painting, washing, dusting, clipping—all with a clear purpose and an inevitable goal, I had this deep-set feeling from time to time that said: Wait. Stop. Hold on here a minute. This is all a misunderstanding. This is all a mistake.

Nevertheless, discretion and level-headedness quickly returned. They had to. Onward. Onward.

And then, one day recently, what had been only theory became reality: a For Sale sign and people “just looking” became a Sold sign and people really meaning to buy. An offer; an acceptance; and the deal was all done. I spanked my hands clean of the act and turned away.

But I have to say that right now, the sun is too bright. The spring air is too crisp and cold. It’s as though I just stepped out of a plane, having landed in a country yet unknown.

I’ll get along okay; adjustments are part of life, I know. But I expect to be perplexed and thrown in the days to come. For the world will have lost one of its directions for me, the one that meant the most.

I’ve heard that you should not return to a place where you were happy. That makes sense. I can’t exactly explain the experience such a thing would be, or why I can intuit the feelings that it would conjure. I just know. For that matter, you probably do too.

I bet there’s a word in German.

Image above is by Robert Moore, licensed by Creative Commons.