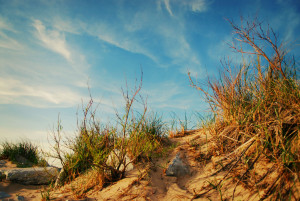 Route 41 takes you along the coast of Lake Michigan out of Chicago. If you are trying to stay close to the lake, then veer off Route 41 at Whiting and tack southeast onto Route 20. That’s where the landscape takes a turn toward oddness.

You’re between Chicago, Illinois and Gary, Indiana. Those excited by intellectually fashionable terms would call this area a “liminal space.” It is a hazy, indeterminate quasi-urban wasteland shot through with train tracks and industrial properties, some functioning and some long ago abandoned to the elements, steel and iron rusting slowly as the wind and the sun and the rain do their work, season upon season.

There are people here. They live in pocketed neighborhoods squished between fields of gasoline silos, generating plants, and graveyards for dead and dying railroad cars, old trucks, unidentifiable machines sinking inch-by-inch into the earth.

European working-class immigrants built these neighborhoods long ago. You can tell by the brick and stone churches, the spires of which rise up above the other buildings just as they do in industrial England, Belgium, the Ruhr Valley, Poland.

Here, in the dead zone between Chicago and Gary, many of the signs and advertisements are now in Spanish. A shack-like structure right up against the side of the road proudly advertises a blend of Mexican and Polish food. One ethnic working-class era bleeding into another.

Just before reaching the city limits of Gary, Indiana, you may have the thought, “The apocalypse happened long ago. This civilization has already been destroyed. We are simply living in the wreckage.”

Gary goes by in a blur of collapsed buildings and abandoned businesses. A small white house has been converted into a barbecue joint. Thick, sweet-smelling smoke pulses through the fence and up the backside of the home, billowing out into the rest of the neighborhood. There are two more ramshackle barbecue joints just down the road, one set up, legally or not, in the remnants of a now-defunct mini-mall.

The smell of smoking meat is almost overpowering. A young black woman in a green-orange dress walks down the street with a languid pace and insouciant tilt of the head that evokes rural parts of Southern Georgia. Gary, Indiana suddenly feels like the sort of area where you could stop at the side of the road and buy boiled peanut.

Does this mean that Gary, Indiana is losing its moorings in place and time? Are history and geography blurring focus here and, against the known natural laws, blending according to a different logic?

Route 20 branches again after Gary. Take Route 12 toward the Indiana Dunes National Lakeshore. The landscape shifts abruptly. Trees have sprung up everywhere along the side of the road. The smell is of growing things, budding things, of wet earth moistening into the fecundity of spring. Through the open window of the car can be heard the rubbery singing of finches.

Take a left turn on one of the smaller roads that heads out toward the dunes. Park the car. Walk along a path that winds between giant sand dunes topped by delicate conifers that should not, according to your understanding of trees, be able to grow and thrive on a base of sand.

The dunes open out to a view of the water. Lake Michigan, calm and nearly waveless this day. A layer of fog rests just above the water. Your eye follows the line of the coast out to the east.

There, silhouetted by the afternoon light and the muted backdrop of the fog, are giant structures and smokestacks from a factory just at the far edge of what the eye can see, just far enough away into the mist that it could be a mirage.

The path leads back into the dunes and through a copse of trees. The leaves of the trees are a light dazzling shade of green. New life. Three young men, playing hooky from somewhere, are smoking a joint a hundred yards or so ahead. They eye your approach with a mixture of defiance and mopey shamefacedness.

The air is filled with the scent of honey, and blossoms, and the pungent strains of skunky weed.

The return to your car is by way of a long wooden staircase that snakes its descent along the undulations of a dune that must be hundreds of feet high. From the top of that dune, the parking lot is but a tiny area of gray lost in a greater forest of sand and swamp.

The drive back to Route 12 will, probably, contain a long pause as you wait for the nearly infinite train. It rattles by, black and brown tanker cars stretching into the distance.

Stopping for gas just outside Michigan City you’ll watch a tiny black spider jump out from a crevice in the gadgetry of the gasoline pump in order to snare a fly. The spider will secure the fly in her hairy mandibles and will drag the prey back into that crevice, her lair. The fly will buzz and fidget to no avail. The spider moves slowly, inexorably into the darkness within.

One of the first things that God does in the Hebrew Bible is create. Then he sees the goodness of what he created. He sees goodness and he proclaims created things good. Later, of course, he destroys many of the supposedly good things he created.

So, the question inevitably arises: Good, perhaps, but how good? Good in what way?

What you find out in Northern Indiana, in the stretch between Whiting and Michigan City, dunes included, is that God’s Creation is good, just as promised. And also strange. And horrible. And sad. And ugly. And glorious.

And so you may be forgiven, in Northern Indiana, and many other places too, for thinking that the goodness of creation is not an answer, not a conclusion to be drawn, but more like the posing of a riddle.

Image above is by Ann Gordon, licensed by Creative Commons.