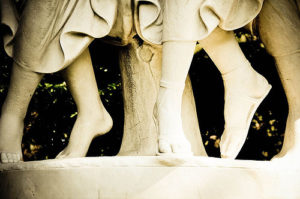 My mother was a dancer. I use the term dancer in the most flexible possible way, to mean: “One who dances.”

She said that she had always wished to be a ballerina—an image that didn’t compute with my childhood understanding of my mother, a labor room nurse who played racquetball at the YMCA, and otherwise attended a smattering of sports events in which my siblings and I competed.

She wore tight jeans and therapeutic sandals, and most of the dancing I saw her do was with her friends in the neighborhood on Friday afternoons, when everyone finished work and school, and the children played while the women drank wine coolers and bumped hips to Neil Diamond hits.

For the children, women dancing and drinking in the living room with the massive stereo speakers turned way up, was something to be avoided. So we played hide-and-seek, Legos, Barbies, and otherwise averted our eyes to the mothers.

We did not understand how that peculiar ritual could achieve some inner levity for the women. And here, I use the word “levity” to mean high spirits or an internal lightness of being.

My mother’s dancing was cutting ties with the ground below. She did not care what anyone thought of her. She did not notice if we urged her to stop. It didn’t matter if anyone immediately danced along beside her. The woman needed to boogie.

And she dances still—in her sixties—though the character and frequency of her dance have changed a bit. She no longer lives in a neighborhood, but with my dad on a small farm in rural Indiana. We’ve all grown up and she’s retired, so many of the old sources of stress have resolved.

Somewhere along the way, she and my dad really plugged into their religion, which became a different way to relieve the fatigue of being a human being in relationship with other human beings.

And the need to dance…has transferred to me.

My mother didn’t give it to me, or anything. I don’t believe it’s contagious. But I have inherited it by virtue of my midlife credential as a woman/mother of a number of children, who regularly feels a pretty firm desire for lift-off.

I’m trying to remember which came first, the thought that lift-off might be possible, the desire for it, or the need? Because my awareness of that release was quickly followed by an imperative: I’ve gotta dance my way out of this, even if only for a minute. This, being the consistent, decades-long expansion and contraction of my own personal aerosol can.

The reason contents of an aerosol can remain under pressure, is because there is limited feasibility for the safe and licit expulsion of contents therein, especially since I found religion at a younger age than my parents.

I have chosen to live under stricter rubrics, and find myself asking: when and how is it appropriate for a Christian to lose oneself?

I attempted prayer first, and continue to do so— a sort of temporary self-forgetfulness aimed at a more total contemplation of the Holy Trinity. My faith supplies some variations for dealing with the body during such exercises, ranging from sitting, to standing, to kneeling, to prostration.

Sometimes these practices make me more, rather than less, aware of my self and physical presence in the sanctuary; considering my body’s stubborn insistence on continuing to function as a body does, even in that holy place.

As I age, the presumption of the flesh asserts itself in fresh ways, so that when I got down on my knees recently, attempting to prostrate myself in front of the Blessed Sacrament, what I felt was not a decrease in self-awareness, but rather a tight shock of pain in the ligaments of my left knee, attesting that no, most certainly, for me, this is not the way to lose oneself in the presence of the Lord.

There is something worshipful about, not just subjugating the body, but incorporating it fully: its willing movement, its grace, its awkwardness, its sexuality, its creativity, into …what? Not worship precisely, but maybe an act of self-forgetfulness.

The music and the body align in unobstructed forward motion. If the aim were only stress relief, I suppose one could achieve the same effect from exercise, physical labor, or making art, even.

But I look at the communal, celebratory nature of certain interpretive dance cultures—followers of jam bands and festivals, for instance—and think that maybe there is something there for the Christian, that if it’s not worship per se, is at least a communion of sorts, in a crowd of friendly exiles and pilgrims, and a way to exhaust and quiet the body to make way for future contemplation and ongoing self sacrifice.

To dance is to triumph over the flesh, since every dance is in some way also an exhibition of the spirit—the internal powering the external to make compelling visual art.

Or maybe it’s not compelling art, but just a woman in her kitchen, turning up some blues, closing her eyes and swaying her body while the children look on in puzzlement, because this dance is the one thing in her day that is not arrested by obstacle and resistance. God bless her.

Image above by Valerie Everett, used with permission under a Creative Commons license.