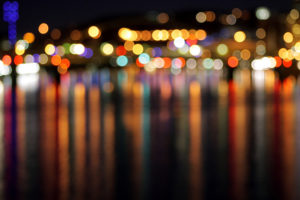 As a newish, struggling Christian recovering from two years in a fundamentalist youth group, I committed to starting afresh in college. I was going to get fellowship right this time.

My high school church had been all about the rules: No secular music (unless oldies from the 1950s). No shorts with hems higher than the ends of your fingertips. No left-leaning politics.

But the people I met at Intervarsity Christian Fellowship at the University of California, Riverside, were all about the heart. As I started spending time in Bible studies where I learned to read the scriptures for myself, I wished I had understood all along that Christianity was about following Jesus, not a list of don’ts.

But even the heart seems to have some rules. The heart can quickly become an idol, our emotions, laws.

Near the beginning of my freshman year, a friend surveyed my stack of Beatles cassettes and offered, “Either you’re for him or against him.” Musically speaking, that meant secular albums were nails in Jesus’s wrists.

“It’s not about rules,” she cautioned. “It’s about the heart. But if you follow him with your whole heart, why would you want to listen to anything else?”

In her recently released memoir Night Driving, Addie Zierman explores the evangelical obsession of faith based on emotional effort, the danger of pressuring ourselves to constantly shine, shine, shine for God. She writes:

What I’m trying to say is this: if you spend an entire summer—an entire lifetime—driving to the beach to gaze at the sun, it’s bound to damage your cornea, crack into the cells of your eye structure, change the way you see things. Spend too long staring directly into the sun and you’re bound to become a little bit blind.

Zierman describes the constant exhortations to stare at the sun. Be “on fire” and “sold out” for Jesus! Be “all in!” She recounts Teen Mania’s Acquire the Fire youth conferences, where the director, Ron Luce, tells students they can only know God is real by feeling him: “People can come up with an answer to every logical argument you can give them. But they can’t argue with your EXPERIENCE.”

It’s a dangerous theology, for it implies that our feelings are what save us.

Without even realizing it, many Christians turn to idolizing their own expressions of belief, namely the emotional highs. Several worship songs (“In the Secret,” “Set a Fire,” and “Above All,” for instance) praise our emotions about God more than his character. At one charismatic megachurch I visited, the pastor commanded the Holy Spirit to descend. When the pastor wasn’t satisfied with the number of people screaming and passing out, he started barking orders: “More, Spirit! More!”

Even the early church in Acts found places for reasoned discussion. Their faith wasn’t merely a succession of supernatural highs.

Having heard many of these highly charged phrases in evangelical churches, I’ve felt guilty at times for not “burning white-hot for Jesus.” But “white-hot” suggests a frenzied passion more than a steady commitment, a manifestation of personality more than the Spirit.

The evangelical church, as Susan Cain points out in her popular book on introversion, Quiet, thrives on extroverts.  It also thrives on the American value of gritty individualism and heroism, the fiery sermons of evangelists that draw thousands forward during altar calls, another symbol of our addiction to sensational drama.

I’m not discounting public professions of faith on a wholesale level. I know several people who have converted during altar calls at youth camps. God speaks how he will.

Baptism, of course, is a powerful example of bearing witness in front of others—although one of the most famous baptisms in scripture, that of the Ethiopian, involves his pulling over his chariot and getting wet immediately without ceremony or after-party.

Paul of Tarsus preached. He caused a stir in the public square. But he also penned his most influential words from a quiet prison cell.

Zierman’s altar call to readers is an invitation to ride along with her and her two young boys on a winter road trip to escape her weariness of the dark: “I chose this trip not because I am brave but because I was desperate.” Her fire is food wrappers; her crying kids, the brimstone. Her pilgrimage passes through McDonald’s drive-thrus and hotel elevators as a “drowned-rat-of-thirty-something mom in a tangerine bathing suit.”

One of her darkest moments? Zierman’s son dropping her iPhone upon a pile of poop in the toilet. The spiritual climax of the book, for me, is when she handles the mishap with grace, reminding her little boy that accidents happen as she rubs his back, kisses his cheek, and tells him that she loves him.

Quiet grace is the point of the book—and the point of the past decade or so of my life. Faith is not about frenzied attacks of the Spirit but “the daily work of it…when I feel nothing but my own numbing darkness, it’s this steady, boring, beautiful love that carries me through.”

Zierman reminds us that “there are so many different ways that Light manifest itself. It’s the pink and oranges of a summer dawn. It’s the full, bright sun glancing off the wave tips of the ocean. The hazy winter starlight. The shivering waning moon. The falling dusk, still glowing like a promise at the edges of the world.”

Understanding light in all its different forms opens our eyes to the person of Christ, who multiplied loaves and turned water to wine, but also held quiet conversations with outsiders and prayed when no one was watching. He invited broken people to follow him without any emotional contingencies.

Of course, in Revelation we read that a lukewarm church is worthy of spitting out. But who said anything about our mood? There is so much more at stake.

Perhaps “on fire” should be applied to daily obedience more than feelings. The kind of fire that boils the mac and cheese for the despondent child. The heat that sizzles beneath the skin during a white-hot guitar solo on that secular album that drives you to your knees in gratitude.

Image above by Brian Donovan, used with a Creative Commons license.