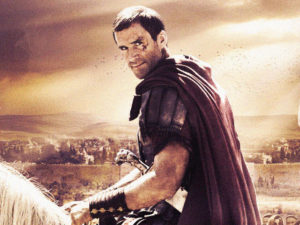 In a well-written and well-acted scene from Kevin Reynolds and Paul Aiello’s recent film, Risen, the Roman tribune, Clavius (played by Joseph Fiennes), questions one of the guards left to watch the tomb of the crucified Jesus.

The guard, drunk in his cups, has been pardoned by the prefect, Pontius Pilate. Clavius knows that the guard was only pardoned from such a dire offense—falling asleep while on duty—because he has sworn to a purchased tale: Jesus’s followers fell upon the hapless Romans, overcame them, and stole the body.

Clavius then threatens the man to get the truth and in return is given the real story—that the stone blew away from the sepulcher, the ropes and chains exploded, and a new light filled the world. But instead of awe and peace, what the guard witnessed has driven him nearly mad. He clutches at the tribune and whispers, beseechingly, a request:

But the tribune can only give him a scant tale with which to still his raging wits: it was the wine the guards were drinking; they were drugged somehow, the light was only the dazzle of a powerful dawn. The soldier is thankful for this lie, glad to have something to grasp onto for the moment. Still, a few seconds pass, and the momentary peace won by the lie—the peace of a world that he could understand—is gone again, and the new world he cannot comprehend returns.

So he turns back to his cups, to drink it all away.

I confess that I have been more than critical of religious films, because I generally find them more willing than capable. Their desire to be powerful often overcomes their first obligation—to be art, not Sunday school lesson.

Then again, whenever I read the snide, knee-jerk dismissal of such films by a bigoted press, I find myself renting them anyway, out of an uncharitable desire to side with my confederates in the culture wars by sticking it to the establishment. Little felt is my insurrection, but score one for the Maccabees anyway. In the end, however, my rally flounders; I don’t wind up liking the movies very much, and hate it that I have to agree. They’re not very good.

I know how hard it is to get a film made. I know how much money it takes and how little return there is on the investment. I know it’s horrendously unfair that Hollywood finances all sorts of fantastical works and knows that the supernatural is big box office, but holds the greatest stories every told in contempt. Elves, warlocks, vampires, zombies—the standard producer is like the great poet W.B. Yeats—who they said would go for anything spiritual as long as it wasn’t orthodox.

So whenever a religious film actually does make it through the obstacle course, it’s a major accomplishment of the will, if not of the aesthetic. The most moving and artistic films from a religious standpoint are usually those that avoid the scriptures altogether (see David Ayer’s 2014 film Fury, for example).

So it was with some trepidation that I rented Risen, a picture about the post-crucifixion investigation of what happened to the body of Christ, told from the skeptical tribune’s point of view. And it was with great pleasure that I found it not only stirring, but well done.

What distinguishes the film is how close it remains to the character of the Clavius, who—like us all—is afraid of what he is finding out, of what might possibly be true, and of what that will mean if it is.

Will he follow, or will he find himself a lie to believe instead? The tale that he offered the guard is always there, conveniently available to him; which will it be?

To my way of thinking, Fiennes plays the tribune just right—a battle-weary soldier who has seen his fill of death. His revulsion at the gore-making required of him by the empire makes him a clean slate when the events unfold; he is a devotee of Mars, the god of war, but the bonds of his faith are weak. Further, he is both witness and executioner at the crucifixion. So when Pilate gives him the task of ensuring that the body of Jesus is not stolen, then later with the task of finding that presumably stolen body, the tales of the resurrection are put down as impossible.

He has seen too much of death, has slain too many men to waste himself—including the Nazarene—to believe anything but that the end of a man is final. His greatest struggle is the reconciliation of what he has seen in his experience with what he is seeing now—of what he knows men to be, merciless and selfish and mortal—with what he is seeing they are capable of—merciful, sacrificial, and eternal.

There are some flaws in the film—the disciples come across as a weak lot, even goofy at times—and Jesus himself is lacking in any lordly qualities, being all hugs and glad-handing. But the focus on Clavius keeps the picture strong and relatable. In another fine scene, he wearily questions Mary Magdalene, promising her freedom if she will give him the Nazarene.

Such lines speak much to a man who daily finds himself awash in blood. The possibility of a time when he is free of a life of death makes his quest, though undertaken at Pilate’s command, a personal one. He cannot avoid confrontation with the story he is told, and must follow it down to its truth, just as all of us must. Accept it or reject it; there is no half measure to be taken, and no other choice that matters.

Image above of Risen is used in conjunction with this review.