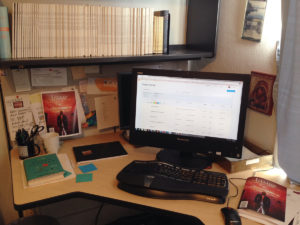 About a year ago we at Image dragged ourselves into the twentieth century and started accepting unsolicited submissions online. We had held off partly because we were worried that the numbers would balloon—and the amount of work we receive did immediately triple. (We’ve added another reader to help us keep up, but if you feel like you’ve been waiting a while to hear from us, now you know why.)

Though we’ve had to budget more reading time, all in all, the change has been a good thing. Having more submissions lets us be even choosier, of course, and there’s more international work now. (We still accept paper submissions but they’ve slowed to a trickle.)

Since I’ve been spending more time reading submissions lately, I’ve been reflecting on the nature of that work. When I was a young writer sending work around, the selection process at literary magazines was mysterious, and though there is already plenty of wonderful advice for writers out there, I thought I’d share a little here about what reading Image submissions is like for me personally.

When I’m not copyediting, doing layout, wrangling the schedule and contracts, bossing and consoling writers, trying to squeeze blood out of the turnip that is our marketing budget, or doing odd jobs, I’m the first reader for prose. That means that each quarter after I send an issue to the printer, I begin the process of culling a few hundred fiction and nonfiction submissions from the previous three months down to the two stories and three essays that go into a typical issue.

That may sound glamorous, but for me it’s mostly about wrestling with certain doubts and fears.

This is what it’s like: here is a mountain of prose. Some is in envelopes; most is online. Some of it is bad. A tiny fraction, much less than you would think, is so bad as to be entertaining. A lot of it, by far the majority, is not bad, is fine, competent, even accomplished, addressing important subjects, but it is boring.

For me, this is the hardest part of the job. The really beginner stuff, all right, fine: this writer is in college, or prison, or recently retired and always wanted to write and has just started. These are writers who have a long way to go, and they probably know it, and it’s not hard to imagine that some of them will eventually get there. They’re at the steep part of the learning curve.

But the stuff in the middle is heartbreaking. It makes you doubt yourself as a reader, for one: am I bored because this is indeed boring, or because I have a short attention span from too much Facebook?

In this middle category are many writers who are pretty good but seem unlikely to get much better, because it’s so hard to put a finger on what’s wrong. There are images, anecdotes, scenes, conflict, weighty themes, genuine humor; the prose rolls along without hiccoughs—but I keep thinking I’d rather be elsewhere.

How many submissions have I read today? How many more can I get through in the next hour? Is it too soon for coffee? What’s on Facebook?

Something genuinely, clearly bad or crazy is refreshing, a palate cleanser.

Choosing work to recommend, for me, is about trying to mediate between two fears: First, that my attention span, my sensitivity to what is good, has become so distorted by the mountain of adequate writing that when something really brilliant comes along I’ll be too brain-dead to spark to it and will reject it without noticing.

Apparently I rejected Jamie Quatro once, without even a nice note, and I have no memory of this.

The second fear is of smoke and mirrors. Have Facebook and reading online in general so conditioned me to expect flash and dazzle that I fall for them even when they’re empty? This comes up less often, because I am easily bored and nearly immune to being dazzled, which is almost an asset in this job.

Lots of writing wears its edginess on its sleeve—murder! pop culture! extremely bad parenting! nonstandard spelling and punctuation!—and it always gets my attention right away, naturally, before it lets me down, which then returns me to my first fear: Am I let down because I am brain-dead because of the mountain? Or is this, in fact, brilliant stuff?

Here is the fear inside both fears: it’s easy to keep choosing the same story over and over. Am I really open to voices that are new? In theory I would not mind if Image published more experimental fiction. But in practice I see so little experimental fiction that I think is really good.

What saves me are the two pieces in a hundred where the self-doubt falls away and I forget to think of myself as an editor at all. After a page, the critical voice shuts off and it’s just enjoyment. Facebook has not ruined me! I think with relief. I am still capable of recognizing and savoring beautiful writing. I hope that’s an experience you have when you read Image: not the haystack, just the needles.

I almost always know within a page whether I’m going to fall in love, and it’s no mystery. It’s really just the sentences. Strong sentences, in whatever key, have got music. The subject matter is almost irrelevant, at least at first. There’s a confidence and a gracefulness in really fine prose that just blazes out unmistakably.

I think some writers, even experienced ones, underestimate how important sentences are—both how much time it takes to get them into shape, and how worthwhile that is. The most profound essay, the most moving story won’t get a hearing if the sentences are boring or awkward.