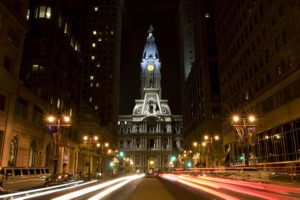 Last September, I was in Philadelphia for the first time since my freshman year of college. In the train station, I paid attention to what was new, though I suspect memory shouldn’t take a conscious effort. I thought it would be easy, that I could walk into the mall, down the escalator (I remembered this much: the train runs below ground until it reaches the outskirts of Center City), and it would be like it always had been. Twelve years compressed into nothing.

I hated and loved Philadelphia, and the moments of excitement and adventure I felt as a freshman away from northern Minnesota couldn’t make up for the way I missed my family, my dogs, my forests, my quiet roads. The Midwest tore away at the home it had made in my body for nineteen years, the woods and fields woven into the way I looked at anything, the long shapes of vowels replaced by speech that said I didn’t belong.

During my freshman year in 2000, I lived in a Spanish-speaking residence hall, and Spanish quickly became the language of grief, of far away from home. That fall, I learned the word añaro. It’s a Puerto Rican word that approximates nostalgia, the thrust of the heart toward what is known and loved but can’t be reached. The smell of roast beef, baked carrots, and cedar in my parents’ kitchen. The Swedish Christmas ornaments first out of their boxes for the year. Cinnamon and tobacco. The jet-fuel smell of a car leaking antifreeze, damp towel of rotting wet maple leaves, and the burned smell of coming snow on the wind.

Philadelphia was my first city—my first train ride through wealth and history that didn’t involve trapping or mining. It was also the first time I felt the tug of taking myself far from everything I loved. My mother, trapped in a cycling nightmare of mental illness and ineffective medicine, had spent the previous years cutting into herself, breaking her bones, leaving trails of blood and soiled towels I found after school.

Every phone call, every long silence from home, meant that I was escaping, and that bad things could happen to a girl who escapes. That my mother would amass new scars. That I would come back somehow different from the blood I’d been washing away since I was fifteen. That the East Coast would let me imitate it, take me in to the busy, cool heart of the city.

Before I boarded the plane, my father tried talking me out of leaving again, a sort of joke that broke his voice. He said, “We’ve been preparing you for this all your life.” I was the first to leave, the first to have an adventure, to first to be unprotected, the first to fly on planes, the first to soar away. But blood, in the end, doesn’t work like that.

On September 11, 2001, I was home from college indefinitely, and I slept through the early morning at my parents’ house. Light pushed through the pine trees that ringed the field, and my dog barked at deer. I slept on my back, letting the sun in.

My sister’s friend spent a year with Maori people in New Zealand, sleeping under the stars on a blanket. They warned her not to sleep on her back, cautioning that it opened her up to the spirits. In medical school the following year, she found that it puts pressure on the back of the brain, that the cerebellum meets the skull and a shallow ocean of fluid in a fit of neurochemical excitement.

I dreamed of my sister wearing her strawberry-print dress. She grabbed my hand, and we ran together to a patch of dirt in the middle of the yard, where the earth was fresh and covered with strawberry plants. Papery white flowers bloomed close to the ground, and near the center of the garden grew two tall tulips, beautiful and out of place.

And from out of a morning of deep sleep through sunlight and early autumn birdsong, it was already afternoon.

On the television were people with their blood types written on their foreheads, though a donor can’t offer herself directly to the need she sees, can’t hook herself up to the same machine as an injured man and let her heart give to its content. Blood doesn’t work like that. Blood came in from the Midwest and the South, tested blood, blood a week old. No planes flew except for these, their bellies full as mosquitoes.

For months, I prayed only in broken Spanish, the words and phrases I knew from movies. Dos flores. La playa roja. Las manos de Dios. It was the first time I’d chosen to be homesick, to hang foreign in language and let grief mingle with strangeness, talking to God as if one or both of us were lost.

I imagine her interrupted during the Today Show as she folded towels, all that therapy moot in a second, because no one understands terror better than someone taught to believe it’s all in her head, and then realizes that all the therapists in all the world were wrong. I imagine her seeing into her own gut and keeping me away from what was outside my eyelids. I imagine her lonely and suffering, curled on her swollen knees in front of the television.

In the Philly train station, I look for the things that have been calling me back for twelve years, wanting me to feel that homesickness again. I think of tragedy, of global horror that stuns language, but also of years coming home to the blood I loved and then running the other way.

It’s a small snag, the size of a fish vein. Those hours of protection, like a gift. The other daughters on other planes. The other languages giving us new words for homesickness. The way we let the spirits in. The way blood doesn’t work like that.

Image above by Michael Righi, used by permission with a Creative Commons license.