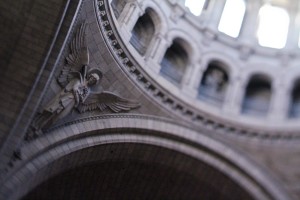 This poem coaxes me to inhabit a story I’ve heard many times, and makes it astonishingly new, summoning me with the urgency of the second-person perspective and the half-answered question of the title. It’s a poem that asks a lot of its reader—nothing less than to experience a mother’s grief at the loss of her son—and yet offers so much in return, in the short space of five stanzas. Maybe because I am a mother, but certainly because of the poet’s skillful shifting of imagery and energy, I feel the weight of this poem grow heavier with each stanza as it moves further from the flutter of the angel’s wings in the opening line—and inexorably toward the cross. I love the risk and humanness of this poem: how the speaker registers everything that happens through her body, how the final lines so powerfully conflate the bodies of mother and son, speaker and reader.

than the angel who eclipsed your ordinary life
to see his reflection in the dark
of your eyes.

More strange than when god thumped
in your belly and tugged at your breast, hungry
for earth, for what he had made.

Strange to hear
the command to take and eat of his body
just as he had your own. That in their mouths
you too were dissolving, your blood draining
into thick and useless throats.

Your nourishment drips from his side,
from the mouth that sucked your breast.

A hand flinches toward your chest—a strange
gesture you discover is your own.

Kristin George Bagdanov is an MFA candidate in poetry at Colorado State University, where she is a Lilly Graduate Fellow. Her poems have recently appeared or are forthcoming in Los Angeles Review, 32 Poems, Redivider, CutBank, and others. Her chapbook We Are Mostly Water was published in 2012 by Finishing Line Press as part of the New Women’s Voices series.

Image above by Aubrey Allison, used with permission.