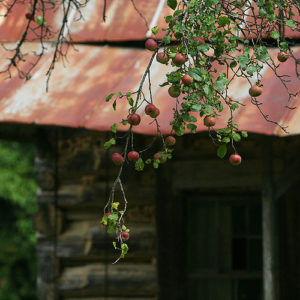 At night at the Ingalls Homestead in DeSmet, SD, we can see the pale, translucent arm of the Milky Way divide a sky of a million stars. The small bright point of a satellite zips across to our left with striking speed and intention. We can’t see the same sky from Evanston, IL.

Down the hill at the homestead, ten acres of corn, beans, and oats are discernible only as a dark patch in a wider expanse of dark. We know that several horses, mules, and ponies must be sleeping in their stalls in the stable, and the kittens that live in the hay-roofed stable have made their rounds of the campground and retired to snuggle in with their exhausted mother.

Our boys have finally quieted down in the tent, and we’re ready to climb the stairs into the tiny covered wagon where we will sleep tonight. We know the boys are exhausted, but they were also worked up from a day of riding horses and wagons and making rope and playing with baby animals. The little one chose a simple wooden jumping jack toy from the gift shop, a toy not so different from the one Grace received for Christmas in By the Shores of Silver Lake.

It’s all so charming, all so reminiscent of the durable enchantment of pioneer life Laura Ingalls Wilder describes in the “Laura” or “Little House” books. The books were favorites of my wife’s family, as they have been favorites of many American families, records of life before there was a “first world,” of a life where Ma and Pa could make, raise, or grow anything they needed to survive. They are reminders that rugged individualism is a true mythology, a living thread of the American experiment that continues to inspire and motivate us.

They became favorites of my seven-year-old, who, along with several other children at the homestead that day, compared their knowledge of the Laura books with one another, recalling how the family lived in a dugout similar to the one recreated in a hill at the north end of the property, trying to figure out how four people fit into the claim shanty, or remembering the names of the Ingalls’ dog or Laura’s doll.

I’ve been charmed by these books, too. Wilder has a sweet, familiar style that recreates the thought-world of her heroine, Laura, immersing us in a world that was already foreign to these books’ first readers.

Wilder’s intentions are palpable from the beginning. She wants to demonstrate that the world she grew up in, the world that has disappeared, was not an awful world of suffering, toil, and illness just because it had less technology. Humans are humans, and they find joy, beauty, and community in spite of, or because of, the hardships of their lives.

Reading these books, I want to take them at face value. I want my boy to learn something of Laura’s resilience and stoicism in the face of disappointment or difficulty, of Pa’s self-reliance, of the children’s gratitude at getting only candy and mittens for Christmas.

They’re even interesting documents regarding the white settlers’ checkered history with Native Americans. Wilder does not attempt to offer any real perspective on the matter, but she does include a variety of voices and positions, and Pa, who in most things serves as the authority, represents the most ethical, if still perhaps imperfect, view in that he tries to imagine the Native American experience and to assess each one he meets as an individual.

You can have a simpler conversation about race and imperialism with these books than you can with, say, Huckleberry Finn.

But there’s a part of me that wants to resist the charm and familial harmony Wilder gives us. It’s a part of me I recognize that comes from ingesting the kind of literary theory that equates gaining a certain ethical advantage with critical mastery, and I further recognize that that’s not the best kind of literary theory—but still: Surely things weren’t always so rosy? Surely the girls fought more often than in the books? Surely Ma harbored some resentments against Pa for taking them to the frontier, where they several times nearly died and, unreported in the books, they lost an infant son.

The way we like to handle such disparities these days is to parody the older example by placing a person of modern sensibilities in the same situation and laughing at how they react. I can just imagine the headlines: “It’s Rough Brown Bread for Dinner Again, and Laura Can’t. Even.” Or “Mary Loses Left Leg to Frostbite: Still Learns Her Bible Verse.” Or even, “Settler Concludes People Shouldn’t Live Where Your Family Gets Buried by 30 Feet of Snow.”

Honestly, though, that kind of irony feels wrong and tired here. Wilder doesn’t deserve it because she isn’t sugar-coating things. She’s writing for children, in the first place, but in the second place her heroine doesn’t expect differently—like, say, we do. Hard work, hunger, freezing cold, little leisure, frequent brushes with death—they are realities to deal with, not to resist and complain about.

Perhaps this is all to say that reading these books puts me in touch with how entitled a culture we really are, and how much of that I’ve absorbed despite myself. It’s difficult to have perspective when so many things are so affordable, accessible, and immediate.

I’ve felt a kind of recalibration while reading the Laura books. I see the value of self-reliance, but also the importance of real community, folks who try to do right by one another and help each other out. Whether you live in dirt or a steel skyscraper, our lives are supported not by digital signals, but by human activity.

It’s obvious, when you think about it, but just like we had to go to South Dakota to see those stars, sometimes you have to travel to someone else’s world to see what’s always been there.

Image above by A. Noldent, used by permission with a Creative Commons license.