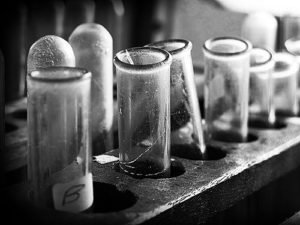 I’ve always promised myself I wouldn’t work with anything living, a prohibition I applied first when, in high school, I job-shadowed a pathologist and fainted when watching a lung biopsy, fainted when seeing the wall of stored blood, fainted ad infinitum into the twenty-first century.

I couldn’t deal with watching pain, and I hadn’t considered that pathologists work not only with the dead, but with the suffering living, and with blood that is distinctly never where it ought to be. I’ve studied viruses for the past ten or so years, happy to research things that appear alive, yet are simply energized bits of rogue genetic material.

But for the past several months, I’ve been working on a new project, one that focuses on drug-resistant bacterial and fungal infections, and I can’t ignore the new relationships I have with living microbes that, like all of nature, can’t be characterized as good or bad. On the one hand, resistant strains are responsible for 23,000 deaths each year in the US, per the Center for Disease Control, yet their kin also let us digest our food and, back in the day, led to the emergence of an oxygenated atmosphere and all multicellular life.

On Twitter, microbiologists and infectious disease researchers write descriptions like “microbial supremacist” and “poop lover” in their bios. And I’m there with them, a bit more hesitant to declare my loves, but still delighting in the worlds inside us that we denigrate as “waste” and “other.”

It’s almost impossible not to love a being once you’ve spent time with it, seen how it survives, how it helps others like itself to survive and grow, how it can remain a step ahead of humanity because it knows us inside and out.

While my day job and my writing inform each other, I’m chastised for this microbial love occasionally in my writing, usually in faith-based venues. I get comments like, “But what about the suffering?” and, “You have to consider the pain these things cause.” I think about why this is so, about why Christians tend to be hyper-aware in considering the suffering in all things. And, I think a lot about whether or not something is wrong with me—if I have a hint of the sociopath hiding in my brain.

But I can have more than one aspect of my personality (as if anyone has a choice about that): I can love what I love and hold the suffering it causes simultaneously. I find that if I don’t love as well as hold space for the pain something can wreak, things can turn monstrous.

Here is something that has been front and center in my brain (and in my gut) for the past few weeks. While looking through an old scientific journal, I came across an odd twin: a boy, four-and-a-half years old, with Haemophilus influenzae and fulminant bacterial meningitis leading to coma. He was exactly like me in age at the onset of illness; each of us sickened only a few years before the vaccine was introduced. His brain died, its electrical activity snuffed out as his heart continued to beat; my brain lived, though who can say what it once was, what slices of death it harbors now?

The case study was about the autopsy, and not so much about the process of keeping the boy in a semblance of life for twenty years. I use the word semblance with reverence or with a sneer, whichever you prefer. I believe life is sacred, but I also believe that sacred things can be horrible, in the literal horror-imbued sense of that word.

What I am trying to say is: the dura was firm and pocked as pumice, the brain encased in a hard orange shell, its inside matter yellow and calcified in sheets and hardened masses and hollows. It did not look like a brain at all.

And you may be thinking, well, Natalie, the human brain is never a box of kittens. I acknowledge this and all the unsettledness that comes with even the most timid assertion that the body should be anything. It is not my assertion. I’m trying to tussle with this brain that could easily have been mine, with this family’s hope for life and the miracle of his continued existence that became something dreadful, with all the non-dreadful and beautiful things I’m failing to see.

I love the insides of things. I love what things are. I love the enoughness of brain, heart, spleen, how looking closely at things tells you why they’re worth saving. But I believe that salvation is rare, that miracles are often only wonderful if you don’t ask too many questions; that the hope for miracles can quickly tip over into monstrosity.

As a researcher of infections, I’m trying to figure out what it means to care deeply about living beings.

A few weeks ago, I posted some research about drug-resistant Shigella infections in men who have sex with men—the point of the research being that physicians should be aware of prescribing a treatment that is unlikely to work. Within hours, my post was shared by people whose bios consist solely of quotes from the Book of Revelation—their point being that bodies exist in hierarchies of filth.

I’m trying to figure out what makes me sadder: this use of microbial information to stir hate and disgust, or the history of hate and disgust stirred by the history of my own field, with its ideas of what bodies should be, its annihilations and eugenics of people of color, the neurodiverse, and people with disabilities that have remained woven throughout all research in some form, its shaming of the microbes that spread when and how people touch, its shaming of touch, its shaming of girls and women and gay men especially.

Atonement in medical research doesn’t mean you forget the past or how it seeps in to the present; atonement is getting on your hands and knees and scrubbing the damn floor, knowing you’ll never get it clean.

About ten years ago, I was in Hiroshima, and I understood for the first time what it was like to have someone look at my face (my jeans, my purple Chucks, my Midwestern American-ness) and see hell. I understood that responsibility doesn’t die with the responsible ones, but I’ve never understood how to fix it, how to scrub the hell away.

And maybe you never get rid of it. Maybe you just carry it around with all the damn beauty and the pain and the living microbial multiverse of your body, and you sense yourself growing a touch Manichean—with God and the devil curled up together to fight the sociopath as you find yourself acclimating to the world of the living.

Image above by Law En Lerk, used by permission with a Creative Commons license.