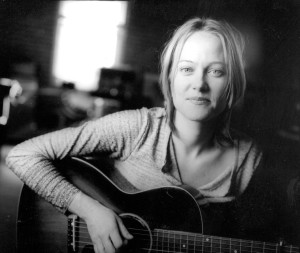 Mary Kenagy Mitchell for Image: You’ve written in our new issue about balancing songwriting with being a mother. What does your son think of your music? Does he come hear you play?

Claire Holley: Well, his preferences seem to change a lot. When he was one or two years old, his gut reactions to songs were helpful to me: he might fall asleep, smile big, become animated, or he might be uninterested or fidgety. This last response might tell me that a song wasn’t as strong. I seem to remember one time he heard my song, “Wedding Day” and looked out the window reflectively, then asked to hear it again. But it’s risky, I suppose, to trust someone under five about all your material.

I resisted playing ‘kids songs’ for my son as long as possible, and it worked for a while. “San Juan” from Daniel Lanois’s album Shine was a favorite and could soothe him. Sometimes we’d listen to that song seven times in a row. Now, though, at nearly four, he’s discovered “B-I-N-G-O” and “Old MacDonald,” and while I think he likes my voice and on some level likes my songs, I cannot always compete with the peppy sing-a-long songs.

He used to come hear me play when he was smaller and not so mobile. I remember playing a gig in San Francisco when he was five months old and my husband would carry him around in the back. That was really nice because he was absorbing the music and seemed to enjoy it. Now he either wants me off the stage and paying attention to him or he wants to be on stage himself with all the fun gear. I think he particularly likes the drums.

Image: Your new album, Hush, has several songs that sound like they might be traditionals, but are also unmistakably your own. How do you maintain your own sound?

CH: I really don’t know. I think it’s best not to be too self-conscious of one’s own sound or style. I tend to squirm when an interviewer asks, “How do you classify your music?” At the same time, at some point it is helpful to know what you’re about. With the songs on Hush, I was conscious of trying to let myself be me as much as possible. If it sounded mellow or quiet or not commercial, so be it. One of my trusted listeners kept saying, “If you do the thing that you find most inspiring, if you are transparent, it will speak to people.”

One thing that I am more aware of now than I used to be, is how my music is roots-based. I used to think of myself as a very white-bread straight-laced singer (and to some extent I am), but I now hear how a blues singer like Mississippi John Hurt affects the way I write. And I’m glad about that! If I want to evolve and grow as a musician and stay interesting to myself (and to others) then listening and discovering other players and singers is an essential part of that. When I listen to Feist or M. Ward or The Carter family, I’m not thinking, “Okay now I need to write a song like that.” What I hope is that I will absorb their sound and be changed by it, mix it around with what’s inside of me and come out with something “unmistakably my own.”

Image: Your songs demonstrate the aesthetic value of simplicity and restraint—by not trying to do too much, they do more. Is that something you’re conscious of when you’re writing and playing music?

CH: I don’t know if I’m conscious of it when I’m writing or singing the music, but I am conscious of it when I hear it in other people’s songs. When I hear “Somewhere over the Rainbow” (particularly Judy Garland’s version) I am aware of how that tune has been speaking to people for decades. How does the writer do that? And how does Garland sing it so convincingly? It’s like watching Venus Williams hit the tennis ball. She makes it look so easy! When those kinds of songs do come, it seems that they find me, and not the other way around. My job is to be listening, to pay attention so that when they do come, I have carved out enough time and space in my life to get them down and see them through.

I think when I’m recording is when I’m really conscious of trying to achieve the simplicity and restraint. You can kill a song by adding a lot of instruments or by putting it under the studio magnifying glass too much. We tried an up-tempo version of “Under the Moon” because I was convinced that this was my Everly Brothers catchy tune. It wasn’t until I put the pick down and started singing and playing it more plaintively that we found where it needed to go. Sometimes it’s just by trial and error that you eventually find what the song needs.

Image: The last ten years have seen a surge of interest in roots, folk, and traditional music, with instruments like the banjo and mandolin and subjects like heaven and hell coming into vogue—and not always in the genres or age groups or regions where you’d expect. Is it something in the air? Some kind of national hunger?

CH: I don’t know if I’m in a position to answer that question because I don’t go to a lot of folk music festivals. Just yesterday, though, I saw a friend who goes to MerleFest in Wilkesboro, North Carolina, every year. Based on what she was saying about attendance (grown roughly from one thousand to one hundred thousand in the last decade) it would seem that you are right. I think it has become vogue and hip to listen to an old timer strum a banjo. I attribute a lot of this to the popularity of records that T-Bone Burnett is behind, like Gillian Welch’sRevival or the Oh, Brother Where Art Thou soundtrack or the new Allison Krauss/Robert Plant collaboration Raising Sand.

Burnett seems to have an uncanny sense of how to make something work musically—and perhaps he knows what will work commercially, as well. Or maybe we were just ready for it, hungering for that authenticity. Maybe we have become too removed from the essence or the source of where songwriting and playing music came from: hills, porches, cotton fields, mines, baby cribs, churches. Mostly, we hear slick productions of songs on radio and television and film that have been recorded in expensive studios. It reminds me of the way that we never see animals slaughtered any more on a farm, we just see a variety of meats covered in plastic at the grocery store.

Image: You’ve recorded a number hymns and gospel songs. What kinds of music do you like to hear in church when you’re in the pews?

CH: Typically, I like a more traditional approach to sacred music—with a choir accompanied by an organ, rather than a contemporary praise band. It’s funny, though, when I’m asked to sing in churches I almost always have the house band accompany me, and I usually have a really good time. I’ve heard some great players in that context.

I enjoy when a church incorporates the old hymns, not just because they are old; I think a lot of those tunes are easier to remember and more melodic than some of the stuff being written today. I love when a choir will try something that sounds dark (and difficult!)—maybe something by Benjamin Britten or Arvo Pärt. I also really enjoy hearing a small-town country church congregation sing old Baptist hymns, and it doesn’t bother me if they’re a little out of tune. That seems to go along with the authenticity of it, that and the pump organ.

When I was pregnant with Jack and we’d just moved to Los Angeles, I’d visit this African-American church called West Angeles Church of God in Christ. It was a huge church with one of the best bands I’ve ever heard in my life. When the preacher would get going at the end of his sermon and his preaching would literally turn into singing, the band would slowly creep back up to their positions and start improvising based on what the preacher was doing and singing. Their ability to move with the spirit was incredible!

Image: What’s the advice you most often want to give young songwriters?

CH: Set aside some time a few days a week for showing up to the writing table. Try to establish a habit of working and creating so it doesn’t just feel like something you do on a whim or after a burst of inspiration. Whims and bursts of inspiration are nice and important to have sometimes, but they come and go, and there has to be something that plods on through when the inspiration leaves.

Let your songwriting go hand in hand with performing. Play out at venues as much as possible, whether it’s an open mike or something bigger. Even if you’re playing for seven people, that helps season you and build up the muscles you will need over the long haul. Have a 4-track or something to record demos on so that you can listen more objectively at a later time. When you are stumped, have a few trusted people listen to your songs and give you feedback. But be careful who you choose.

Be happy and savor it when you write a song that you are excited about. If you find yourself wanting to sing it over and over, do it. I think that’s a good sign and that you’re on the right track. But be humble, too.