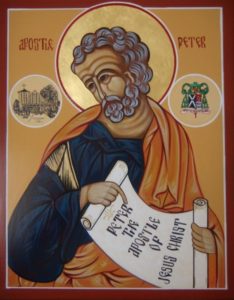 “A world created out of silence gives itself over to prayer.” I’m listening to local painter Debra Korluka discuss her work: the icons she’s painted since she was a child studying in the Ukrainian Orthodox church. I’m interested in the symbolism of an icon’s composition and in the paints—their colors, chemistry, poisons, and history. All the hidden things that, like the completed icon, promise travel from invisibility to visibility; what is seen depends on where the journeying paths of the viewer and the art meet.

What I’m drawn to most is Korluka’s devotion, her belief not only that she’s found meaningful work, but that she’s decided to give herself to it completely. She doesn’t say this, but it comes through entirely. I’m entranced by this way of finding vocation, of not considering too deeply what makes one happy or fulfilled, but building meaning and purpose through devotion.

When I first started painting, it was in response to watching people as they painted, both in person and on documentaries. The hypnotism of careful and elegant brushstrokes, hand and eye in total service. I watched videos of Shahzia Sikander, who paints miniatures in the Indo-Persian tradition. One of her paintings could take years to complete. She paints tiny lines, the centuries of rules and traditions guiding her hand as her dedication brought her welcome into a lineage, a family created by time and gaze.

I’m not a good painter. I’m no Shahzia anyway; I didn’t go to miniature-painting school in Lahore, and my eyes burn and tear into my paints within an hour. But I’m obsessed with using paint and ink as a way to have devotion in my life. As someone who often has trouble praying or remembering that God is present, I’ve really come to fancy idols. I don’t have idols “before” God; they’re more just “in front of,” and they’re permeable.

Or maybe I think I know how to bribe. After the Boston Marathon bombing, I drew hearts and feet over and over for hours each night. I figured that if I could draw something in its complexity, if I could devote my hand and eye to it, I would fall in love with it, and, in turn, God would keep it from flying apart. It’s an old-school Christian fallacy: Salvation will happen if I can do enough good things, if I can prove my love.

I’ve always thought that if I ever have a child, I’ll first make sure that I’ve fallen in love with everything (literally), even the awful things, so that I don’t fill the child’s days with fear of the whole world. I think of God as a child, perhaps, one with a troubled or overwhelmed memory who needs a reminder of what he loves. Sometimes there’s nothing more defiant than a paintbrush or a pen, especially when you use it not to defy, but to fiercely love what is falling apart.

When my grandmother died of ovarian cancer, I drew the ovaries of ants over and over, because ants terrify me and I wish my terror dead, because ant ovaries are beautiful and tendriled, because I was sad about my family and about the ways in which women’s (and ants’) bodies are hated. Now, when an ant wanders inside, I don’t kill her and then shake for hours. Instead I put her in a Mason jar and look at her, imagining her octopus-looking insides, then I place her outside. I can be salvation too, I pray. There’s too much killing, I pray. Give me a distraction; make me not monstrous, I pray.

When the icon is started, it engages a sacred argument, Korluka says, and my ears perk up. I don’t know what a sacred argument is, but I already know that I’d like one. The argument is all about connection: ensuring that the icon is a symbol of the artist’s dedication while still making it accessible to other people’s carried meanings, to their wishes to use it for prayer and their own hearts’ devotion.

Icons are flat without shading, linear without much curvature. The geometry ensures that lines are elegantly connected; grace becomes so easy that it’s as much a presence as the holy face. The flatness invites the viewer in to become the third dimension, to become part of art that meets an open heart rather than traveling away to an illusion of depth.

Art often seems useless, especially in the way that I approach it: repetitive, compulsive, images acquiring meaning in aggregate. But I think many of us have lost sight of the fact that we hold the people we care about in our hearts all the time, and everything we do with purpose and with devotion is for them. We can’t buy salvation with works, but I think we can create it, little by little, by whatever works purge the fear and stay the monstrous hand.

Korluka says her icons are “given, not created.” A painting is an icon so long as it comes from the heart and is done with genuine purpose, Korluka says. I wonder if my ant ovaries can be an icon. I think so; please don’t send a disagreeing priest.

Faith isn’t stalwart, or at least, mine isn’t. It’s created over and over, by what I discover through the places I direct my gaze and my sacred arguments. And perhaps faith isn’t created, so much as given freely, in the opportunities we have to notice and distract our hands from harm, acting as if our job is to make God remember what he loves.