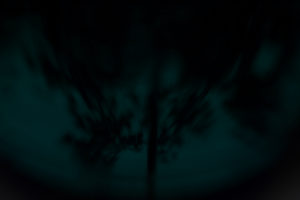 The light on the ceiling of our bedroom is slanted in a parody of the open doorway, letting in the blue glow of a nightlight from the hall. This nightly and usually innocuous shape hides something in the darkness tonight; I see it creeping in the light box, plotting something against me, about to attack.

Nightmares, night paralysis, and obsessive fears are not new to me. They have been part of my life since I was three and my mom took me to a psychologist because I wouldn’t leave her side, not even to go to the bathroom at home.

When I was eight and still unwilling to let my mom leave me alone in my room at bedtime, my mom, in an act of desperation, performed a sort of exorcism on the closet door that held the faces of dark monsters and demons in the grains of wood.

In order to fend off those terrors of demons and monsters in my late teens and twenties, I took comfort in a less mysterious Christianity. I went to grad school, I studied theology, I became skeptical of great religious emotion. I thought I could plaster away my sensitivities and obsessive thoughts behind a wall of intellectual belief. And it worked for a while.

But my pretense of intellectual faith and skepticism of religious experience didn’t last.

In his podcast, The Liturgists, Mike McHargue (aka “Science Mike”) talks about what scientists have learned from studying the brains of skeptics and believers. He says that, “Skepticism actually works on the brain to take away your ability to experience God.” In Mike’s case, when he lost his faith and became a staunch atheist, his brain networks began to “favor skepticism.”

Though I was never an atheist, my intellectualized faith was a sort of skepticism that didn’t allow for any unexplainable encounters with God. I guess you could say that I was training my brain to be skeptical. In my thirties, however, with the challenges and bodily changes of motherhood, the stresses of life in community, and the onslaught of anxiety and depression, the plaster began to crumble, chunks of it littering the floor. Something out of my control began to climb out from behind the wall.

Richard Rohr would say that suffering and great love are catalysts for transformation. Although I hesitate to say that I’ve suffered compared to so many, I think what Rohr means is that the experiences that break us apart are the ones that have the potential to really open us up to our true selves. If we latch onto to them and commit to spiritual practices, these experiences and disciplines can literally rewire our brains toward an openness to God.

Something happened to Science Mike, too. Perhaps he would’ve continued to be a skeptic if not for an experience that blew his brain networks apart: a mystical encounter with Jesus that couldn’t be explained away and that led him back to a mysterious and open view of God.

My younger self would’ve been skeptical of Mike’s mystical experience. But these transformative experiences have actually led me to the Christian mystics themselves.

For some mystics, like Catherine of Siena, the closeness to the spiritual world was likely a sensitivity that she developed as a child. When she was six, she had her first vision of Christ. Throughout her life she saw both the things of God as well as unpleasant and terrifying voices and visions.

Sometimes I wonder if I was born more sensitive to the parting of the veil. Was that scared little child who didn’t want to sleep alone really experiencing something supernatural?

Are my night visions, as an adult, a product of a nearly forty-year-old brain bathed in hormones, working out her fears in the nighttime? Or are they visions—both nightmarish and often innocuous—from the yawning of a mind more attuned to encounters with God, tapping into what my younger self was trying to escape?

I am not looking for terror but sometimes the terror finds me. This horrible creature creeping into the light box in my bedroom finally overtakes my husband who then begins to attack me in its stead.

I try fighting him off.

“What are you doing?” my husband cries. “Honey, calm down.”

It’s not that I suddenly wake from a deep sleep at that moment. In a sense, I am cognizant the whole time. Instead, I realize that I was fending off my sleeping husband and now we are both awake. He calmly reassures me as I shake out the veil, watching reality shift back to its usual place.

Strangely enough, I don’t feel any sense of dread. The shifting glow from the children’s fishbowl nightlight in the hall waxes and wanes like an LED moon, rising and falling in rhythm with my breath as I return to sleep.

Christiana N. Peterson lives with her family in intentional community in the rural Midwest. Her forthcoming book with Herald Press is about the Christian mystics and life in community. You can find more of Christiana’s writing on her blog at christiananpeterson.com and follow her on twitter.

The above image is by Jim Lukach and is used by permission under a Creative Commons license.