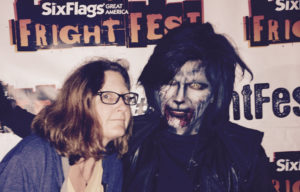 Halloween costumes and decorations. If I’m a vampire, Pinterest is my garlic. Not only do I cut and paste at a first-grade level but tolerate little more than a basic jack-o-lantern or paper bat in my house.

But come September, neighborhood front yards become graveyards. Styrofoam headstones with epitaphs like “I.M. Dead” and “Bone Voyage” litter the leaf-strewn lawns. In the more high-achieving displays, bony hands, and sometimes even bright rubber intestines, work their way out of the soil.

Your more conservative Christian is often exhorted to avoid this kind of thing. Churches replace Halloween parties with “harvest festivals.” Some parents even forbid their kids from wearing costumes or trick-or-treating. I’m far from fundamentalist, but I tire of the two-month long (if you go by Wal-Mart’s shelves) celebration of death and decay. Last year I had to drive by all that tacky gore while my good friend was withering away to cancer. I resented the daily, macabre assault.

But there’s something different about Fright Fest at Six Flags Great America, the amusement park fifteen minutes from my home. Yes, the decorations push the icky limits, but the “scare-actors”–the zombies, clowns, and werewolves who roam the park from 6 p.m. to closing—have lurched their way into my heart.

According to a man named Gary, a veteran haunted house worker I met while waiting in line for a $14 spinach wrap, hopeful monsters audition in February for the fall. It’s a significant commitment, involving twenty-one full days of makeup, costumes, parading, dancing, and staying in character no matter the weather or visitors’ reactions.

Each evening at 5:45, after parading through the main square during the nightly “Uprising,” the scare-actors are released into their respective “Scare Zones”: clowns in Slasher Circus, slain Mardi Gras revelers at the Massacre Ball, chainsaw-wielding lumberjacks in the Forbidden Forest, and so on. At that point, their job is to frighten the visitors who roam in giggling, mostly teenaged, packs.

Our three kids love it. My thirteen-year-old screams extravagantly whenever a gas-masked fiend jumps out from the toxic waste barrels in the Aftermath zone. My eight-year-old still talks about the werewolf who snorted at his funnel cake. My middle child, now eleven, used to refuse Fright Fest altogether. But this past week, emboldened, she faced off with a roaring clown.

She shrieked. The clown lunged. She shrieked again, then laughed. Now she says she enjoys Fright Fest.

But what does it feel like to be on the other side, to sign a contract to make people holler and run? What if a child cries and you can’t apologize? If perfect love casts out fear, what’s the point of any of this?

I had to ask some former scare-actors to find out.

Jerry, the twenty-three-year-old son of one of my friends, worked as a pasty-faced, black-suited zombie in 2011. His main station was a haunted house, Mausoleum of Terror, where he jumped out of coffins, wielded chainsaws, and pushed hanging body bags toward terrified guests. Like all Fright Fest scare-actors, he was required to stay in character, even on his way to eat in the employee lunchroom, until physically out of sight.

Matilda (her scare-actor name), my friend’s twenty-six-year-old cousin, worked Fright Fest in 2010 and 2011 as a contortionist clown in Slasher Circus, the one area she says many guests actively go out of their way to avoid. In 2012, she played the part of an insane asylum patient in a haunted house.

I asked both of them: What was it like to be on the other side of fear? And why do people pay to be afraid?

Jerry said it was all about adrenalin. Some people can’t resist the rush, but those chemicals can also make them do strange things. He recalled one visitor who, citing the well-known scare-actor rule of keeping one’s hands to oneself, walked through the entire haunted house shouting at the zombies, “‘You can’t touch me!’” It’s almost like he was reassuring himself of his safety, Jerry said, by getting in their faces and repeating the incantation.

“But all the screaming was music to our ears,” Jerry said. “I remember counting how many people peed their pants while in the haunted house.”

“How did that make you feel?” I asked.

He pumped his fist: “Success!”

Sometimes, though, Jerry noticed—too late—that someone was crying. “That’s when I wondered if I was too hard on them.”

Matilda, too, found herself in some uncomfortable situations. She recalls some irresponsible parents leaving a little boy alone (the haunted houses are not recommended for children under twelve) as she contorted down the hallway growling the Lord’s Prayer in Ukrainian. The boy froze, stared, then burst into tears. Coming to the aid of the little boy, Matilda pretended to be scared herself and hid behind a wall to let him escape. To her horror, the boy was still there after a few minutes, made eye contact again, and wailed.

Matilda also had to learn how to stand her ground against aggression and even sexual harassment, all while staying in character. But she goes on the record saying that 90% of the interactions were positive, if not satisfying:

There’s nothing like seeing grown men tripping over themselves trying to get away from you. Highest compliment I ever received was one time when I immediately dropped into a backbend and started scurrying towards a group of people–someone in the crowd shouted, “Oh hell no, that shit ain’t fake!” In real life, I am petite and probably the least scariest person ever, so to have people react like that is super fun.

That’s what I’ve found in Fright Fest—the intimacy of scaring and being scared, the power of making a stranger jump and yelp, even lose bodily function (it hasn’t happened to me yet) in one of the few places where we can set aside superficial differences and run around like the free amygdalas we are. With the prefrontal reminder that we’re in a relatively controlled environment, not an abusive situation or war-torn country, we can exercise these primal emotions in safety.

At a time when our country’s being torn apart by a contentious election, racial tensions, and other social maladies, there’s comfort in coming together to share a response, even if that response is to a fear-mongering demon with a half-sunken face. As we scream, we connect, melting to the core of our real selves. Fright Fest is not a macabre reminder of death but a reminder of what we have in common—the giggles and screams that make us alive and awake to the world. It might be a Halloween miracle.