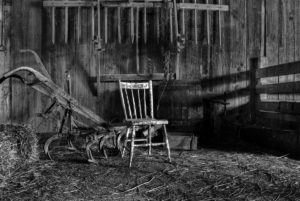 When I read Austin Segrest’s “Plowboy’s Bible,” I began to realize that the entire poem was made up of nothing more than a series of phrases. The phrases veered wildly between images and concepts that were relatively intelligible to exotic, almost surreal metaphors. Slowly it dawned on me that I had read a poem like this before. Certain words and rhythms in Segrest’s poem triggered my memory and I suddenly realized that this was an homage/adaptation of the Metaphysical poet George Herbert’s famous sonnet “Prayer.” In Herbert’s poem the basic conceit is that it is almost impossible to truly define prayer. So the poet strives to draw us in to the mystery using both clarity and more oblique methods. He places a phrase like “heart in pilgrimage” next to something strange, like “angels age” or “engine against th’Almighty” (i.e., like a siege-engine or catapult for bombarding a city). “Plowboy’s Bible” is both an homage and a parallel: it takes on the mystery of scripture. In Segrest’s poem the holy text is “a pig-chewed engine of splendor and dispute” but also “fishy contraband, rendered law.” I took the liberty of asking the poet about the origin of the poem and he spoke of researching his Puritan forebears. It was William Tyndale, one of the first translators of the Bible into English, who once told a priest: “I will cause the boy that driveth the plow to know more of the Scriptures than thou dost!” So we have the paradox of scripture which is now in our own tongue but yet remains opaque and controversial in many ways. And in the process of suggesting all this, Segrest has offered a salute to one of the great Christian poets in our tradition.