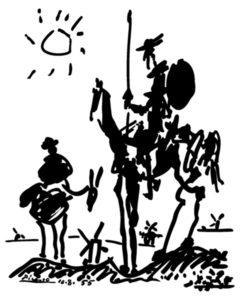 We are entering a season of thanksgiving, and soon we’ll begin a season of reflection as we prepare to celebrate a remarkable birth that changed human history.

I begin with thanksgiving. On behalf of all the staff at Image, thank you. Thank you for being part of our community. Thank you for your subscriptions and financial support. Thank you for receiving this letter with grace, knowing that we, as so many charities do this time of year, will be asking for your support to launch us into 2017. Thank you!

2016 has been a helluva year—about that I think we can all agree. With the presidential campaign behind us, calls for unity and healing seem more impossible than ever. We remain shaken by the coarsening of public discourse and the lingering fear and anger that threaten to divide us into warring tribes.

But grace and hope can still be found.

Late in the campaign, when it seemed that things couldn’t possibly get worse, I found both in an unlikely place: the pages of Don Quixote.

I read the book because I never had—and I felt guilty about the omission. I knew it was hilarious and poignant but I wasn’t prepared for how directly it spoke to my own sense of vocation.

Everyone knows the plot but few of us know the deeper meaning of Don Quixote. True, it’s about a middle-aged man who has become so obsessed by old-fashioned tales of chivalry that he sets off to be a knight errant. True, he’s deluded and tilts at windmills, thinking they are giants. True, he is constantly humiliated by his misadventures and refuses to heed the worldly wisdom of his peasant-squire Sancho Panza.

But here’s the thing. Foolish as the Knight of the Woeful Countenance may be, you can’t help but notice that his intentions are pure—and that for all his misperceptions he sees a world more full of wonder, beauty, and adventure than the pragmatic and literal-minded folk he encounters.

In the end, it’s hard not to see oneself in Don Quixote. I can’t tell you the number of times I’ve been told that trying to publish a literary quarterly like Image is “quixotic.” Literary journals, I’ve been assured, are as out of date as knight errantry.

Then there are also those who see Image’s “Big Tent” philosophy—publishing art and literature from all three western faith traditions and without a political agenda to push—as hopelessly naïve.

These so-called realists tell us that our refusal to shrink the tent—to make ourselves the property of one team or another—will doom our efforts.

In my darkest moments, I’m tempted to give in to these voices. But then something stirs inside me and rebels. My heart tells me to emulate Don Quixote: find a skinny old nag, a broken lance, and a barber’s basin for a helmet and launch out into a world of wonders.

Because I desperately want to keep publishing wonders like these in the pages of Image:

♦   Poet Susan Miller asks us to imagine the inner life of the monstrous medieval Wolf of Gubbio, who was made gentle by the simple kindness of a saint. “Would you call it a miracle,” she asks, “if you knew that wherever you went, someone provided for you?”

♦   Marilyn Nelson’s image of neighbors in Lyme, Connecticut, in 1815, black and white, desperately laboring together to put out a lightning-fire in their church meeting house, home to a venerable community institution that is flawed but still deeply valuable:

Sometimes fingers touched, passing a bucket,
and, looking out of a pale or dark face,
desperate eyes looked into desperate eyes
and saw through their clarity all the way
to the bottom, where they read their own prayer.

♦   Leading Syrian poet Adonis meditates on the tragic history of Jerusalem—in language that could also apply to the American political landscape:

I ask you, Book of Job,
how can a person build a bridge between two sides
when he sees only one of them?

If you’re reading this letter, you know what I mean about being able to see more in reality than meets the eye. That’s what art and faith make possible—and what’s behind all true efforts for the common good. The good often requires sacrificial acts that aren’t based on rational calculation but on love for what is true, good, and beautiful.

For Image to continue questing—and impacting both the religious community and the broader culture—we need to gather in force under the fluttering banners of Don Quixote. Otherwise, the forces that would reduce this world to mere utility, power, and self-interest will win the day.

You can make this happen. The seeming “madness” of your charity is what enables Image to continue.

Our goal this year is $170,000. This is a windmill that we can take down…together! Don your armor and mount up!

Thank you for your support, friends, now and always.

Yours for adventure,
Gregory Wolfe

Gregory Wolfe is the founder and editor of Image.