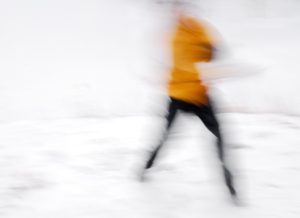 I was born with a certain level of anxiety in my blood—an electric edge that keeps me vigilant, wise, creative, and, arguably, a little humorous at times. As a child, I funneled much of my worst-case-scenario thinking into colorful stories that helped me face pain and fear head-on while developing an imagination that would shape the rest of my life. My propensity toward uptight, Type-A thinking has helped me keep a relatively organized house and healthy to-do list, and I like it that way. In short, my dysfunction often serves me well.

But the dark side has its dark side.

I used to fear swimming. Flying. Driving on mountain roads. During college in southern California, I became so petrified of the impending Big One that I ended up in the ER one night, glassy-eyed and clinging to chairs, unable to contain my panic. Once the stress of school hit me so hard, I screamed and threw books at my computer, my stunned roommate perched frozen on her bed.

I used to carry so much terror in my body that all I knew to do was tear it apart, namely the protection over my eyes.

Starting some time during my junior year of high school, when I saw myself stuck in a volatile state—both my emotionally violent household and my own literal, burning and shaking state of California—I began pulling out my eyelashes. It started when I got something in my eye and gave my lid a little tug. To my wonder, about five or six lashes fell out, sprinkling my math book.

Satisfied with the thin black smiles on the page, I tugged at my eyelid again. This time, I looked between my forefinger and thumb to find a little bouquet of a half-dozen more lashes. Their white roots gleamed atop the black mascara-ed tips.

In the next day or two, I entertained myself by seeing how many lashes I could pull out in one shot. It never hurt but rather gratified me, the nonstop stream of slick black lashes on my papers and books. Never a good doodler, I had found something to do with my hands that absorbed my obsessive energy.

And no one seemed to notice. Until they did.

“Why are you doing that to your eyes?” a classmate asked. “That’s kinda gross.”

I shrugged and looked down at my copy of The Scarlet Letter, which had started to swallow several lashes between its pages. I quickly swept them out of the book and tried to sit on my hands the rest of the period.

But it didn’t take long before I started pulling again, sometimes for what seemed like hours at a time while I listened to Revolver in my room. I stopped wearing mascara to make the process cleaner.

Before long, I had trouble getting the numbers I liked. Sometimes I tugged and nothing came out at all. At that point I stood in front of the mirror for a full minute and for the first time since starting my hobby, looked at my eyes.

There were barely any lashes left.

The fleshy, pink ridges of my lids were fully exposed, tufted with just a stray lash or two. Panicked, I tried to apply mascara, which just smeared across my lids and made me look even more freakish.

When you catch yourself aware of an acute mental deficiency, you can easily tailspin into terror, and that was what was happened to me. Already challenged with getting dates, I had now added another deficiency to my list: tall, flat-chested, lashless. But this last one, I brought on myself, which made me hate myself even more.

My high school years were pre- Internet, but somehow I got my hands on a magazine that explained there was a name for my obsession: trichotillomania.

Trichotillomania describes any disorder of hair pulling, including hair on the head (the most common manifestation), pubic area, eyebrows, or lashes. It tends to start showing up in adolescence, has no clear cause or cure, and can come and go throughout one’s life. Not surprisingly, it often runs alongside obsessive-compulsive disorder and anxiety.

My mother had told me to stopped pulling out my lashes several times, but I don’t think she realized how serious the problem had become. I showed her the magazine article and asked if she could make me an appointment.

It was embarrassing hearing my mother call the doctor’s office and explain I’d been pulling out my eyelashes. There were many shameful pauses during the conversation, probably indicating that the receptionist had never heard of such a crazy thing, and were we sure we needed a doctor for this?

But as soon as she made the appointment, something amazing happened.

I stopped pulling out my lashes.

Giving my problem a name and validating it with an article and an appointment was my first step in understanding that I lived with unique challenges. In fact, the relief in my self-diagnosis gave me the freedom to stop pulling out my lashes because I could finally put some words to my struggles.

Since I stopped pulling out my lashes, I asked my mom to cancel the appointment. That was probably a mistake, as imbalanced brain chemistry would continue to haunt (and, confusingly, delight) me until I finally sought out medical and therapeutic attention several years into adulthood.

Most of my eyelashes grew back but are permanently sparser than average as a result of my bout with trichotillomania in high school. I still go through stages of picking at split ends or toenails as a form of giving some shape to my obsessive energies. I am not completely “cured,” I guess, but I’m also not trapped by an embarrassing secret.

Every time I receive a diagnosis, whether it be for anxiety, trauma, or hormonal imbalances, I feel a bit more free, not pigeonholed. I live so much more boldly now, traveling and taking emotional risks I never would have considered even just a year ago. I rarely explode with my kids anymore, not because I’ve magically figured out parenting but because by facing even more of my weaknesses, I can figure out how to better take care of myself.

I believe in bringing dysfunction to the light. Because however disturbing or ugly it is, light’s the main part of the story.

The above image is by Craig Cloutier, used with permission under a Creative Commons license.