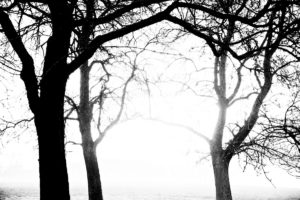 Where do our words come from? And our lives: how do they connect with those (whether persons or words) now dead but perhaps living on—in ways we can almost touch, almost speak? These are the complex questions that Margaret Gibson raises and wraps her own language around in this remarkable poem. For all their complexity, the questions are explored by Gibson in a most accessible, inviting way. Beginning with her discovery of a poem written in her youth, she moves seamlessly into the present moment via the etymologies of words. “The roots of words send out their spirits,” she writes. And those spirits draw her thought into the spirits of the dead, with whom she sits comfortably till the poem’s end—where she enters the spirit of the preposition “with” so actively that it becomes a verb.

“Poetry Is the Spirit of the Dead, Watching,” Part I, by Margaret Gibson
I.

Unpacking books, shelving them
in the library of this old house,
I come across The Duel, a chapbook
Louis Rubin made of poems I wrote
before I left school. The book—
barely worn, inscribed
to the boy who would become
my first husband—just to look at it
makes me touch my face
as if touch might summon back
the girl who, like a distant
relative, faintly
resembles me now.
I turn the pages, perusing
a line here, a line there—
stopped finally
by a title so certain, so absolute,
it takes away my breath.

Poetry Is the Spirit of the Dead, Watching

What on earth did I mean by that?
Who was I reading? Coleridge? Yeats?
The Eliot of Ash Wednesday?
Listen. A moss light
moves the tops of trees,
the hem of a garment walking
in circles; moves patiently and still….
Easter in the poem,
it was April in western Virginia
beneath Tinker Mountain
where I wrote it, the slim trees
puckering with leaves and early
blossoms, shadblow, flowering Judas.

Outside now, a slow rain curtains the house,
sifts through the cedars, beads
on the back of the doe
that crosses the grass in the dark
to eat the day lilies at the garden’s
edge. I understand her hunger.
My husband’s in bed in another room,
unwell. The fire’s made. In Old English
heorth and heorte, hearth and heart
are close.
_______Ker, ker—
I imagine the crow’s chill call.
Let it center me. Keramos.
Cremate. Potter’s clay.

The roots of words send out their spirits.

We are measured by our light,
said the hermetic and mild
beloved master of this house,
who raised it from collapse
and ruin. He didn’t get
his wish to die here,
where the gate to eternity (he felt)
swung on its hinges
open, shut, open—and is swinging
still, he’d say, as the spirits pass by,
watching.
_________Alone tonight,
I’ll sit with him, with all the spirits
who made this house, hearth, heart.
I would be with them.
_____________Withed.

Read the rest of this poem here.

Margaret Gibson is the author of eleven books of poetry and one prose memoir, most recently Broken Cup and Second Nature (both from Louisiana State). Her awards include the Lamont Selection for Poetry, the Melville Kane Award, the Connecticut Book Award in Poetry, and two Pushcarts. She has been a finalist for the National Book Award and is professor emerita of the University of Connecticut.

The above image is by Florian Schwalsberger, used with permission under a Creative Commons license.