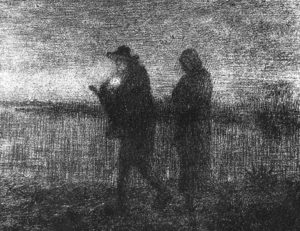 These are dark times.

Here in the northern hemisphere the sun is at its lowest point in the sky; the winter solstice is still weeks away.

I’m sitting outside on my elderly mother’s kitchen step. I’ve come to England three times this year to take care of her. I came before and after her heart operation. A few weeks after I’d been home she fell and broke her elbow and so I’m back again.

My mother does not do well in the darkness of winter; she becomes agitated and depressed.  As I look out at her garden, I see an objective correlative of her physical and mental state since the onset of her illness a year ago.

I see bare branches with a few shriveled leaves clinging to them, vibrating forlornly in the chill air sweeping south from Iceland. I see frost-burned grass and plants. The herbs I planted for her in the spring look dead.

I know that once our planet begins its ancient, slow tilt towards the sun again, all will be resurrected. I try to keep that in mind as I huddle on the steps, smoke a cigarette or two and pray for God’s mercy to my mother at the end of her life, pray that she will find peace and joy and beauty.

I pray that spring will come to a life spent mostly in deepest winter.

As I sit in the same garden I knew as a child of eight when we moved to this house, as a girl of fourteen, as a woman now in her fifth decade, I have had plenty of time to ponder the past.

The circumstances of my birth were not propitious. In fact, I suspect from what little my mother has let slip over the years, that my conception was a “mistake,” a result of my alcoholic father’s callous disregard for his wife.

I was born just a scant fourteen months after my brother and, soon after, my father disappeared from our lives. Perhaps because I reminded my mother of the dark years of her marriage, perhaps because my temperament was so unrestful for a woman bruised and battered by life, I grew up as an alien, a restless anomaly in our otherwise placid middle-class British family where what was never said was more important than what was spoken out loud.

I suppose it made me listen to the subtexts and pay attention to the silences.

I suppose it made me a writer.

Now, at the end of my mother’s life, I am needed. My mother’s physical and emotional fragility has opened up a space between us and renewed a relationship that I had feared was stillborn.

I bring her tea, fill a hot-water bottle to put along her aching hip, carry dinner to her on a tray, and the silent gratitude in her eyes comes close to unmaking me. I stand beside her in mass and help her stand, whisper to her that it is ok to sit instead of kneel. When it is time for communion, my mother does not want to go ahead of me but wants to follow me up the aisle. Sometimes I feel her put a steadying hand on my back.

When I was four, my mother slipped and fell on the ice when we were getting off a bus. She cut her head on her broken glasses, those cat-eye 1960s glasses with black, rhinestone frames. I remember her blood spreading on the ice and my horror at my mother’s mortality.

For months afterwards, my mother tells me, I clutched her tightly by the arm to steady her lest she fall. It was spring by then and there was no ice.

I am still holding her by the hand. I will never let go. I think my mother knows that now.

And so I discover a terrible beauty in the starkness of the garden, at being here now at this time, in this season. And a terrible joy. I cannot account for this paradox.

It occurs to me as I sit on these steps that the life my husband Greg and I have led for thirty-two years—the journey of our marriage, the journey of Image—has also been a paradox of heartbreak and joy.

The heartbreak of the struggle to keep Image alive, the joy we see on the faces of Glen Workshop attendees who realize, perhaps for the first time, that they are not alone in their struggle to make art—that there is a vast constellation of others in the blackness that so often shrouds this benighted world.

The Romantics had it wrong; we are not solitary stars floating in the void; we are vast arcs of light describing stories that are ever ancient, ever new.

Don’t get me wrong: I am not by nature a patient person. Ask Greg. Ask my children. But I am learning patience. Relearning what I first learned when I was expecting each of our four children, when I was raising them from infancy to adulthood.

Miracles, it seems, take time. Or, as Greg likes to say, we are all “works in progress.”

This is something Our Lady knew as she jolted uncomfortably on the back of that donkey towards Bethlehem, arriving exhausted only to be told there was no place for her to lie down and ease her aching back.

I imagine her resignation when she was forced to bed down in the straw of a stable, aware that her baby’s birth was imminent, filled with fear for him and wondering if the miracle of salvation was going to end in a stillbirth.

I see her standing at the foot of the cross watching her son die. The sun is eclipsed; all is darkness.

How on earth did she survive? This is the point where my imagination fails.

I do not have the courage of Mary. Not even close. And mercifully, I do not need it. For, unlike her, I have been given the gift of hindsight and know that her beloved son rose from the dead. I know, as she did not, that her hope was not misplaced, her waiting not in vain.

And it comes to me that this is what Advent is all about: waiting for the right time.

So I keep vigil in my mother’s garden and at her bedside. I keep vigil with Greg and Image waiting, please God, for the renewal of all things.

Contribute to the future of Image: make a donation today. You’ll make a bigger difference than you know.

Suzanne M. Wolfe grew up in Manchester, England and read English Literature at Oxford University, where she co-founded the Oxford C.S. Lewis Society. She is Writer in Residence at Seattle Pacific University and has taught literature and creative writing there since 2000. Twenty-five years ago, Suzanne and her husband, Gregory Wolfe, co-founded Image. She is the author of two novels: Unveiling (Paraclete Press 2004), and The Confessions of X (Harper Collins 2016.)

Above image:
“The Flight into Egypt” by Jean-François Millet, public domain.