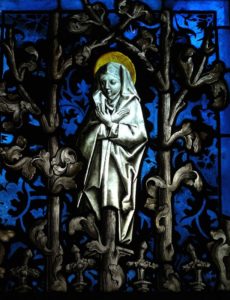 Three blue, elongated forms more shadow or specter than human, stretch from top to bottom of the canvas’s center, a red dot like a pomegranate seed midway down the third figure. They loom, yet remain autonomous and bordered. Thin gold circles intersect atop ragged hymnal pages, the ecstatic presence of God over shattered praise of him.

I love that it’s repeated, that it’s intended to form a rhythm you carry as a reminder. Apparently it’s a threat (i.e., take up arms against us, and there’ll be nothing left of you), but I’ve always considered it to be lovely advice for the all-too-common experience of occupying multiple emotional states, of both holding and fighting sadness, despair, helplessness, or rage.

I saw Minneapolis choreographer Ananya Chatterjea speak a few years ago, and a young woman in the audience asked her how women of color could have a greater say in the creation and direction of dance.

When I hear “gird yourselves” I picture Chatterjea standing up, walking to the edge of the stage, making dead-on eye contact, and saying, “Stand your ground. Grow roots from your heels, and stand your ground.”

I hear Chatterjea’s voice in my head as often as I hear Isaiah’s. In some way, I believe all people—and maybe all of everything—are lynchpins for what we love and protect. We are all meditations on the incarnation, who bear some small gift of salvation for what we hold in place.

When I’m walking through the cold, wonderful, awful city that is my home, I think of the angel in Genesis pulling Lot’s hand and saying, “unless you leave, I can do nothing. Stand your ground, Lot.”

When the angel says it can’t destroy unless you move, you grow roots from your heels. That’s the salvation we carry.

And when I hear “yet be shattered,” I think of being filled with stained glass hovering like dust motes in a sunbeam, glass more beautiful when it’s broken, like the dendrites of ice that gather on bridges and give snow its satisfying Styrofoam squeak. I think of old church-builders’ legends about colored glass being a door God uses to enter the world.

Now that my great-aunts and great-uncles have died, my family and I try to keep the old legends and traditions as best we’re able. Our Christmas is Swedish (part Sweden, part immigrant hardship, made-up language and starvation-invented food). We elongate our vowels into diphthongs. We eat herring and sylta and black coffee and bread spiced with cardamom.

We walk through the woods and pay attention to what whispers, to the mix of strength and pain given us by the cold and by our farm-girl ancestral ghosts.

We like the sad sides of stories. The parts where you have to learn to sit in the dark with no hope. The parts that both gird and shatter faith. We like “O Little Town of Bethlehem,” all minor keys, the sadness that rides along for all incarnations.

I love the serious mystery of Advent that mirrors the season, the dread that follows celebration when long dark days are no longer lit with pink lights strung over cedars and glowing menthol-blue window menorahs, the way resilience against cold and darkness wears away into the sorrow of Lent.

Physicists know that temperature alters not only mindset but physical structure as well. A cold world is different than a warm one. Molecules expand and grow languid in the summer, and my sundress-draped stride matches the lazy air.

In winter, molecules jitter away tightly, and we call it pain and shiver and bite. We watch the shadows stretch and loom, we suddenly find our apartments smelling like a loved one who’s been dead for years, we listen to the deafening silence of snowfall. We wonder year after year what strange world we’ve entered.

At the train station, three elderly Somali women without mittens share a jar of Vaseline, rubbing it into their fingers, foreheads, and anywhere the distance between skin and bone grows short. The women smell like frankincense and vetiver oils, scent heightened in the cold air. The windchill factor is -18. I wonder if they think this is hell. I wonder how their ancestors show their love for them, how they remind them to be strong. I wonder if a world, no matter its shifting brutalities, its shatterings, can ever be a hell.

The large window of the synagogue near my house faces the sidewalk and a courtyard containing the most majestic, Yggdrasil-like ash I’ve ever seen. In daylight, you might think the window is cracked in an unattractive way, but when darkness falls, it comes alive: thin pieces of red and orange stained glass thrown into a fiery whirl. The etched lines lend themselves to movement once the day grows dark.

I don’t know what the window is supposed to represent, but it looks like the painting of Shechinah—the physical manifestation of God on earth—I saw in the St. John’s Bible. A desert shrub on fire, a woman’s homesick tears, something seen from behind moving through an encampment.

The map to Shechinah is nothing but shadow until the darkness gives it shape.

The above image is by Trish Mayo, used with permission under a Creative Commons license.