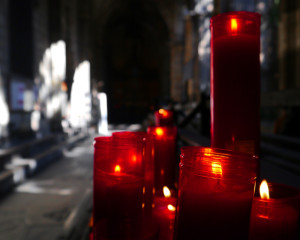 This poem moves me and impresses me with its sense of almost-but-not-quite arriving at connection. Everywhere I turn within the walls of this poem, I come face to face with human need and the world’s shortcomings in meeting that need. Mourning her mother, the speaker attempts throughout the poem to do a simple thing: light a candle. Instead, she finds herself confronted with failure and dampening hope. In the candle’s failure to light and in comparing herself to the other mourner’s open grief, the speaker sees the distance between herself and her mother, some final failure to connect or satisfy. Struggle, longing, and love are three threads tightly woven through stanzas of vivid detail and painful confession. Formally, the linked sounds, repetition, and snatches of rhythm give hints of the familiar, adding to a feeling of déjà vu that is mirrored by the narrative itself. The final stanzas push the walls of the cathedral outward, identifying this one speaker’s pain with a bigger wound shared by us all, and perhaps offering, there, the possibility of solace.

A long time spent trying, kneeling,
to light a votive for my mother
from a votive for another. Each
fire floats on shallow viscous water.
With my stick, I wet wicks, extinguishing
prayers instead of sending up mine:
I loved you every day, will. My stick
blackens, does not carry light. Evening
bells ring. The church is closing to open
later.

All the while an antsy girl clicks
her heels hard on the tiles. Her mother,
on a kneeler under a portrait of Mary,
weeps softly into her own arms. Hard
to do anything well kneeling
except wonder. Like a girl in a war
in a book, I seek some softly-lit
continuity, poach prayed-for heat,
well-turned grief, long to be near
one well-known by another.

I’m in the world, the world
my mother could not enter,
did depart. Touching my finger
to a stranger’s flame, I mean to touch
my mother. Amorphous immutable
death takes beautiful shape in a candle
flame in a cathedral. I know nothing closer
to love: this attempt to take
light’s purchase, try to apply its
breath to darkness. I’ve nearly drowned
the final light. The mother
of the busy girl, the clicker, weeps
on.

What if this is heaven?
This cathedral empty but for us, five
mothers: Mary, mine, me, her, hers.
When the guard says time to go
I stand and see in every tile
flame bright as a fresh rip.

Heather Sellers is the author of two volumes of poetry,Drinking Girls and Their Dresses(Ahsahta) and The Boys I Borrow (New Issues). She is at work on a collection of poems on the subject of her father’s death. She teaches poetry and nonfiction in the MFA program at the University of South Florida.

The above image is by Marc Cornelis, used with permission under a Creative Commons license.