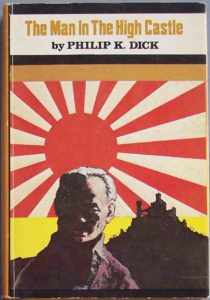 Imagine an alternate history in which a regime arose in the United States that believed in power over equality, profit over values, the privilege of the few over the good of the many, and appearance over truth.

Imagine these powers infiltrated the highest offices of our government, and that they began to institute anti-democratic policies, to undermine the system of checks and balances, to destabilize international relations, and to generally dismantle the foundations of our country while propping up their own narrow interests.

Well, maybe it’s not so hard to imagine. A year ago, it might have been. In fact, a year ago it would have sounded like the stuff of science fiction.

In fact, it already is the stuff of science fiction. Phillip K. Dick imagined a world something like this in The Man in the High Castle, an alternate history in which the Japanese and the Nazis won their wars against the U.S. and occupied portions of the west and east coasts. It’s a dark vision in which a small group of separatists resort to violence and subterfuge to try to win back our lost freedoms.

When I first read it about a year ago, it felt masochistic. Why disturb oneself by imagining this alternate history where the bad guys won? In other forms of sci-fi, we’re pretty sure the good guys will win. When it’s our own recent history, it seriously undermines one’s sense of safety and security.

Except that nowadays I find myself increasingly concerned for the safety and security of the minority members of my community. Nowadays I seriously wonder if we are witnessing the twilight of American democracy.

Nowadays PKD reads like a holy fool, babbling prophecies he himself didn’t understand.

One can be overly dramatic, of course. Democracy is not simply “gone,” as some of the rhetoric goes, but we’ve yet to see if our politicians have the integrity to preserve it when the pressure comes.

PKD’s disturbing conceit, though, is that there is no necessity to the good guys winning. History is not fated to go “our way.” Athens fell. Jerusalem fell. Rome fell.

All of them thought they had God, or the gods, on their side.

Most of my Christian friends are not exceptionalists. Most of them do not believe America is God’s chosen nation to save the world. And yet many of them have been in despair over American politics, our collective future, and of the state of American Christianity.

This is concerning. The job of the Christian, to my mind, is to refuse to despair. That’s faith.

The job of the Christian is to shine a light in the darkness because we believe the darkness has not and will not overcome it. That’s hope.

The job of the Christian is to see the good where others see only perversity, ignorance, malice, and greed. That’s love.

And the job of the artist?

If you’re watching the Amazon adaptation of High Castle, you would never know that the novel doesn’t oppose guerilla violence to state violence. Rather, against the attempts to exert control over every element of people’s lives by both the Imperial Japanese and the Nazis, PKD offers the forces of religion and art.

Bet you didn’t see that coming.

The I Ching represents religion in the book. It’s a mystical tradition that employs marked bamboo sticks (similar to dice) to direct the user to a manual full of gnomic stanzas. There’s a kind of fascinating combination of math and poetry in this. The numbers combine by fate or chance to create geometric forms, which correspond to changing combinations of verses, the order of which varies the possible meanings one can infer.

Art takes the shape of original, handmade jewelry. The occupying Japanese are fascinated by historical Americana, but original work is subversive and unsettling. There is no established context for interpreting and understanding it. One has to confront it personally.

Art also takes the form of contraband films that show an alternate history in which the U.S. won the war and prospered. That is, our actual history is, in the novel, the stuff of sci-fi. If it’s a history we take for granted, in the novel it is a fiction that inspires Americans to resist oppression. In PKD’s book, fiction is more real than reality.

The point in both cases, for PKD, seems to be that the forces that really determine our lives are intangible, elusive, unpredictable, creative, and even personal. High Castle is a caution against political complacency, certainly, but it’s also a caution against depending upon the political order to make us happy.

A better future lies not with the politicians but with the artists—meaning the poets, i.e., the makers, all those who can imagine a different world and use the materials of this world to show it to everyone else.

We Christians believe the same thing. A better world doesn’t require the cynical “realism” of the politician. It requires, rather, the hard-nosed realism of Flannery O’Connor, the belief that the good, the true, and the beautiful permeate the world despite all that conspires to obscure them.

Maybe things in the next four years won’t be so bad as we progressives fear. Here’s hoping. And maybe those who resist will find ways to stand for common values and not mere alternative regimes of power. I wish I could hope more in that.

I’m trying, rather, to put my faith where I always thought it was, in an almighty God who has history in his hands even when that history doesn’t privilege me. And I’m trying to follow PKD’s lead and look to the makers to remind us of what we really value.

Lastly, I’m counting on Christian makers to keep making, which is the ultimate act of resistance, to insist on the goodness of something over nothing, of love over obliteration. After all, our model is not glorious triumph over our enemies, but singing in the ovens while the tyrant looks on and fumes.

The above image by Chris Drumm, used with permission under a Creative Commons License.