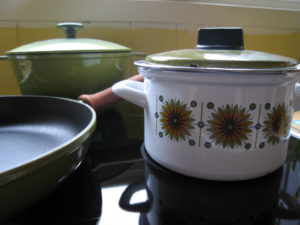 I possessed a consummate ideology before I had children. It was a perfectly distilled comprehension of man, God, and government. I knew with certainty that if everyone would just turn off the television and read Important Books, we could live alongside one another the way the Almighty intended when he crafted laws of the universe that so clearly comported with my belief system.

It was all so obvious to me, which made the fact that some people disagreed with my worldview both infuriating and validating. How do you not see the truth? How can you ignore these facts staring you in the face? How awesome am I that I have not fallen prey to the deceptions entangling you?

I was enlightened. I was chosen. Only the ignorance and avarice of my ideological enemies stood in the way. Surely God would not have gifted me with words if he didn’t want me firing them from both barrels at the enemies of peace, freedom, and progress.

Then my children arrived.

First there was just the one, which was fatiguing enough—but then came another, and another, and soon there was no political or theological conversation too sacrosanct to be interrupted by a tiny voice shouting from the bathroom: “Wipe me!” The wakefulness and the messes, the incessant need, the routine violation of privacy and stillness—they wear a body down.

I understand that parenthood is not the only path to sanctification. I’ve never had to glue buttons on cheap smartphone knock-offs in a Chinese prison labor camp, for example, but I’m sure that can also be burdensome. I hear running an orphanage in a third-world country is also trying. The point is, we all know there are life circumstances that throw you into survival mode. Parenting did that for me.

Survival mode. You know who doesn’t have room for rigid ideology? People in foxholes. No matter how lovely your worldview appears on the page, if I can’t bend its edges and cram it in a corner, it’s not getting in the foxhole with us.

This is not a brief against any particular ideology, mind you. I’m talking about the whole damned lot of them. Communal property and pure democracy? Extol their virtues when the final few occupants of the family cookie jar are all that stands between you and a full-on Jack Nicholson redrum here’s Johnny meltdown. Or when every one of your kids believes he should have a vote regarding supper. Sometimes Mel Brooks is right: “It’s good to be the king.”

Self-reliance and every man for himself? I don’t think so. These kids are breaking me financially, mentally, and physically. They’re going to owe me when I’m old, which, at the current rate of disintegration, should be any day now.

I suspect that for every neatly posited maxim about The Way Things Ought To Be, there is an equal and opposite force lurking in one of life’s ambushes. Once you set yourself to the hard labor of civilizing some humans, or caring for the wounded and broken, or battling for your own life against a disease that clamps onto you like a hungry animal, you find that an ideology—while it may be true and historically determinative and profoundly insightful about the destiny of mankind—just isn’t relevant to your life in this moment—which is all your life is and will ever be: this moment and what you do within it.

I read that Washington, D.C. has considerably fewer households with children than does the average American town. That percentage drops even further, once you isolate the policy wonks and political consultants and Congressional aides from the regular folk. A lower portion of them are married, too. Their education levels, meanwhile, are off the charts.

What do you get when you throw together a bunch of young, healthy, commitment-free professionals highly versed in ideology and politics? Well, you get Washington, D.C. You get people fighting and clawing over profoundly different philosophies of government because the most important thing to each one of them is crushing everyone who is wrong.

Maybe they’re doing the right thing. The right ones, I mean. The wrong ones can go suck an egg. But maybe the ones who are correct in their ideologies—whoever they are, if there is a right-thinking creature left in that city—are doing the best that can be done, which is smiting their enemies who are, by dint of bad ideas, our enemies.

All I know (and this quantity diminishes yearly) is that from this remove, their battles seem not inconsequential, but inadequate. I know tax rates and health care and military interventions matter tremendously. But I know that my neighbor does, too. And while the true believers in Washington see everyone who disagrees as an enemy to be crushed, I don’t give a hoot whether my neighbor shares my ideology.

I just want to know that she will let me borrow her power washer when my kids make my truck home base in their dirt-clod war (again). And she doesn’t care what philosophy I read, so long as I continue to pay cash for the eggs her chickens lay. Maybe ideology only becomes more important as our neighbors become less so. Maybe overcoming our divide is accomplished not with elections, but with casserole dishes.

This post originally appeared on Good Letters on January 31, 2014

Tony Woodlief lives in North Carolina. His essays have appeared in The Wall Street Journal and The London Times, and his short stories, two of which have been nominated for Pushcart prizes, have been published in Image, Ruminate, and Saint Katherine Review. His website is www.tonywoodlief.com.

The above image by atravellingmom, used with permission under a Creative Commons license.