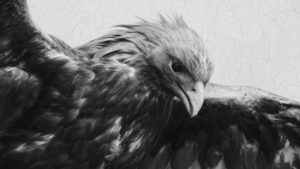 Sometimes a poet will take a familiar story but re-tell it from the point of view of a minor character. That’s what Kathleen L. Housley is doing in “The Cartographer of Disaster”: she gives us the biblical story of Noah and the Flood from the viewpoint of the raven that Noah sends out after the waters have receded until mountain tops become visible. In the Scripture story, the raven is mentioned only in the line that Housley takes as her epigraph, and its return to the ark is never noted. So Housley imagines the raven’s experience when “it went back and forth, to and fro” over the waters. First it becomes aware that the assignment Noah gave it isn’t appropriate for a land bird like itself. It weakens as it “tries to glide on stiff wings.” But it forges on, surveying the remnants of life poking up from the receding waters. The raven begins to map the coordinates of visible remains, “while grappling / with the problem of how to plot bearings as straight lines / that drowned mariners can follow to reach safe harbor.” With those “drowned mariners,” who of course will never reach safe harbor, an eerie darkness enters the poem. This climaxes, to my mind, in the final stanza, with “a child’s arm caught between fence posts.” God does not come off well in this poem. His announcement, in Genesis 6:7, that because of all the wickedness that humans have descended into, “I will wipe from the face of the earth the human race I have created” had sounded legitimate and general at that point. But when Housley’s raven takes note of the “drowned mariners” and the “child’s arm,” we see the effects of God’s destructive action in a new and disturbing way.

“The Cartographer of Disaster,” by Kathleen L. Housley

And he sent forth a raven and it went back and forth, to and fro,
until the waters were dried up from off the earth.
—Genesis 8:7

To traverse open water searching for signs of life,
a seabird is more suited than a land bird,
which needs the trustworthy stubble of wheat fields
and faithful hills that never drift to find its way.
But the raven, weak from long restraint, does its best,
trying to glide on stiff wings as the albatross
and seeking updrafts as the fish hawk.

First it scouts the contours of a submerged city
from which towers rise to the surface like water lily stems
in a placid pond. Then it surveys a herd of ibex,
their recurved horns tangled in a mass of drifting reeds.
Expanding its search pattern, it marks the longitude
and latitude of a wine vat snagged on a pyramid’s tip.
But nowhere does it see a single living thing.

Come nightfall, the raven, wing-weary and famished,
rests on the floating carcass of a bull elephant,
passing the time till dawn pecking topographic lines
into its bloated belly, pondering the great circle distance
of mudflats now turned into seafloor while grappling
with the problem of how to plot bearings as straight lines
that drowned mariners can follow to reach safe harbor.

When sunrise brings no hope of finding an olive branch,
the raven wonders what Noah will do with a damage tally
that includes a child’s arm caught between fence posts.
Better to become a cartographer of disaster inking
a cartouche of ill omen than to return to the ark.
After all, what use are casualty figures to the dead
or promises of repair? Too late for them—rainbows.

Kathleen L. Housley is the author of Firmament (Higganum Hill). Her poetry has appeared in the anthology Writing the World (Terra Nova), Christian Century, and online at Nimble Spirit.