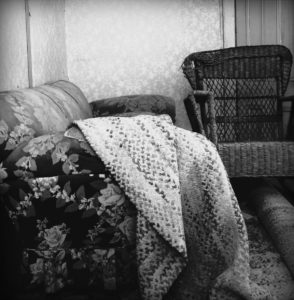 Until a few months ago, I thought Aleppo, Syria was one word. I’d never seen it in print, only heard it, and just once, from the lips of my grandmother. “I was born in Aleppo, Syria,” she said, and since there was no pause between the “o” and the “s” I figured she was referring to a country somewhere in the Middle East.

That’s what she said next. I know because I have it on a cassette tape. I recorded her for an Oral Interpretation class I was taking in college.

This was probably my first tryst with the genre of creative nonfiction, and I loved it. I’ve always been shy and so it was freeing to immerse myself in another world while using my voice, my body, and my personality to portray that world. Learning someone else’s story helped me learn about myself.

My grandmother lived about two blocks from Calvin, the college I attended. The day I came with a recorder, she made coffee and “S” cookies,” buttery cookies smothered in powdered sugar. I had a list of questions for her, but once I pressed “record” my grandmother took off. “I was born in Aleppo, Syria,” she began.

I sipped my coffee, ate cookies, and watched. She looked pretty in a navy blue sweater, happy to her tell stories. She sat up straight and her hands rested on the table or around her mug, except every once in a while when she used an index finger or palm to thump the table when she wanted to drive a joke home.

She’d been doing laundry earlier, and at one point the hum of the garments summersaulting in the dryer ceased and my grandmother stood up to get them, her heels thumping loudly on the floor. She brought the clothes back in a basket and continued where she left off, folding crisp creases and patting each piece before putting it on the stack.

Two men always made an appearance in my grandmother’s stories: my grandfather and Jesus. My grandmother loved them both. On this day, she told me how my grandfather proposed to her. She was getting the mail with her friend when she received his request for her hand via telegram.

“I am very shy, Callie,” she said and lifted her eyes to mine, without lifting her face. That’s my move, too.

“Quietly, I say to the man, ‘Tell Theodore I say yes.’” She leaned back in her chair, folded her arms, and shifted sideways. “Well, this man,” she said in a mixture of amusement and disgust, “he is very gruff, and he say, ‘Say yes to what?’” My grandmother lowered her voice an octave and sort of growled to mimic the post office man.

I remember listening to that tape with a stack of index cards, and a pen. I wrote everything down and then I spread the cards on the floor to see what I had. I rearranged some cards, took out some words, and wrote gestures and movements in some places.

Then I memorized the story. I spoke my grandmother’s words while I walked to class, and while I vacuumed my little dorm room floor. I wrote her story in the margins of my notes during education classes to try and stay awake.

“I was born in Allopsyria. You know, Damascus?” I took a small stack of laundry with me on performance day, and I folded it while I performed. I told her jokes and walked just as she had. I nailed the engagement anecdote. “I didn’t see you. I only saw your grandma,” was one of my classmate’s comments.

It’s been months since I saw the video of the little boy in an ambulance after a raid, so shocked he couldn’t cry. That’s the first day I saw the words Aleppo, Syria in print, and realized how much I do not know.

I watched the video again and again to see if there was anything more to learn. Where were his parents? Were they OK? What would happen now? I studied his face and any movement he made to try to find a story to tell, as I’d done with my grandmother. I was using everything I know and love about creative nonfiction to create a story that I could bear.

My grandparents, my mother, and her older sister came to America when my mother was five. I don’t know the specifics, but I know if they stayed where they were, they’d have been killed. I also know they weren’t supposed to get on the boat, but my grandfather “knew a guy” and off they sailed to Ellis Island.

About fifteen years later, he was killed by a drunk driver. My mom was a junior in college, my Aunt Joyce had just graduated. My Aunt Lucy, the daughter who was born in America, was thirteen.

I’ve heard that trauma can be passed down from generation to generation, like a walk, brown eyes, or an accent. I remember learning that for the first time the day my Aunt Lucy died. She was fifty-six, the same age as my grandfather when he died. I was nine months pregnant and some well-meaning family member warned me not to be sad because I’d pass it along to my baby.

How do you stop it, though? How much knowledge of a story is needed so it is no longer hereditary?

Maybe it’s not the mistake about Aleppo that makes me feel bad. Maybe it’s the understanding of what the little boy and I carry: what we will carry and pass on, wherever it is we walk, and whatever it is we create.

Callie Feyen lives in Ann Arbor, Michigan where she is an At-Risk Literacy Specialist in the Ypsilanti Public Schools. She is an editor for TS Poetry Press and a contributor to Coffee+Crumbs and Relief journal. She is currently at work on her first book for TS Poetry Press, and three of her essays will appear in The Magic of Motherhood, a Coffee+Crumbs book published by Zondervan, due out in April.