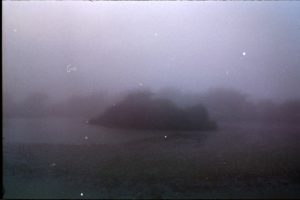 Grief is like a long valley, a winding valley where any bend may reveal a totally new landscape.
—C.S. Lewis, A Grief Observed

I drag my three children outside for a walk. They are too young to understand how desperately I need to take advantage of the warm weather even if it’s a landscape of dormant fields, melting mud, brittle gray plants that line the bridge and sides of the road, a bright red barn against yellowed grass.

Lest I get too excited about the lack of snow and cold, my husband reminds me that this unseasonably pleasant winter in the Midwest is the result of global warming. I guess we both have our ways of grieving.

This is our first day back in Illinois after spending a week in Texas to grieve the loss of my father. We’ve eaten too much or too little depending on our body’s responses to stress. We’ve laid flowers on his coffin and wept over him in a gravesite service that he might’ve hated, but was one that his daughters and wife needed. Then we mourned him at a church memorial service that he planned before his death, writing his own obituary and the opening remarks he asked my husband to read, ones that unapologetically deflected attention away from himself.

But we three daughters inserted ourselves into his plan, a plan that didn’t necessarily include our grief. In this midst of his intellectual, cerebral, worshipful funeral, we spoke of him in ways that might’ve touched him but also might’ve confused him.

In his effort to plan his truly humble memorial, he didn’t sidestep our grief to be unkind; I’m sure he knew we’d miss him terribly. Maybe he thought that if he could deflect attention away from himself, we wouldn’t be so sad. But what he wouldn’t have guessed, or what might’ve annoyed him, was that most people that came to honor him wanted more of him.

Yes, they loved that this service expressed the man they knew, the one who loved his church and carefully planned each part of the service. But they wanted more of his heart, not more of his head.

That’s what I always wanted more of too, more of my dad’s heart. I suspect I had more of it than he expressed but I’ve had to forgive him for not being able to express it. Forgiving my parents is something I must learn as I raise my own children in the world, desperately aware of the things they will have to forgive me for.

My eldest child at eight years old most easily expresses her feelings in words. She pulls at one of the brittle sticks that line the road on our walk and gives one to her little sister too. The two sisters create walking sticks out of the weeds while my son runs ahead.

“I love living on a farm,” my eldest says. “I hope we never have to leave.”

Her comment is not without context; we’ve just told our children that their Daddy has quit the farm. With the death of my father, a fourth baby on the way, and a contracted book due in the summer, this news could be considered terrible timing and too much transition for all of us to handle gracefully. On the other hand, these griefs and unknowns have pushed us to make decisions we’ve been putting off for a while.

My daughter’s questions to this news are astute and understandable: “What does that mean? Will we still live here? I don’t want to move.”

Pretty quickly, we wonder if we’ve told the kids too soon. Is this burden too big for them, when the unknown could stretch ahead for months? I don’t know how to answer her because we don’t know ourselves what the future will be.

Is this something you’ll have to forgive me for? I wonder, as I watch them enjoy the only home they’ve ever known. I want to say to my eldest: I have always hoped I wouldn’t have to move either, darling, but if you’re alive long enough, life and death move you whether you want to or not.

With so much to traverse—sorrow, a potential move, a birth, a book—I wonder what will emerge or depart in the coming year. Maybe tomorrow will be brighter, warmer, and revealing, or as C.S. Lewis says, “a new landscape” that will show some possibilities for unexpected growth. But maybe tomorrow will be dark and empty, a tangled mess of brittle weeds.

I know my daughter loves her life here, even when it is cold, dormant, or brittle. She’s lived here since she was a baby; to her, it’s all home. She wonders how life will be if we move away from the farm. And as I watch her add more dead flowers to her walking stick, I feel like an eight-year-old girl too, afraid in that visceral way that tingles down the spine. In the way of a child, I wonder how I will face a new place, new friends, and another child.

How will I live life without my daddy? How will I be me anymore when there is a dark empty space where he used to live?

My eldest daughter and I, my husband, and each of our children are mapping out new territory together. Then again, maybe there is no map and we are heading blindly into the wilderness, hoping this new movement of life will not be the end of everything we know about ourselves and our place in the world.

But if it is the end, maybe it will end only for a moment. As Lewis says, “In grief nothing ‘stays put.’ One keeps on emerging from a phase, but it always recurs. Round and round. Everything repeats.”

Maybe, just maybe, we will eventually emerge from that spiral, from the repetition of old fears, feelings, and sadness with a new map, or at least something to tell—whether perilous, brutal, or exquisite—of the landscape we traversed.