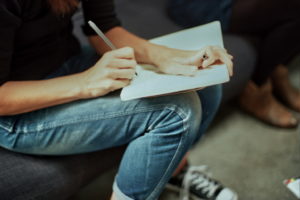 “No, you should definitely major in English,” I told our babysitter, a high-school senior from our church who is considering an English or Communications degree. “Fiction is just like faith,” I said, “it’s its own kind of knowledge that makes our lives richer.”

Growing up, mystery meant Sherlock Holmes and The Hardy Boys. It meant a problem of insufficient information, a puzzle of the material world that required careful reasoning and a little courage to sort out.

The Hardy Boys solved pretty ordinary problems, though. They were adventures as much as mysteries. In Sherlock Holmes, by contrast, mystery took on a cosmic significance.

Holmes’s ability to reason in linear fashion from observation to conclusion indicates his mastery of the basic machinations of the world. The largest mystery, in many ways, has been solved for him. He may have moments of reflection on the tragedy of misplaced love or foolish ambition, but he lives in a more or less mechanical world whose workings can be known and understood.

I used to love the clarity with which Holmes sees the world. I loved the precision with which a sign leads to an inevitable conclusion. A dirty hat means a problem with the wife. A man’s abnormal interest in geese means he’s a jewel thief.

This is a reassuring view of the world, and I was drawn to it because I never experienced the world as so certain, myself. I still do. The world is made, perhaps, for those who feel confident they understand it, and not so much for me.

But as I’ve aged the orderly world Sir Arthur Conan Doyle imagines seems less and less a Christian one. The more I learn about life, about creation, the more I believe it is infused with a kind of mystery that is not knowable in the way that Holmes knows things, though it may be knowable in the way we know things about Holmes.

Take that most familiar of experiences: love, specifically marriage. It’s become commonplace to hear personalities on NPR speak flippantly about “mating for life,” as if marriage were a quaint tradition that most of us educated elite have evolved beyond.

And yet it’s an institution that dies hard. No one is forcing anyone in the U.S. to get married, anymore, or to have kids. In fact, we know the pain of losing the beloved is unimaginably worse than the pain of losing dear friends. Still, we keep seeking out that grail of a lasting intimacy, a bond of unity and stability that is not just good for raising children but that offers comfort and emotional connection late into our lives.

Plenty of people (also on NPR, sometimes) will argue that this mystery is merely phenomenal, an experience that does not necessarily correspond to any (empirical) reality. For people of faith, that’s not an adequate response, though. We say and believe crazy things about love, like “God is love,” or that we have a moral duty to love not only one another but our enemies, or that love can be expressed by sacrificing yourself/your son for the sake of the very people who sought your death.

Just what the is in “God is love” means comprises one of the great mysteries of the faith. It feels at once both simple and fathomless. To love is to be like God or act in a godly manner, but is God actually present in a special way wherever there is love? When we experience love, how is that like or unlike experiencing God Himself?

How is this love consistent with the condemnation of sin or the doctrine of hell or even with the crucifixion, sending his son to die a violent death?

Similarly, the incarnation and the trinity are doctrines of immense beauty and power, but they are not easily reduced to Enlightenment categories of thought.

William Lane Craig argues that the doctrine of the trinity is rationally coherent if we simply attribute three centers of consciousness to a single substance. In one sense he is right, but to me that does not significantly clear up the mystery. We have no model for such a being except monsters like Cerberus or the comical two-headed creatures of cartoons and fantasies. These are more likely to fight amongst themselves as distinct minds rather than cooperate as multiple centers.

To live in the mystery that God is love or that God is three-in-one requires something like a fiction-writer’s skill. We have to devise some workable story for ourselves to explain just what’s going on, but we also have to simultaneously believe that our story is provisional, inadequate.

Our stories serve our emotional needs and help us in our moral reasoning, but we know we see only obscurely.

Belief in this fictional sense is creative or productive, an act of fashioning lenses that help us see reality more clearly than bad beliefs. It is our paltry, wondrous contribution to the divine gift of faith.

And belief in this fictional sense shows us that our other fictions should not be dismissed as untrue just because “they didn’t happen.” As if the tales that teach us love, give us hope, and inspire us to great deeds have no reality or power. As if what happens is more inevitable than what ought to happen.

I’m not teaching English, anymore, and I get the whole “paying job” thing, but I believe in fiction, in the need for fiction, and in its mysterious relationship to faith. So I’ll keep telling your kids that they should devote themselves to it, as I hope our babysitter will. Life’s too short and wonderful to let them tell you bad stories about it.