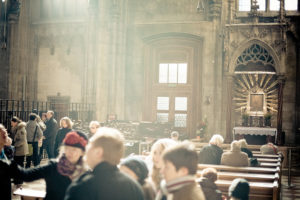 They say God won’t let you go under; but it seems he will let your hair get pretty wet.

Most trials, if they’re worthy of the name, don’t let you get away without a good scare, maybe even a rent garment and some scratches, if not scars. The less lucky might have to surrender more. Cries for help may be answered, but instantaneous, immediate resolution is admittedly rare. I think most would concede that. The difference in people is how they handle such things; some can march on while singing hymns; others curse like all get out through their turmoil.

The comforts of spiritual sustenance alone are hard for some, among whom I number, as we are the class not given to feeling anything particular at such times, though we believe we are being sustained in a ghostly fashion. My faith is more of an intellectual assent; I am convinced of it, but it does not really make me feel better for that fact.

That is not to say that I have not on occasion been assured of God’s closeness, or of the numinous all about me. There have been experiences—an odd, gentle suspicion—a whispery awareness—most often when something grave has happened, such as a loss. Still, I was not given the gift of a soul that stirs easily. I do not doubt others who claim this for themselves—I envy them, in fact. I can only say that I don’t have the talent.

And that’s how I perceive such things—as faculties that some possess in greater quantities than others. I am akin to the colorblind and the tone deaf. I must make do.

When trials come for such people, we have a tendency to adopt a stoical stance. Endurance is the byword, along with perseverance, resolve, tenacity, and all the other terms that pop up in the online thesaurus. We tend to believe that in some unseen, unfelt way, provision is being made; that is what we are taught, and what we assent to—the way a child assents to the truth that a serpentine figure on the blackboard stands for the letter “S.”

But it often stops right there, and though prayers are vaulted asking for guidance and relief, we think deep down that we’re just going to have to work out our problems all on our own.

Is this a lack of faith? Some have suggested that it is at the very least a lack of trust. While I believe in the old saying that “God helps those who help themselves,” insofar as it counsels industry and acknowledges that grace comes through a cooperative association with the divine, that tenet has a down side. It can lead to a kind of Deistic view of God, too remote to be engaged, and therefore quite easy not to rely upon.

It’s safer too; you can’t be disappointed and let down when you never expected anything in the first place. Such a perspective has to be guarded against, because it can tip over into what is, for all intents and purposes, a disbelief in God’s compassion.

So this tendency might indeed be a lack of trust then, but I think it is the natural flaw for the more unmovable beings in the flock—those with cool souls. For those who know God on a more intimate basis, who have that talent for sensing God’s presence, there cannot be a lack of trust. At least it wouldn’t make sense not to rely upon what one can feel to be so close.

Does that mean intimacy is a prerequisite to trust? It would seem to a degree, yes. Then is it foreclosed altogether to those who are not intimates—to the assenters, those who believe that they are God’s children, but can only feel themselves to be his acquaintances? Not altogether.

It is just harder. I have never undertaken the Spiritual Exercises of St. Ignatius, but recently heard a priest say that if you remain convinced and undoubting of your position vis-à-vis God, despite your disconsolate feelings, you can trust that he is with you and that you are on the right path.

When suffering through trials, it would be nice to feel better as one assents to a path found by way of deduction, but God is still there even so. In that, we take our comfort. He is the conclusion; he is the deduction.