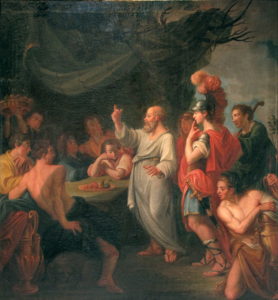 The following is a response to Morgan Meis’s letter posted yesterday.

I’m enjoying this conversation but at times I worry that you’re playing Glaucon to my Socrates. In other words, just egging the “master” on. I want to be sure you’re not just tossing up softballs for me to take a swing at. You’re a professionally trained philosopher; I’ve never taken a philosophy class in my life. So don’t hesitate to take a real swing…at me!

Now I don’t want to bog the conversation down in quibbles but I worry that semantic differences and definitions may be getting in the way. You’re getting at this when you accuse me of doing a “bait and switch” in defining beauty—messing with the “registers.”

My point about Donatello’s Mary Magdalene was that the work of art can take what is ugly—a ragged, gaunt, old woman—and transform that ugliness into a form of beauty—a simultaneous perception of spiritual beauty inhering in outward brokenness.

That’s why Greek tragedy and The Cross are able to reveal beauty truthfully—without denying the fallen condition of the world, something you rightly insist upon. Donatello’s Magdalene is a beautiful work of art, even while it depicts ugliness. Art can reveal the inner beauty of the human spirit, wounded and yet possessed of dignity and desire.

I conceded that the Greek sensibility was dominated by the “pull,” as you put it, toward the ideal. But are you really approaching the question “What does Jerusalem have to do with Athens?” in Tertullian’s scornful tone? Is this really an eternal Manichean struggle, never to be resolved? Have you put all your cards on the table?

In short, is it not possible to find a synthesis that still respects the tension? The Christian Humanist in me wants to believe that it is possible to see this tension in terms of paradox—paradox as something fruitful and generative, not merely deconstructive.

In The Vindication of Tradition, Jaroslav Pelikan writes:

The tension and complementarity between Athens and Jerusalem has been a recurring theme, a sort of melodic counterpoint, of our tradition. And it must still be, for us as descendants of these two grandmothers, with that melody we learn to sing, and from that counterpoint we go on to compose melodies of our own.

I would be the last person to deny that our Greek grandmother still speaks strongly to us: just look at any magazine rack or the vast majority of Hollywood films. We remain obsessed with outward, physical beauty. It sells.

But that is not the highest truth—the truest melody—of our tradition. And it is precisely here where our religious tradition offers us the antidote.

In his address to the Catholic lay movement, Communion and Liberation, then-Cardinal Ratzinger (later Pope Benedict XVI), addresses the tension between Jerusalem and Athens on matters of goodness, truth, and beauty.

He cites two scriptures that are seemingly in conflict with each other. Psalm 44 says: “You are the fairest of the children of men and grace is poured upon your lips.” But Isaiah 53 says: “He had neither beauty, no majesty, nothing to attract our eyes, no grace to make us delight in him.” Ratzinger then quotes Augustine as speaking of this paradox as the “two trumpets” of revelation.

Ratzinger goes on to note that Augustine “knew that a paradox is contrast and not contradiction” and concludes:

Whoever believes in God, in the God who manifested himself, precisely in the altered appearance of Christ crucified as love “to the end” (John 13:1), knows that beauty is truth and truth beauty; but in the suffering Christ he also learns that the beauty of truth also embraces offence, pain, and even the dark mystery of death, and that this can only be found in accepting suffering, not in ignoring it…. In the Passion of Christ the Greek aesthetic that deserves admiration for its perceived contact with the Divine but which remained inexpressible for it, in Christ’s passion is not removed but overcome.

If this is true, then the synthesis already exists in the Gospel itself and not just in the efforts of later theologians and philosophers. In The Cross the ugly becomes beautiful.

As for the nature of creation: well, I guess that’s not a gently tossed softball! You ask: “Is creation good because it is beautiful (i.e., we like it and take pleasure in it) or beautiful because it is good (harsh, ugly, and aesthetically unpleasant though spiritually fortifying)?”

Something about the way you formulate the question feels wrong—a false dichotomy? Or maybe it’s a trick question!

Anyway, surely Augustine needs to come to the rescue again, right? Isn’t this where we turn to his understanding of evil—shorthand for harshness and ugliness—as a diminution of goodness? Evil as a mange on the skin of a good creation? If creation itself is harsh and ugly, that would, in fact, amount to a Gnostic approach to reality.

The Gnostics, as you know, believed that the created universe had been created by a bad god, demi-urge, what-have-you. For the Gnostics, beauty was disembodied spirit, not matter—the goal was to escape “creation” entirely and get to the purely spiritual realm.

Greek philosophy and the Western religions affirm the goodness of creation, which is the source of its beauty. The goodness of the world can be ravaged by evil but at root all of creation is good, even if it is diminished and marred. St. Paul’s image of creation as a pregnant woman in labor remains compelling: all of creation “groaneth” for restoration of its ultimate beauty.

In the meantime, we must come to appreciate the paradox of “broken beauty,” which both attracts us and keeps us tethered to truth. But such a vision takes into account the whole truth, not just one aspect of it. Contra the Gnostics, we can still see beauty shining forth from this wounded world.

But, hey, if I need to be disabused, go for it!

Above image is Nicolas Guibal's “Socrates teaching Perikles,” used with permission under a Creative Commons license, via Wikimedia Commons.