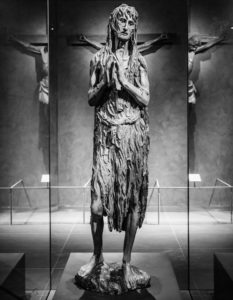 Thanks for your response to my latest “challenge,” as you put it, on the question of beauty. I love all the things you have to say and find myself both moved and convinced by the nuanced, complicated version of beauty you’ve put forward.

Or I should say…almost convinced. Alas, there are still a couple of sticking points for me. But what did you expect?

I’m extremely glad you brought up the Donatello statue. I had the chance to see the Penitent Magdalene on a trip to Florence some years ago. Like many a great work of art, there’s nothing like being in its physical presence. Pictures don’t do it justice.

You describe Donatello’s Magdalene as “a hollow-eyed, ragged figure.” That she is. I would go even further and say that she is downright ugly.

Gaunt and physically wrecked as she is, you go on to claim that there is, nevertheless, “a radiant beauty to her prayerfulness, to the evidence of her endurance of the slings and arrows of life, her hope for salvation. In short, it’s a work of great beauty.”

I agree with you about this, too. And yet, when you say it is “a work of great beauty” aren’t you switching up on the meaning of the word “beauty”? Because in the purely sensual, aesthetic meaning of the word beauty, the Magdalene is not a beautiful statue.

Calling it beautiful is therefore a little bit of a bait and switch. If such a figure approached you on the street, what with her half-crazed eyes and bones practically protruding through the flesh, you’d take a step or two back (even if you felt bad about yourself for doing so).

That’s to say, the spiritual work that Mary has been doing, her walking the way of the Cross, has taken quite a toll on her looks, but it has born spiritual fruits. You say that she has a “radiant beauty.” I see what you mean. I agree. But, again, to call it beauty is to shift the meaning of the word from one register to another.

What she has is great spiritual power, spiritual dignity, spiritual truth. We can use the word beauty, but when we do, we are risking a series of confusions and misconceptions, aren’t we?

You might ask, why does this matter? So what that we use the word beauty in various ways? Everyone can well understand what it means to say that the statue is ugly in one way and beautiful in another.

Another way to get at this problem is to say that I think there is a more serious rift between Athens and Jerusalem than you are allowing for here. Yes, as you say, the Greeks had a deep sense for the tragic. They recognized the essential frailty of human life. But there was also an undeniable pull in classical Greek thought to equate the physically attractive with the morally worthy.

Only the Greeks could have come up with the term kalokagathia (beautiful-goodness) to capture what is highest in human and worldly affairs.

We have inherited this Greek instinct to equate physical beauty with moral goodness.  But the Gospel puts forward an entirely different view. The Gospel writings themselves, it should be noted, are not especially beautiful from a literary point of view.

The story of Jesus, moreover, is the story of a person who could not be any more different than the Kalos kagathos, the beautiful and good aristocrat of classical Greek approval. In the Gospel, we meet a common schlub who does a bit of preaching, has some modest, if halting, success, is captured by the authorities, and dies a horrible death. (Let’s put the Resurrection aside for the moment, if we may).

The Gospel story is, from the Greek perspective, a world turned on its head. What was black is now white. What was weak is now strong. What was true is now false. What was ugly is now beautiful.

I’m not the first to wonder whether the entire history of the West is not, in a sense, a history of trying to square the unsquarable circle of Athens v. Jerusalem.

I think you can see Donatello’s Penitent Magdalene as the work of an aging genius who has finally cast away the Greek fascinations of his early life (when he used to run excitedly around the ruins of ancient Rome with his buddy Brunelleschi) and turned back to the fundamental insights of the Gospel, which are, from the classical Greek sensibility, practically anti-aesthetic. Mary Magdalene is not the only penitent here. Donatello has created the statue as his own act of penitence, his own acknowledgment that he’d gotten the relationship between beauty and goodness the wrong way round.

I say that the conflict between Athens and Jerusalem around the concept of beauty is meaningful because it gets us down to the fundamental question of the goodness of creation. Is creation good because it is beautiful (i.e., we like it and take pleasure in it) or beautiful because it is good (harsh, ugly, and aesthetically unpleasant though spiritually fortifying)?

But I suspect I’ve now tread into the dangerous territory of a potential Gnosticism of which you will, no doubt, attempt to disabuse me. I gladly await the disabuse.

Above image of Donatello's Penitent Magdalene by Mark Hintsa, edited and used with permission under a Creative Commons License.