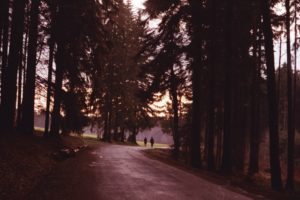 Lately all I want to read are young adult novels about sisters.

Young adult (YA) lit has a simplicity that creeps up on you. It’s about falling in love and obligations to the world outside of our daily concerns. And it’s usually disturbing as hell, reflective of how, though we say we lose innocence, as we grow older we really lose darkness. We lose insight into a mysterious world full of wonderful and awful possibilities where so much is at stake.

Seanan McGuire’s Dusk or Dark or Dawn or Day follows Jenna, a ghost-girl who works at a suicide hotline in New York, trying to return a debt she feels she owes to the living while looking for the spirit of her sister.

Jenna’s sister Patty left home in West Virginia to live in New York, where she lies to her family about her wonderful life. After Patty ends her life and Jenna drowns in a ravine while mourning her sister, Jenna haunts New York, falling in love with its alleys and diners and rat witches(!), and thinking about the solace and sadness her sister would have experienced on the same streets.

When I was a teen, I made my sister vanish, and she did the same for me. Once, we were ten and eight, acting out a scene from Fiddler on the Roof in the field, and the next thing we knew, we both were in college. I tell her I ran to a boulder in the woods when our mom would harm herself, and she says that she was there too, and how could we have been at the rock at the same time?

We have no memory of each other for years and years, and then suddenly she appeared in my life again, and I would do anything for her.

Kendare Blake’s Three Dark Crowns follows triplets separated at birth, raised by warring families, each instructed in how to develop their supernatural skills in order to kill their siblings and rise to the throne. Katharine is a poisoner, taught to consume harmful plants and venoms without dying, though her body bears all the scars of her failure to tolerate her gift.

Arsinoe is a naturalist, who should be able to call plants to grow and animals to become her consorts. Her gifts haven’t taken hold of her yet, and all she can do is tromp through the woods, watching as nature responds more willingly to the magic used by her adopted family and friends. And Mirabella is the star, an elemental whose power over storms and fire has all but ensured she’ll remain alive after fighting her sisters.

I read Three Dark Crowns last fall, and I haven’t been able to stop thinking about it. What struck me about it was how easy it would be to accept violence as your destiny if you’d never known another world. Though, the more I thought about the possibility of the sisters joining forces and using their powers to topple the system, I realized that would mean that the sisters would have to obliterate the groups that had raised them.

And so, perhaps, what looks like compliance is sacrifice, where sacrifice is a choice between many bad options, a choice guided by unwillingness to cause more harm.

I never read YA lit as a child or teen. Because of the conservative parochial school I attended, I wasn’t allowed to read modern non-Christian books. My dad gave me old books to read—War and Peace, Don Quixote, Beowulf. And I loved them, though they turned me into a bit of a snob. All I wanted after that was serious, wordy prose full of complicated ideas, and I even rolled my eyes at the Psalms in church, finding them simple and juvenile.

Of course, the Psalms are simple. And it’s a fortunate thing to be able to roll one’s eyes at a Psalm. It means you haven’t lost much, or grieved, or found yourself helpless and deserted. It means you’ve never been dead-scared. If you can mock something, it means you wouldn’t give anything to have it back, and that is a lucky circumstance.

In Stephanie Garber’s Caraval, two sisters run away from their brutal father, who uses the bond between the girls to inspire constant fear. The sisters’ desire to escape and live full lives is thwarted by their need to protect each other; if one flees or meets a lover, the other will be beaten. Yet eventually, the girls run to Caraval, a magical amusement park/theatrical game where one sister is kidnapped, and the other must find her in a sea of illusion.

In Caraval, there are sacrifices. Without spoiling it, I can say that the sacrifices are those of a teen girl, considering all the violence—real and potential—in her life and her sister’s life, and acting to stop the chain of abuse and escape, and of making choices that are never truly chosen.

YA lit shows us how we tell the same stories over and over again: trying to love, make sense of loss, and bestow messy salvation. We make lists to remember, to guard against erasure, to hold fast to the people we love.

We attempt not to be afraid as we make ourselves very afraid. I’ll take a nightmare over a good dream any day. I like a good story, and nightmares have all the best stories.

It’s why the books stick with me: salvation is messy and rash and seemingly thoughtless when so much is at stake. And at the risk of putting on my teen-girl voice, so much is always at stake.