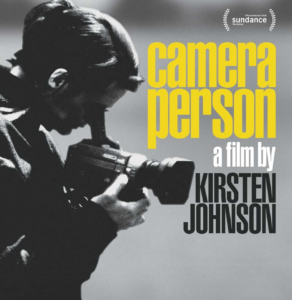 When we first see the close-up of the dead bird on the ground, we wonder why. It’s only a few scenes later that we return to the site of the bird to see two young children, twin brother and sister, asking their mother and grandfather if they can go outside to bury the dead bird.

He looks at his daughter—the twins’ mother—who is also the cameraperson, so it’s as if he’s looking at us. “What’s the word? Ashes to ashes, dirt to dirt?”

In creating a non-linear montage of moments drawn from her work as a cinematographer during the last twenty-five years, Kirsten Johnson searches for some contiguous logic that can make sense of the seemingly disparate moments that have, in her words, most marked her.

The viewer will see many different countries via footage from twenty-four documentaries. One moment will be in the Bosnian Mountains, the next on New York City streets. We first become attuned to the montage as pattern because eventually we return to a particular subject we’d seen earlier; the first emerging motif is that Johnson has documented sites of great violence and death, especially in the aftermath when grief afflicts memory.

If pain and death are part of life’s tapestry, can the pattern be beautiful?

Just after the title screen appears, Johnson sneezes twice from behind the camera and the screen shakes. This isn’t just a documentary in montage; Johnson asks us to consider it her memoir. Mostly she remains hidden from view, but everywhere there are clues of her presence.

There is something instructive about a cinematographer’s memoir: Like any memoir and its author, it’s insufficient to say that Cameraperson is about Kirsten Johnson. We discover something about Johnson’s identity when we notice, for instance, her editing choices, which are crucial to discovering meaning in a montage style. We learn about Johnson when we attend not only to what she sees, but also to how she sees it.

Consider three of her subjects: What do a boy blind in one eye, a midwife who has seen it all, and a herd of sheep have in common?

In Kabul, Afghanistan we see in extreme close-up a local young man looking out of his good eye. In his own language, he tells the story of how he lost vision. How he was with his brother. How he heard his brother scream before he was knocked out from the impact of the rocket. How he woke to find his brother without a face. How he saw the inside of his throat. How in view of the sight he shook. The memory exhausts him.

He tries to avoid crying. Johnson keeps her camera steady and chokes out, “You are making me cry even though I don’t understand the language.”

Knowing English, he smiles. She laughs through her tears.

In Kano, Nigeria the midwife remains calm when the second twin finally arrives, feet-first, only to immediately become endangered by an inability to breathe. The midwife holds the baby upside down and applies firm pats to the back. We hear fresh cries.

The midwife leaves momentarily. Johnson holds steady on the infant. “Oh my god, he’s breathing. I’m so happy,” she says. Then, seconds later the baby struggles again to breathe. Johnson asks, “Should we go get her?”

I am relieved to find the midwife and make sure that the baby is going to live. This movement, this relief, reminds us that we are not just cinematographers documenting the world as it returns to ashes. Seeing well is bound up with becoming like the midwife—assisting human life in the world.

The midwife says, “He needs oxygen now and we don’t have oxygen here.” She keeps searching.

The film’s first image is a shepherd with his herd as they pass by Johnson’s camera, which sits low to the ground—on the herd’s level, in the dust.

Preceding the image of the dead bird is footage of Catherine Joy Johnson, Kirsten’s elderly mother, three years after her Alzheimer’s diagnosis. She walks gingerly around the Headquarters Sheep Ranch in Wyoming. Her face is dimmed by the increasing loss of memory—the loss of identity. She walks toward us and a powerful gust of wind momentarily blows her off balance, sweeping dust all around. At the surprise sensation, her expressionless face broadens into an instinctive smile.

After the image of the dead bird, there is footage inside Johnson’s father’s house where there’s a shot of a mantel that holds the cremated remains of Catherine Johnson. In front of the remains is a small glass lamb with the letters “Wyo.” Then a close-up of the little lamb, first in profile, then face-to-face.

Suddenly, Johnson cuts to one of her own hand-written notes from 1975, when she was a child:

Lord you are wonderful!
You created the world!
You created me!
Your love never ends!
And my love to you will never end!
You are a great God!

When I read young Kirsten Johnson’s meditation, I recall the astrophysicist from earlier, the one who talked about quantum entanglement, about how there’s this underlying layer of nature that we haven’t discovered. But we know it’s there. In some mysterious way all things are connected.

It occurs to me: In our movement with Johnson from memory to memory, from ashes to ashes, in our striving to make sense of what can possibly neighbor us in the midst of so much suffering, we might, through it all, find ourselves being shepherded.

Memory is crucial to the pattern: We must remember what we’ve seen in the film; Johnson remembers her mother as she descends into forgetfulness; the victims remember the atrocities and thus bring them to light. We have a short prayer for the hope that we will be remembered after we return to ashes: Memory eternal.