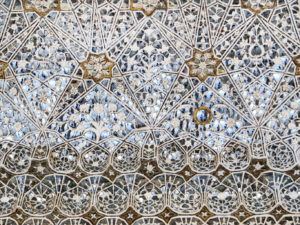 I sat through the meeting distracted, nervous.

I should have been at ease. After all, I was with friends—members of a Christian-Muslim interfaith group, people I’d worked with for many years, people I trusted.

But I was coming down with an acute case of performance anxiety. I had asked Ismet Akcin, the Islamic Center of Rochester, New York’s newly installed Imam, if I might recite for him after the meeting, privately, the Qur’an’s “Throne Verse,” sura (or chapter) al-Baqara, verse 255.

And to do this in Arabic.

For one thing, Imam Akcin is an intimidating figure. Though not tall, he is broad and muscular, a black belt in karate. He’s also a hafiz, one of that revered group who has memorized the entire Qur’an. Not to mention that he’s a mellifluous qari, or Qur’an reciter.

So deeply is the Qur’an embedded in Imam Akcin’s spirit that his conversation is constantly broken into by spontaneous quotations from it, quotations always directed to whatever issue might be under discussion. And this ceaseless beaming-in of Qur’anic reference is a joyful one, a glow that imparts warmth and color and life to both the topic and those discussing it.

And at least in Imam Akcin’s case, the joy of his absorption in the Qur’an has enhanced his innate playfulness. He makes even his struggle with English a cause for fun. He never resists the impulse either to laugh at himself or to tease his friends.

Which brings me back to the anxiety. Would he find my recitation laughable? I mean, I’m a Roman Catholic Deacon whose command of Arabic is many, many degrees weaker than Imam Akcin’s command of English. And wasn’t my choice of the Throne Verse…foolhardy?

It is the Qur’an’s best-known verse, after all. It can be found displayed, in beautiful calligraphy, on the walls of most mosques and Muslim homes. Yet while the Throne Verse uses the imposing imagery of a throne to suggest Allah’s sovereignty, its effect on the believer is not to crush but to comfort, not to frighten but to reassure and protect. That’s why Muslims recite it nightly before going to sleep. Or why constant recitation of it promises a happy death.

Perhaps I had not chosen so badly. Perhaps the Throne Verse would protect me from the criticism I knew I would deserve. Besides, I wanted to internalize a verse that for my Muslim friends seemed to sum up what was so consolingly special to them about their faith. Perhaps a glimmer of that consolation could be imparted to me.

The Throne Verse begins by asserting that nothing and nobody is comparable to Allah, then supports this assertion by pointing to Allah’s utter command over the entire created world, including the human creation (version by M.A.S. Abdel Haleem):

God: there is no god but Him, the Ever Living, the Ever Watchful.
Neither slumber nor sleep overtakes Him.
All that is in the heavens and on earth belongs to Him.
Who is there that could intercede with Him except by His leave?
He knows what is before them and what is behind them,
but they do not comprehend any of His knowledge except what He wills.
His throne extends over the heavens and the earth.
It does not weary Him to preserve them both.
He is the Most High, the Tremendous.

One Muslim source invites the reader to imagine the Throne Verse as a chiastic structure through which one walks, noting as one moves that the center element—“he knows what is before them and behind them”—seems to turn the reader briefly around, to appreciate better the symmetries in upcoming elements with corresponding elements of the receding flank. For example, the epithets used of God in the first element mirror those used in the last.

Yet the end is not a mere mirroring of the beginning but an expansion of it. Walking through the Throne Verse, one sees God first in terms of what he is not (slumbering, sleeping) or at an unbridgeable distance from us in space and authority (owning heaven and earth, having ultimate power of decision) and in understanding.

And yet just in those references to God’s supreme power over our will and understanding there comes a turn. Access to that power is given. God does not merely stand above creation. God presides over it (the throne). And his presiding is not sleepless but alert, moved by mercy to protect and preserve. The Ever Living is indeed the Most High.

I managed afterwards, alone with Imam Akcin, to stumble through the recitation. He did not, after all, laugh at me with scorn, or cut me to pieces with karate chops. He smiled broadly, with forgivable amusement, but also with boyish eagerness, as if to reveal a secret.

“Do you know about makamat?” he said.

No, I said, bewildered.

“They are different tunes for reciting this most beautiful verse. Here, give me your what-you-call-it…hmm, ‘smart phone.’ Hah! Smart! I like that…. Turn on the button here” (the camera, he meant), “and I recite for you some makamat.”

I still have this on my phone: Imam Akcin reciting the Throne Verse beautifully in a variety of makamat or traditional cantillations or tunes used for Qur’anic recitation.

The tunes themselves derive from several periods and regions where Islam has flourished. I’d had no idea that the Throne Verse, or any Qur’anic verse, could be heard in so many different melodic settings while still preserving its essential pacing and dignity. And the Imam was giving me just a sampling.

I left Imam Akcsin’s office with a great gift. Now whenever I walk through the Throne Verse I’ll know at least that the song, however ineptly I sing it myself, echoes through the years in a vast diversity of voices, but all alike in calling on the One God to guide them home.

George Dardess, a Roman Catholic Deacon currently serving the Rochester, NY, diocese as a consultant on immigration and interfaith matters, has written or co-authored several books on Muslim-Christian dialogue.