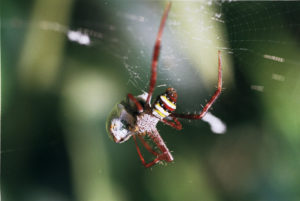 Three egg sacs hang in suspension in the garden near my doorstep. When I look for information online, most resulting websites discuss removal, infestation, means of discarding. The spider has lived between the wall and garden for a little over a month, a strange home in the alley’s wind tunnel. Gusts waver the plants during storms and windy nights, so the spider will sometimes spend hours swinging softly in her silk.

When an egg sac first appeared, I thought it was cloth or dust caught in the web, but then two more sacs jointed the first, cottony orbs like planets stopped in mid-orbit around the spider’s still bulk. One darkened with spiderlings, their bodies softened with newness and the pressure of spherical suspension, all those legs blending and twining together.

The spider and I have an understanding, as spiders and girls understand sometimes wanting to be left alone. She is Steatoda grossa, a false widow. I have no desire to kill her. At first, she was frightened of my footsteps, my tendency to drop my keys into the space of her web. But we’ve learned each other’s habits. I know she rarely moves, preferring to sit fat and splayed in strings that reach to the ground. She is in the same place every morning as she was the previous night. And she doesn’t startle or hide when I run outside, headphones loud, in the early morning.

My heart palpitations are worse in the morning. Cardiologists can’t find a cause or even an effect, the erratic beats a mistake without known consequence. They’re just something to get used to. Because I can’t get used to them, because they still feel like slices of death, I run and shove the headphones all the way in my ears to drown out the mistaken pulse.

When spiderlings hatch, they’re supposed to float away on silken parachutes, born, then airborne. The egg sac never empties its cargo; the tangle of legs never meets the wind, the sky. The sacs go from gray and heavy to having the softest, whitest dead heart, a heart of fluff. Do spiderlings die or are they just not given a chance, a perfect array of circumstances that favors emergence and flying?

I mark seasons with spiders—sac spiders pale and wandering in the spring, giant grass spiders in their flat and funneled autumnal webs, false widows shy and blind after days of rain, orbs and wolves heavy in the heat of a summer night. Marking change, emergence, and return. The habit of seeing a spider becomes a habit of noticing the presence of God.

A sudden recognition, a shift of light, a startle caused by recognition of another’s presence. Oh, there you are. I was wondering where you’d been.

It is hard to love spiders, to be a bleeding-heart for them. Early on, many people are taught to be frightened or taught that love is a weakness, or worse, misdirected. We’re taught that if you don’t love the right things in the right way, you are irrevocably wrong. You learn that your love teaches others how to cause you pain by harming what you care about.

I see in them my own worry—not only my worry of being harmed or having the space I call mine occupied by another’s scurrying—but my fear of making manifest all the destruction of which I’m capable. Fear of my image reflected back as monstrous, as destroyer who acts to assuage discomfort. Fear that I’ll narrow down the already infrequent circumstances in which I get a glimpse of that uncomfortable, startling God.

“What we conserve defines what we are or pretend to be,” wrote evolutionary ecologists François Sarrazin and Jane Lecomte last year in “Evolution in the Anthropocene,” published in Science. Though they argue that we must come to a place where we ask not why we conserve, but why we destroy.

“Ask the animals, and they will teach you,” pleaded Job in the throes of watching all he loved crumble.

Looking back on a hard time—panic attacks that didn’t stop, an irritable heartbeat whose meaning I couldn’t parse—I see only the images I’d grasped, looking for anything to heal or distract me, using gaze as a prayer or as hope that I might recognize God somewhere. And now when I see S grossa, she’s a friend, a reminder after the rains: Oh, there you are.

Much of conservation has been about studying the impacts of human modification. Rather than consider the evolutionary trajectory of creatures—in other words, their potential, their vast futures, their right to their bodies and their movements—we’ve assigned them worth based on their capacity to harm, their usefulness, or their attractiveness.

“[Conservation] requires an interspecific form of altruism to achieve neutrality on nonhuman evolutionary trajectories, whatever our genetic distance toward nonhumans, the services we expect from them, their beauty, or our need for nature,” Sarrazin and Lecomte argue.

I often wonder at the simplicity of the Gospels, at the notion of God incarnating and then spending much of his bodily time making pretty obvious statements. Be kind. Respect children. Money and power make trouble.

But then I think on whether that peaceable man was asking not for people to bestow the small salvations of which they were capable, but asking them to consider why they destroy over and over again. Consider why we grow afraid and crush and stomp and bomb and say we are only being responsible.

The love of God is scattershot. It is the love of the artist toward her work or the girl toward her spiders: neither dependent on usefulness, beauty, compliance, nor comfort. It’s the love that asks why destroy? and finds myriad reasons but chooses against them, the love that writes the Oh, there you are prayer in the heart.

Above image by Nicolas Lannuzel, used with permission under a Creative Commons License.